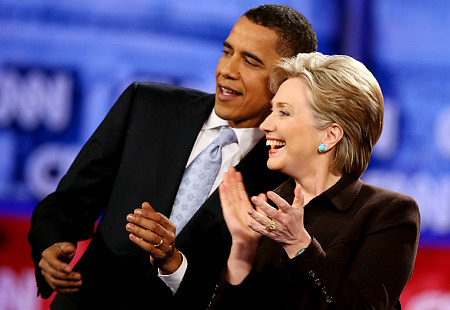 The desire to rule is the mother of heresies. —St. John Chrysostom

In a recent speech imploring people not to be cynical about DC politics, President Obama admitted to past devious statements and political ploys when he declared, "I'm just telling the truth now. I don't have to run for office again, so I can just let her rip." [Wow.]

The President’s quote is totally consistent with Hillary Clinton and President Obama admitting they made major decisions on the Iraqi war for their political gain. Retired Secretary of Defense Robert Gates was dismayed by their behavior. As I previously wrote:

Former Secretary of Defense Robert Gates witnessed Hillary Clinton tell President Obama that she opposed the 2007 surge in Iraq because he was running against her in the Iowa primary. Gates reported, “Hillary told the president that her opposition to the [2007] surge in Iraq had been political because she was facing him in the Iowa primary. . . .” Keep in mind, Clinton had previously supported our war in Iraq.

Gates recalls Obama's response to Clinton's admission, “The president conceded vaguely that opposition to the Iraq surge had been political. To hear the two of them making these admissions, and in front of me, was as surprising as it was dismaying.”

**Dismaying is an understatement! ** Try, appalling or horrific. Two of the most powerful people in the world admit political ambition influenced a momentous policy discussion. Policies changing the lives of millions of people. Life and death decisions impacting thousands of Americans and Iraqis. Policy edicts that disrupted and destroyed lives throughout the Middle East – Libya to Afghanistan. Lethal government force that will have enormous repercussions for many years to come to the people in harms way and the United States.

"The aim of every political Constitution, is or ought to be first to obtain for rulers men who possess most wisdom to discern, and most virtue to pursue, the common good of society; and in the next place, to take the most effectual precautions for keeping them virtuous whilst they continue to hold their public trust."

Of course, Mr. Obama also repeatedly said, “You can keep your insurance and your doctor.” He has also asserted, that there is not even a smidgen of corruption at the IRS...then there is the Benghazi cover-up. Enough said.

America is badly in need of virtuous people to become elected leaders. These days, very few politicians are virtuous and even fewer are virtuous whilst they continue to hold their public offices.