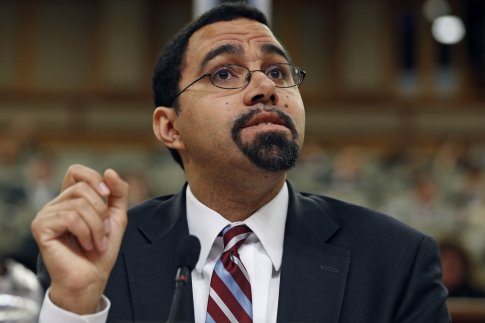 Meet the new boss, same as the old boss.

We want to see more states build comprehensive systems that track students from pre-K through college and then link school data to workforce data. We want to know whether Johnny participated in an early learning program and completed college on time and whether those things have any bearing on his earnings as an adult.

In short, Duncan was a huge enemy or parental rights and local control of education. He will not be missed.

Unfortunately, that’s where the good news ends. To replace Duncan, President Obama is appointing John B. King, Jr., the number two man at the Department of Education to serve as a “temporary” replacement, where “temporary” refers to the remainder of Obama’s term.

King was formerly Commissioner of Education in New York State, where he feverishly advocated for Common Core and shut down hearings on the matter when he got too much pushback from opponents. He was also the target of a lawsuit from New York parents attempting to protect their children’s privacy from controversial data collection, a suit that was unfortunately dismissed.

John King is likely to be no better than Arne Duncan, and under normal circumstances we would urge Senators not to confirm his nomination and demand the job go to someone with at least a modicum of respect for parental rights and state autonomy. There’s just one problem: they’re not being given a chance to object.

Article II, Section 2 of the U.S. Constitution gives the president the power to appoint public officials with the advice and consent of the Senate. This means the Senate gets a vote on all appointments of cabinet secretaries. But since King’s appointment is only “temporary,” the White House is simply skipping this crucial step, denying the Senate it’s constitutionally protected role.

An unnamed GOP Senator summed the situation up perfectly, saying: "It's unsurprising that this administration is blatantly disregarding the constitutional requirement for the Senate's role on advice and consent of a cabinet secretary. So much for the so-called constitutional scholar in the White House."

It’s outrageous that the administration would violate the separation of powers in yet another way, and an unbelievably bad precedent to set. Congress has already ceded enough of its authority to the White House. We can’t tolerate still more abuse of the Constitution and the usurpation of congressional power by the presidency.

Typical acts from the most corrupt administration in our nations history; laws are for those who have a conscience and believe in freedom and liberty for the American people. Democrat's in general and the Administration do not hold those views and choose to abuse their power without end.

Had this occurred under a Republican administration, there would be hell to pay coming from the Democrat party and lamestream media hacks but with this administrations unconstitutional acts almost on a daily basis we generally don't hear anything about their party needing to do the right thing and go before Congress to get approval.

The Democrat party has lowered itself into being the protector of the criminal element of society, the public, mostly law abiding citizenry, they say to hell with them; the ends justify the means.

How many Republicans have been put on the spot to comment about "How long is a temporary appointment good for?" ?

On behalf of FreedomWorks’ activist community, I urge you to contact your senators and ask them to vote YES on H.J.Res. 57. This resolution of disapproval under the Congressional Review Act would cancel the Department of Education’s Accountability and State Plans Rule.

On behalf of FreedomWorks’ activist community, I urge you to contact your representative and ask him or her to vote YES on H.J.Res. 57, when it comes to the House floor for a vote on Tuesday. This resolution of disapproval under the Congressional Review Act, which gives Congress authority to effectively nullify regulations submitted for review by federal agencies within 60 legislative days, would cancel the Department of Education’s Accountability and State Plans Rule.