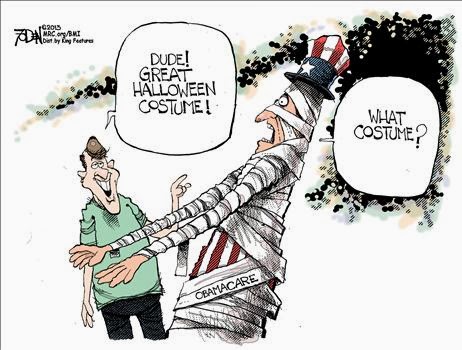 Back in 2010, during an interview on Fox News' Red Eye, Glenn Danzig, whose band, the Misfits, basically founded the horror punk genre, was asked if he'd ever do an album with songs about "puppies and rainbows." Danzig, known for his dark and controversial lyrics, snarked, "Maybe I’ll do a real horror record and talk about the Obama administration."

Danzig would have no shortage of material. From a gutting of the Constitution that would make Freddy Kruger blush to the blood-red river of debt flowing from Washington, the Obama administration's actions will haunt Americans long after its gone. But there are enough frightening things about ObamaCare to fill one album.

Being a fan and all, here are some suggestions for Danzig if he decides to follow through:

A Fiscal House of Horrors: President Obama insists that ObamaCare will save taxpayers money, but the law is filled with gimmicks that make promises of deficit reduction utterly meaningless. In fact, a report released earlier this month by Republicans on the Senate Budget Committee found that ObamaCare will cost $311 billion more over the next ten years than the most recent estimate, driving up the budget deficit by $131 billion over the same time period.

The Army of Darkness: "If you like your plan, you can keep it." That was the promise President Obama and many Democrats made when ObamaCare was working its way through Congress. But the Army of Darkness -- regulators and bureaucrats in the Obama administration -- wrote law's grandfathered plan regulations so narrowly that millions of Americans lost their coverage last year, and hundreds of thousands more are expected to lose their health plans by the end of this year. President Obama's biggest supporters in the Senate voted to rubber stamp these regulations.

Zombie Subsidies: The text of ObamaCare states very clearly that the subsidies can only be doled out to consumers who purchase health plans on "an exchange established by the State," which is why a D.C. Circuit Court of Appeals panel, at least temporarily, determined that subsidies for plans obtained through the federal exchange were illegal. In 2009, then-Senate Finance Committee Chairman Max Baucus (D-MT), in a conservation with then-Sen. Jon Ensign (R-NV), admitted that the subsidies were contingent on states setting up their own exchanges. The architect of ObamaCare, MIT economist Jonathan Gruber, also confirmed this on multiple occasions, pointing out at times that it was a political move to pressure states into ObamaCare.

DraculaCare: Though ObamaCare apologists insist that the law is making health insurance more affordable, in reality, it's driving up the cost of coverage. It's true that ObamaCare' zombie subsidies that artificially lowers the cost of coverage for some by passing along the cost to taxpayers, but premiums have been driven up mandates included included in the law and by regulations written by bureaucrats. Health insurers are mitigating this by jacking up deductibles for health plans available on the exchanges. Like a vampire, ObamaCare is sucking dry many Americans' finances by forcing them to dip into savings or scale back on retirement contributions to help pay for medical care. Some are even going without care to avoid the costs of their high-deductible plans.

Frankencaid: Medicaid is a horribly broken single-payer, government-managed program. It's rife with inefficiencies, waste, and fraud. But rather than reform Medicaid, which even President Obama has conceded is a broken program, ObamaCare doubles down on it. Though many doctors accept Medicaid because of its poor reimbursement rates and bureaucracy, leading to a shortage of medical practitioners for patients covered under the program, the Obama administration is actually touting the 67.9 million enrollees in Medicaid. The program doesn't provide better health outcomes than being uninsured, according to a study published by the New England Journal of Medicine. In fact, there's evidence which suggests that there's a higher mortality rate for Medicaid patients treated for cancer than those who are private insurance. Medicaid patients are also more likely to die after a major surgical procedure, including heart procedures and lung transplants, than those with private coverage or no health insurance at all.