“The largest consolidation of personal data in the history of the republic.” ~ USA Today

Recently, the Citizens’ Council for Health Freedom posted an extremely useful chart titled “The Obamacare Hub – Transfer of Data and Dollars.”  The chart outlines the flow of data collected by the government under Obamacare.  It explains that the Obamacare Hub process begins when a person or employer enters private data into Exchange, the state website portal, in his or her state.  This information includes all the data needed for a person’s identity to be stolen, such as tax information, income, employment, patient medical records, social security number, welfare information, family size, and demographic data.

Once this incredibly personal information is entered into the Exchange, it is sent to the central server, the Federal Data Services Hub (the Hub), and other state data sources (e.g., Medicaid).   Next, the Hub connects with other federal agencies in order to transfer and validate everyone’s data, as shown below.

CCHF’s chart below shows how Obamacare will establish a central exchange for private information about every American citizen.  Unfortunately, this information is subject to security breaches by computer hackers: in 2012, the RAND Corporation reported that the federal government could be losing up to $98 Billion annually to Medicare and Medicaid fraud—largely because of theft due to personal information being taken from government databases.  Moreover, in light of recent events, especially the IRS scandal, do you really trust the government not to abuse your sensitive information?

[Note: See the attachment below for the full-sized chart.] 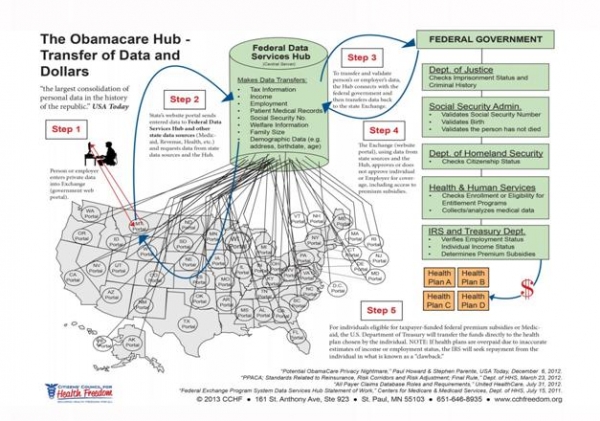 The hackers will feast on all this hub data at all the multiple data bases it will be at.
Each doctor office you go to, each hospital, State and federal agencies will be staffed by honest people but even if 1% (low in my estimation) are bad people. Some will sell SS #'s, some will throw a doc away or leave it out by mistake for the cleaning and janitorial staff to see. This is a big accident that WILL happen to a lot of people.
This so called cloud data will be target # 1 for the hackers that can steal OUR wealth away from the other side of the globe with just a few keystrokes.
It's one shop shopping for our big bucks and a license to steal from Medicare and even the IRS. Think of all the drop boxes to send the checks to the bad guys can invent.

upto I saw the paycheck saying $7223, I have faith that...my... mom in-law woz actually earning money part-time at their laptop.. there aunt had bean doing this for only 6 months and a short time ago repayed the loans on there condo and purchased themselves a Jaguar E-type. I went here, kep2.ℂom

Just a bit ago, I wrote that we broke 95,000 - that number has been left in the dust as the No Reconciliation petition has garnered over 100,000 signers!

Yesterday, I joined a record-breaking Lobby Day crowd of Virginians at the steps of the bell tower on Richmond's Capitol Grounds. I had the privilege to be one of the speakers who addressed the gathering on topics like the Tenth Amendment and its fundamental importance in our American system of divided sovereignty. They didn't need the lesson.

Big news from Richmond just a few short days before the 10th Amendment rally on January 18th. As reported by the Richmond Tea Party via Tertium Quids: