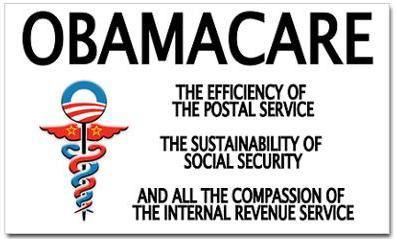 In 2013, the IRS itself estimated that the average taxpayer would spend 13 hours preparing and filing their taxes. That’s just the basic forms – for those who have different kinds of investment income, or lots of deductions, or who run a small business, the time and money burden grows much higher.

And that was before the IRS got into your health care.

The reason why ObamaCare compliance will be such a pain for everyone involved is the IRS’s complex formulas used to determine who is eligible for premium subsidies for their health insurance, and for how much. The final rule for who gets how much is a migraine-inducing 24 pages of fine print (if the IRS in your health care keeps you awake at night, you can read the rule HERE as a sleep aid).

And that’s after the IRS and the exchanges have sifted through an epic treasure-load of your data to determine that your insurance is compliant with ObamaCare’s coverage requirements. The IRS has to obtain your income and that of your household, your insurance premiums, the cost of the “second lowest cost silver plan (SLCSP)” in your exchange, the number of months out of the year that you’ve been covered, in order to put that information into a formula that spits out the amount of subsidies you’re owed.

Oh, and if you’re eligible for subsidies you need to provide a form from your exchange certifying that you have bought an appropriate plan, only there is some doubt whether the exchanges in some states will get those forms out in a timely manner.

Of course, if you’re one of those who still haven’t bought an approved insurance plan (because they’re really expensive, because your employer dropped you, because you’re a male and don’t need ob/gyn coverage, or just because you plain don’t want to), the IRS will set you straight with an individual mandate fine… I mean, a tax.

Send A Message: Get the IRS Out of My Health Care!
Tags ObamaCare, IRS, premium subsidies
Log in or register to post comments.
1 comments

I agree: GET THE IRS OUT OF MY HEALTH CARE, AND FOR THAT MATTER GET RID OF THE HMOs TOO! The old way back in the 70's before Nixon had talks with Mr. Kaiser of Kaiser Permanente, was better insurance and we could pick our own. Even the insurance employers offered was better than what we have now!