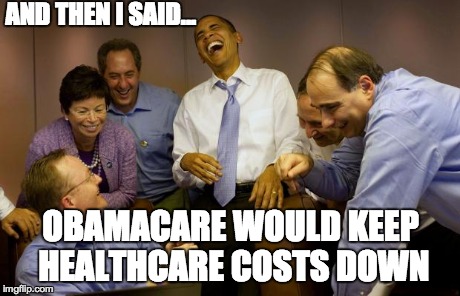 Though President Barack Obama and administration officials still insist that ObamaCare is keeping healthcare costs down, the percentage of Americans who have put off seeking medical care for themselves or family due to cost concerns has reached an all-time high, according to a survey released last week by Gallup.

In an October speech at Northwestern University, President Obama touted the "dramatic slowdown in the rising cost of healthcare," tying the phenomenon to ObamaCare. The suggestion, repeated ad nauseam by supporters of the law, is misleading to say the least. An analysis published this summer in Health Affairs concluded that the slowdown in healthcare spending is primarily a result of the Great Recession.

Still, though, the myth continues to be pushed. "[B]ecause the insurance marketplaces we created encourage insurers to compete for your business, in many of the cities that have announced next year's premiums, something important is happening – premiums are actually falling," said President Obama. "That's progress we can be proud of."

Gallup, however, finds that 33 percent of Americans have put off medical care because of cost, the highest figure in the 14-year history of the question. "Last year, many hoped that the opening of the government healthcare exchanges and the resulting increase in the number of Americans with health insurance would enable more people to seek medical treatment," writes Rebecca Riffkin of Gallup. "But, despite a drop in the uninsured rate, a slightly higher percentage of Americans than in previous years report having put off medical treatment, suggesting that the Affordable Care Act has not immediately affected this measure." While fewer households earning less than $30,000 are putting off medical care, Gallup shows that more middle class Americans are. Thirty-eight percent of Americans earning between $30,000 and $74,999 and 28 percent earning $75,000 or more report foregoing care in the last 12 months, up from 33 percent and 17 percent last year. Though most of the focus has been on premiums and subsidies, health plans on the exchanges are notorious for eye-popping out of pocket costs, the average of which increased by 42 percent compared to pre-ObamaCare plans. An Associated Press survey released in October found similar results, noting that Americans with high-deductible plans were more likely to forego seeking care in the event of a major medical problem. For its part, Gallup notes that the percentage of those with private coverage putting off care "may reflect high deductibles or copays that are part of the newly insured's plans."

No one disagrees that healthcare costs needed to be addressed, but ObamaCare -- with its expensive mandates and overbearing regulations -- only exacerbates the problem, creating a dangerous atmosphere for patients who have real medical needs that may go unaddressed because they're been priced out of seeking care.

Jason, send them to a Health Share organization. Send everyone to a health share organization! They will be so happy they did! Sort of like the old PPOs. But better! Less expensive. No Obamacare fines! I use LIBERTY Health Share dot org.
Just think, if everyone who actually pays into the system...left Obamacare...Obamacare would cease to exist. AND one of many perks is with LHS...People under 30 pay LESS!