Background: here is what I wrote for FreedomWorks over a year ago.

Bureaucracies are inherently bloated, inefficient monsters that, in the end, seek only to further bloat themselves. Any enterprise with a never ending supply of capital that it can extort through taxation has no motive whatsoever for behaving in an economically efficient manner and Obamacare has already proven that it will not be the exception to the rule. 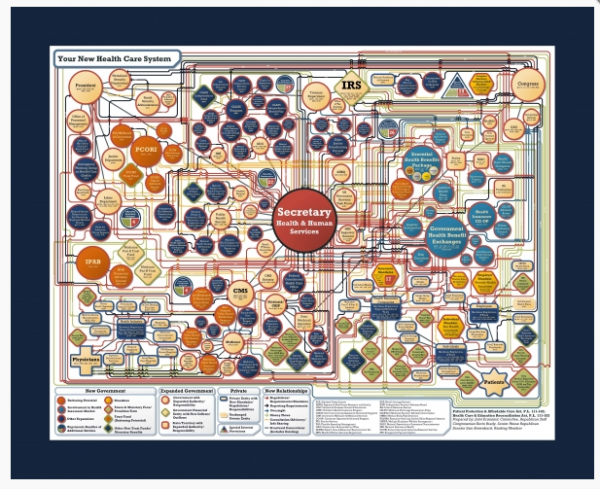 The elephant in the room that is never spoken about at the beginning of policy debates involving huge new layers of bureaucracy is the bureaucracy itself. We often get bogged down in the specifics of the program(s) being discussed and forget to address the overwhelming inherent problem. Of course, we get around to discussing these problems once the program is implemented because the bureaucratic elephant in the room is also blind, has a broken ankle and invariably crushes us.

The Obamacare rollout has been such an unmitigated disaster that the Obama advocacy fan club in the press has been forced to take note. Some have even resorted to mocking, which is standard for the press much of the time, but practically unheard of with this president.

The Miami Herald twice endorsed Obama for president and here is what it had to say about the Obamacare rollout:

Nearly two weeks after the federal government launched the online Health Insurance Marketplace at HealthCare.gov, individuals who have successfully used the choked-up website to enroll for a subsidized health insurance plan have reached a status akin to urban legend: Everyone has heard of them, but very few people have actually met one.

Full time Obamacare cheerleader Ezra Klein has been all over the place lamenting the utter failure of ACA's first couple of weeks.

We're now negative 14 days until the Affordable Care Act and most people still can't purchase insurance. The magnitude of this failure is stunning. Yes, the federal health-care law is a complicated project, government IT rules are a mess, and the scrutiny has been overwhelming. But the Obama administration knew all that going in. They should've been able to build an online portal that works.

Early on, President Obama like to compare the launch of the Affordable Care Act to Apple launching a new product. Can you imagine how many people Steve Jobs would've fired by now if he'd launched a new product like this?

What's abundantly clear to anyone who reported on the run-up to the federal health-care law's launch is that the White House had no idea how badly the Web site would perform. They expected problems. But the full extent of the disaster was either obscured or ignored. Heads should roll for that. Changes should be made because of that.

(Quick aside: two typos in four paragraphs there. Doesn't WaPo have editors or spell-check?)

Let us keep piling on while the piling on is good.

Check out this headline from The Atlantic.

Healthcare.gov Was Crippled by Bureaucracy from the Start

And just where is The Atlantic finding source material for this piece? From the noted Right Wing Nutjob publication the New York Times.

In March, Henry Chao, the chief digital architect for the Obama administration’s new online insurance marketplace, told industry executives that he was deeply worried about the Web site’s debut. “Let’s just make sure it’s not a third-world experience,” he told them.

Two weeks after the rollout, few would say his hopes were realized.

The awareness, however brief, by stalwart big government champions of the problems of bureaucracy may be a small victory, but we should see it as a victory nonetheless. Of course, they don't quite make the extrapolation from "bureaucratic difficulties hampering site functionality" to "bureaucratic difficulties hampering decisions about kidney transplants" like they should. Bless their hearts, the lovers of big federal programs seem to think there are several federal governments in the United States. That's how they can be both for Obamacare and aghast that the NSA is creepy when it comes to privacy. One of those federal governments is nice...see?

Where this works as a victory for smaller government types like us will be better seen in battles yet to come. This is all playing out in the digital/social media age, unlike the freedom and personal capital choking federal omnibus nightmares that have gone before. Because of that, we have quite the body of evidence for both the warning and "I told you so" phases. And we will continue to gather evidence for the  latter phase as this law will continue to be a bureaucratic swirl down the low-flush toilet.

In future debates where new layers of bureaucracy are being proposed as a way to introduce efficiency, savings or competition we have only to point to this well-documented "Yeah, about that..." argument.

Once we have stopped laughing at the very suggestion that a bureaucracy can do any of those, of course.

It's Cyber Monday, Is the ObamaCare Website Ready to Deliver?

President Obama: "I am accused of a lot of things but I don't think I am stupid enough to go around saying this is gonna be like shopping on Amazon or Travelocity a week before the website opens if I thought that it wasn't gonna work." What if companies competed to sell health insurance on functioning websites like Amazon or Travelocity?

Recent testimony before Congress has revealed that more than six weeks after launch, the administration is not ready to perform key operations of Obamacare. The backend payment system for delivering subsidies to insurers has not yet been built. There is no way for any of them to pretend they didn't know it wasn't ready.

0
11/20/2013
The Demise of Print Media on the West Coast
"https:\/\/www.freedomworks.org\/content\/demise-print-media-west-coast?social=facebook_share"
null
https://fw-d7-freedomworks-org.s3.amazonaws.com/styles/thumbnail/s3/te_social_media_share/fw_default_0.jpg?itok=35IWEBMb
Blog

The Demise of Print Media on the West Coast

Last week, The Oregonian newspaper announced that it was cutting print circulation to 4 days a week, laying off most of its staff, and forming a new digital news company.  In a mostly tacit, but sometimes explicit admission that print media is facing its demise, the oldest newspaper on the West Coast confirmed that the future is in digital publishing.

The Fallacy of the ObamaCare Exchange System (Connecticut)

The Fallacy of the ObamaCare Exchange System (California)

1
06/21/2013
Will An Updated Marketing Effort Help the NRSC In 2014?
"https:\/\/www.freedomworks.org\/content\/will-updated-marketing-effort-help-nrsc-2014?social=facebook_share"
null
https://fw-d7-freedomworks-org.s3.amazonaws.com/styles/thumbnail/s3/te_social_media_share/fw_default_0.jpg?itok=35IWEBMb
Blog

1
05/31/2013
Why Do We Do This? My Answer to Glenn Beck
"https:\/\/www.freedomworks.org\/content\/why-do-we-do-my-answer-glenn-beck?social=facebook_share"
null
https://fw-d7-freedomworks-org.s3.amazonaws.com/styles/thumbnail/s3/te_social_media_share/fw_default_0.jpg?itok=35IWEBMb
Blog

Why Do We Do This? My Answer to Glenn Beck

At BlogCon in Dallas, many of us had the unique opportunity of being in the studio audience for two tapings of the Glenn Beck show at TheBlaze Studios. During a panel discussion on the harassment and intimidation faced by conservative bloggers, Glenn challenged us.