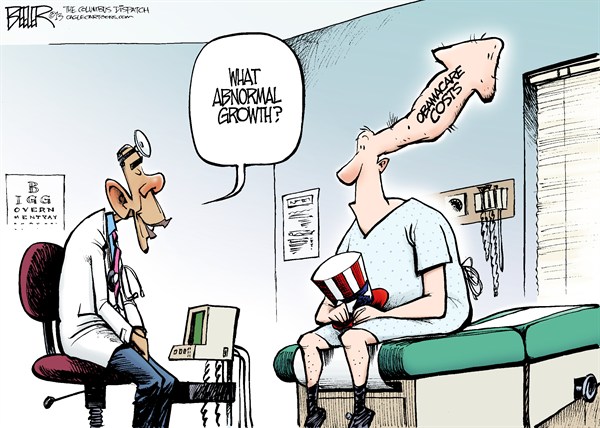 One of the ways the Obama administration managed to get ObamaCare through Congress was by keeping the cost of the law under $1 trillion. This was accomplished through various budget gimmicks and backloading costs in years at the end of the original budget estimates. These deceptive tactics are how the administration managed to get a score from the Congressional Budget Office purporting that ObamaCare would reduce the deficit by $124 billion.

According to the CBO's latest report on the federal budget, the cost of ObamaCare's coverage provisions -- including subsidies and Medicaid expansion -- will cost nearly $2 trillion between FY 2015 and FY 2025. Tax provisions -- including the individual and employer mandates and the Cadillac tax -- will bring in $677 billion over the same timeframe. The CBO didn't update ObamaCare's effects on other areas of the federal budget, such as Medicare, that are, supposedly, going to lower the budget deficit. Remember, the changes to Medicare were a big part of the cost-savings used to push the law through Congress. There was, however, doubt cast on these savings in the July 2014 actuarial report released by Medicare trustees.

"While the ACA has been successful in reducing many Medicare expenditures to date, there is a strong possibility that certain of these changes will not be viable in the long range," wrote Paul Spitalnic, chief actuary for the Centers for Medicare and Medicaid Services. "Specifically, the annual price updates for most categories of non-physician health services will be adjusted downward each year by the growth in economy-wide productivity."

"The ability of health care providers to sustain these price reductions will be challenging, as the best available evidence indicates that most providers cannot improve their productivity to this degree for a prolonged period given the labor-intensive nature of these services," he added.

The administration may continue to claim that ObamaCare is cutting the deficit and improving the long-term viability Medicare, but the reality is this program is unsustainable, and it's going to remain that way until there are fundamental, pro-growth reforms to it. Unfortunately, that's may not be something that most Americans see until the healthcare system begins to collapse on itself.

Obala care is not about health care