Obamacare: A Tax on the Poor

The Obamacare individual mandate will disproportionately affect those who can least afford it. Rather than simply allow people to buy health insurance if they wish to do so, the "Affordable Care Act" imposes a fine if you don't. But for many people without means, the insurance, even with subsidies, will be too expensive. The law amounts to a tax on being poor -- a Poor Tax.

Obamacare operates, in broad outline, by a combination of several factors: 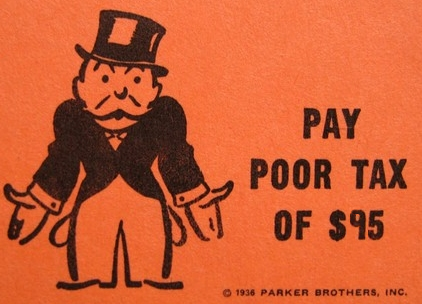 One of the rules says those not eligible for Medicaid who don't get employer-sponsored insurance have to pay for health insurance themselves, or pay a fine of $95 or 1% of their income, whichever is greater.

But in the lives of a lot of people who will be subject to the exchanges, the money comes in on Friday and it's gone by Thursday. About a third of Americans have no savings, beyond saving for the rent or car payment. There is no extra money in the budget at all. The only extra money a great many people ever see is their tax refund.

Individuals and families who make below about $60,000 per year will get "premium assistance tax credits" of some amount, or rather, their insurance company will get money from the government to offset their premiums.

In any case, the insurance won't be free. People will have to pay something, whether it's $10 or $400, or what the law considers to be affordable. The definition of "affordable" in "Affordable Care Act" is 9% of monthly income.

So Obamacare presents people with a choice they can't make: either to spend their last $10, $50, or $400 on health insurance each and every month, or have the government take 1% of their income -- not their refund, but their income -- out of their tax refund. That Poor Tax will rob many people of even the one bit of happiness they pursue enough to catch.

Many believe the individual mandate is all that holds the law together. But people who can't afford health insurance are not going to buy it just to get a tax refund. If someone can't afford it, they can't afford it. Many already know they won't take out insurance, and more will decide against it once they find out what it's really like.

Insurance companies are going to find it difficult to collect their premiums, too. People who have to scrounge for their last $50 to pay a premium will sometimes not be able to come up with it, leading to all kinds of collection troubles.

Smart politicians should want to avoid people blaming them for being hounded by another bill collector.

The Poor Tax is a cruel policy, one I urge Congress to repeal. If they won't repeal it, they should at least delay it until we see how well the rest of the law works out.

You and me both, Christy.

FreedomWorks has organized against dozens of cigarette taxes in the past year.

0
07/22/2009
Raise Your Hand if You're Unsure
"https:\/\/www.freedomworks.org\/content\/raise-your-hand-if-youre-unsure?social=facebook_share"
null
https://fw-d7-freedomworks-org.s3.amazonaws.com/styles/thumbnail/s3/te_social_media_share/fw_default_0.jpg?itok=35IWEBMb
Blog

Unions and Free Market Activists Find Common Cause on Health Care, For Now

President Obama has stepped up his rhetoric against the health care system, but fiscal deficiencies in his plan for a government take over have become increasingly apparent in recent weeks. Now, some on Capitol Hill are toying with the idea of taxing employee health benefits to subsidize the cost of government-provided care. But, as Americans learned during the collapse of GM, many union labor agreements provide extremely generous benefit packages to workers who are unlikely to support any proposal that might put their compensation at risk.

West Virginia Activist Writes About Cap and Tax Next Steps

FreedomWorks Congressional Action Team member Alice Click was published over the weekend as a guest commentator in the Hinton News.  The article, "How do Higher Energy Costs Help Open Idle Steel Mills or Struggling Auto Makers" nailed the crux of the debate: the legislation kills jobs.  Click went on to urge readers to contact Sen. Rockefeller.

Dissent, Not Denial: Informed Opposition to the Science of Climate Change Is Growing

Beneath the surface of a Cap and Tax debate that has only just begun to rage in this country, a basic premise is largely being taken for granted. Prominent fixtures of the political class, from Al Gore to Newt Gingrich to John McCain, have accepted and declared as fact that the Earth is getting warmer, the icecaps are getting smaller, carbon is to blame, and only government can save the day.