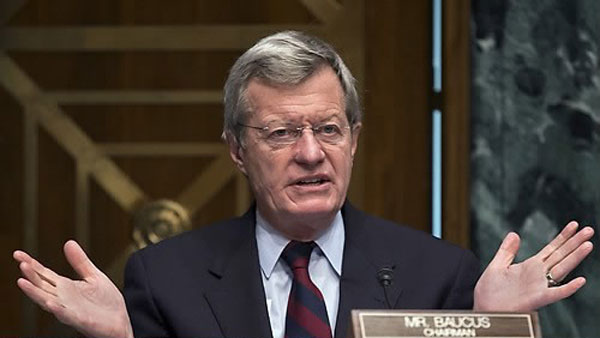 Rarely has such a major piece of legislation as the Patient Protection and Affordable Care Act (ObamaCare) been passed in such an overwhelming partisan way. Without garnering a single Republican vote, ObamaCare was rammed down the throats of the American people, even though a majority opposed - and continue to oppose - the law.

It was the kind of health insurance takeover the Democrats had been dreaming about since the failure of HillaryCare in the 1990s. One would think that finally passing a such a sweeping new entitlement program would have been met with unanimous joy on the part of the Democratic Party. In fact, for a while, it was.

But politicians, however ideological, are ultimately accountable to the voters, and at a certain point they are bound to realize that they need to win reelection if they hope to continue their reign of government meddling. It is at this moment, when even the most dedicated lefty may be able to see glimpses of reason through their utopian eyes.

Here are five Democrats who have started to see the light on ObamaCare:

Last year, Sen. Chuck Schumer surprised everyone by criticising members of his own party for ramming ObamaCare through Congress in 2010. Pointing out that in 2009, Americans were reeling from a terrible economy, he argued that Democrats “put all of our focus on the wrong problem—health care reform."

"When Democrats focused on health care,” he continued, “the average middle-class person thought, 'The Democrats aren't paying enough attention to me,' "

After the disastrous debut of Healthcare.gov, then-Sen. Max Baucus, one of the ObamaCare’s biggest supporters, expressed grave concerns over the implementation of the law, and how it was impacting small businesses.

“When I am home,” he said, “small businesses have no idea what to do, what to expect. They don't know what affordability rules are; they don't know when penalties may apply. They just don't know.”

He then went on to deliver the quote that would make headlines: “I just see a huge train wreck coming down.”

Once a champion of ObamaCare’s individual mandate, Senator Ron Wyden of Oregon sought an exemption from the mandate in his state. “I believe that the heart of real health reform is affordability and not mandates,” Wyden wrote in a letter to the Oregon health authority director.

A couple of years later, Wyden expressed worry over the impact ObamaCare was having on young people, saying, "There is reason to be very concerned about what's going to happen with young people. If their (insurance) premiums shoot up, I can tell you, that is going to wash into the United States Senate in a hurry.”

In a desperate effort to win his Senate race in 2014, former Iowa Rep.Bruce Braley called ObamaCare “a big failure” in his state. He was completely right, but his flip-flop wasn’t enough to stop him from losing to Joni Ernst in November.

Before his retirement, the former West Virginia senator was one of ObamaCare’s biggest supporters, even going so far as to imply that opponents of the law were racists. But in 2013, Rockefeller acknowledged that the Affordable Care Act is one of the most complex and bloated laws Congress has ever passed.

The retiring senator warned that the law was "so complicated and if it isn't done right the first time, it will just simply get worse." He went on to call the law’s complexity “beyond comprehension.”

When even the people who wrote and passed the law start seeing the cracks, you know you’ve got a bad piece of legislation on your hands. And although some of these politicians had blatantly opportunistic and self-serving reasons for their comments, it just goes to show that, any way you look at it, ObamaCare is just plain bad policy. That’s why, as we lament ObamaCare’s five years of regulatory train wrecks, FreedomWorks has released ten principles for replacing the law with real, patient-centered reform.