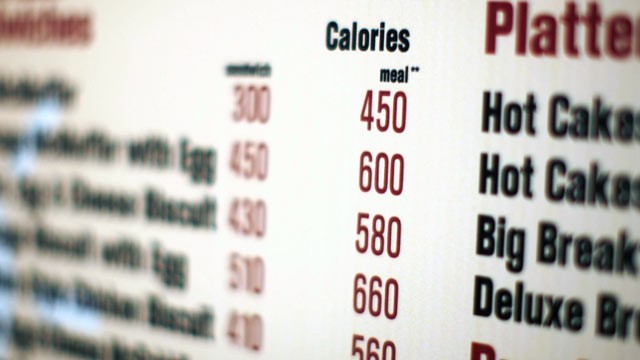 The Food and Drug Administration is going to try its hand at shaming consumers into making healthier choices when they go out to eat.

Just before the Thanksgiving holiday, the FDA announced a controversial and expansive rule that will require certain establishments with 20 or more locations -- including chain restaurants, grocery and convenience stores, and movie theaters -- to post calorie information on their menus and menu boards. A separate rule was also issued requiring operators of 20 or more vending machines to post calorie information.

The FDA estimates that the national calorie labeling mandates will cost affected industries nearly $1.7 billion over the next 20 years, substantially higher than the regulations the agency initially proposed in 2011. This cost estimate is probably conservative. The Food Marketing Institute says compliance costs will run in excess of $1 billion in the first year alone.

And though the FDA claims that the public health benefits of the regulations are greater than the costs, the evidence suggests otherwise. While these new mandates regulations may make nanny state lawmakers and bureaucrats feel good about themselves, similar schemes concocted by state and local governments around the country have had next to no impact on consumers' dining choices.

In New York City, for example, researchers discovered that consumers actually ordered fast-food menu items with more calories after its labeling requirements went into effect. "We found that 27.7 percent who saw calorie labeling in New York said the information influenced their choices. However, we did not detect a change in calories purchased after the introduction of calorie labeling," wrote Brian Elbel of New York University in Health Affairs. "People in New York City purchased a mean number of 825 calories before menu labeling was introduced and 846 calories after labeling was introduced."

It doesn't take rocket science to know that a Burger King Whopper, a Wendy's Baconater, or a Domino's pizza probably aren't the best meals for consumers concerned about calories. Many chain restaurants have responded to consumer demand with lower-calorie options included on their menus. Demand drives the market to respond. Overbearing government mandates, however, will not only hit businesses with costly regulations but also reduce healthy options consumers would've otherwise had.

This isn't about calories or cholesterol ! This is about freedom and control.... I listen to Rush

The government should be thankful citizens can afford to go out to eat..gym memberships should be more affordable .that would encourage people to go workout. And if the government is really concerned a out calorie in take the should remove energy drinks soft drinks candy and chips from food stamps

Want to know how to MAKE Obamacare fail? Leave Obamacare and all the costs...and go to a Health SHARE organization! Leave Obamacare in the wind! I use Liberty Health Share dot org and I am so happy! I am not advertising for them...I mean it! I wish I had joined them 10 years ago! They do not advertise. So check them out!

Next thing they'll be dictating what can be served in restaurants, etc based on nutrition facts. "Be well..." as in Demolition Man, if it were the case.