Occupy Wall St. and the Tea Party: A Tale of Two Protests

For all their contrived displays of independence and non-conformism, the Occupy Wall St. protesters can’t even properly be called original. For one thing, Communism, their preferred ideology, was thoroughly discredited more than two decades ago, while most of the occupiers were still in diapers. For another, virtually their entire list of grievances against crony capitalism and bank bailouts has been plagiarized straight from the tea party’s platform, which is now nearly three years old.

If they had such a principled opposition to bailouts and corporatism, where were these occupiers in 2008 and 2009? Where were they in 2010? Rather than waiting around for hope and change, perhaps Occupy Wall St. should have been on Main St. with the tea party protesting bailouts before their disastrous economic consequences became readily apparent.

These shallow, disenchanted hipsters have confused informed political activism with tweeting trite condemnations of “capitalism” from their iPhones. While I hardly expect intellectual consistency from such a group, much less an understanding of history, economics or human nature, it seems worth taking a moment to list just a few of the times FreedomWorks stood up against exactly the kind of cronyism the occupiers are now protesting.

Each of these horrible policies was implemented by the federal government, and each goes to the heart of Occupy Wall St.’s frustrations. Yet when FreedomWorks and millions of other Americans were fighting against them the occupiers were nowhere to be found.

Still, they’re here now and that’s fine. Those of us trying to restore the rule of law need all the help we can get. The problem is that the media seems intent on portraying Occupy Wall St. and their complaints as somehow unique. They are not.

Millions of us have been angry about bailouts for years. Not only that, but we’ve been proactively working within the political process to stop them. Occupy Wall St. is welcome to join the club, but please, do us all a favor and learn to clean up after yourselves. 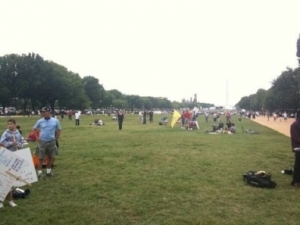 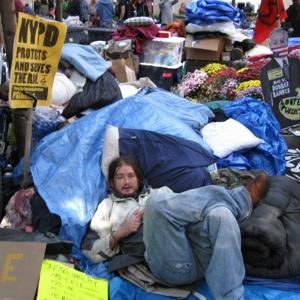 How corrupt is the UAW these days with Barack Obama as President? Very corrupt and here is proof. No wonder citizens throughout America despise the UAW and Unions as a matter of fact.

4. The Letter by the UAW: http://the99spring.com/letter.html - Notice on the right hand side of the letter where Communist Van Jones endorses this Occupy Movement, along with a couple dozen Socialist/Communist supporters.

Obami could of been a Rock Stare. Now he and his are Traitors, raicests and muslims. And I dont believe hes a American. No American would call the American People the Enemy. Now we must take our Great Country back. Vote. I hope some of Obami's "new black panther's party" get in my way when I Vote. God Bless Brothers and Sisters and Thank You For Fighting the Good Fight!! We will either save America or go to War, China/Russa/ "Who ever", Forien or Domestic. Yes, I'm a Vet. By Home Land Security, #1 threat in America. Lots of Love, John Wech

interesting to see that the occupy wall street movement is oh so understood and even ok'd by the current government.these people leave a damn mess,hurt businesses around,annoy nearby residents not to mention the costs for cleanup etc. and they wonder about getting hurt by police- this whole thing(wonder that this is legal) should've been shut down a long time ago.
to the other commentators here:Ron Paul has some points-whatsoever sometimes he's just a loon and i think it's good that Freedomworks,Tea Party,...doesn't 100% support him.also i think it was good not to support nearly any of the republican candidates so far-foremost Romney.
to change the Washington Monster Machine it's gonna take time meanwhile everybody should just call,email,try to learn etc.
no matter how you see this:the Tea Party had an enormous impact.awareness is definitely raised by now.also there are a lot of politicians in Washington who vote on key issues like i would vote.

The biggest difference was that the Tea Party was trying to make legitimate changes that could be accomplished. The majority of the Tea Party is made up of Americans with jobs and it had specific goals. the occupiers on the otherhand just want to blow up the system without any specifics on what they want other than for free handouts and that apparently their unemployed asses pay more taxes than the rich....

I agree, the Tea Party has been hijacked. We do need to come together and defeat corportism. If it wasn't for Ron Paul the Tea Party posers wouldn't have anything to talk about ala Perry, Huntsman, Cain, Baachman and Santorum.

The parallels are there, but I don't want to be attached to this movement as it stands and hope that others feel the same. I'm proud to be a "teapartier" because the approach is targeted, consistent and peaceful. I am convinced this is all directed to a less than desirable outcome and for that we need to be vigilant and continue wisely.

Umm, let's look at the facts, the Tea Party wasn't legitimized until about 10 months ago. It was only after that acknowledgement did the Tea party start working politically. And as far as I am concern the Tea party is now just a guise for social conservatism. I know this because the Tea party doesn't %100 support Ron Paul, and should/ is the leader, he was to first to champion the ideas. So far as I am concerned, the Tea party has been hijacked, and is more destructive than constructive. Let's say you are right and the left is late getting on the bus, SO WHAT? Isn't this the best time to come together as people regardless of previous political background? We are all mad about the same thing.
It's more concerning that the right doesn't support the occupy movement. But it makes sense because the Republicans don't want to lose their corporate endorsements, as result Republicans have been persuaded to disapprove of the occupy movement. Pull your heads out of the sand, GOVERNMENT AND CORPORATIONS ARE IN BED TOGETHER AND THEY ARE EXPLOITING EVERYONE!

As Suspected, OWS Was Populated by White Guys with Money

Don’t pretend you didn’t notice. It’s ok, we all did. Those Occupy Wall Street folks, the trod-upon masses who just wanted a fair shake didn’t seem quite authentic. Watching the footage, you might have noticed the ubiquitousness of North Face jackets. You might have seen their iPhones and video cameras or their Macbooks. Maybe you saw that OWS seemed to feature a whole lot of white men for such a diverse city.

Should a wealthy family relinquish the rewards of hard work?

What if I told you that a graduate of a private college-prep high school, after racking up a 3.75 GPA and a standout career on the varsity football team, chose among many offers and accepted a full athletic scholarship to UCLA? Would this be news?What if I told you that he weighed offers from several FBS schools before choosing UCLA? Happens every day, right?

Wall Street Protesters Should Instead Focus on the Federal Reserve

I’ve been closely following the loosely organized Occupy Wall Street protests on social media sites over the past few weeks. Now, I’m all for citizen activism and freedom of assembly, but I’m still unconvinced that most of these protesters know what exactly they're protesting. They’re angry about the state of the economy and rightfully so. While I sympathize with their frustration towards our weak economy, their anger is largely misdirected. They would be better off to pick up and move their protests down a few blocks to the New York Federal Reserve building.