We get a lot of e-mails at FreedomWorks from people who want to know which economic policies we endorse and why we endorse them. This is a good thing. Economics is a specialty, and it does the republic no good when people pretend to understand economics but aren’t available to discuss their ideas. (This is only a slight jab at Paul Krugman’s debate jitters).

In the words of Austrian economist Ludwig von Mises,

People may disagree on the question of whether everybody ought to study economics seriously. But one thing is certain. A man who publicly talks or writes about the opposition between capitalism and socialism without having fully familiarized himself with all that economics has to say about these issues is an irresponsible babbler.

Thus today we are introducing a new project: “Office Hours with Dr. Brough.”

Wayne Brough, the Chief Economist and Vice President of Research at FreedomWorks, has decided to make himself available for weekly Q&A sessions. Each week we’ll post the questions we receive and detailed answers to them. We welcome supporters and opponents alike to send in any questions they have about the free market, economic history, or public policy, and we’ll do our best to answer everything to completion.

One of the most common e-mails we see: “Is Barack Obama’s recovery plan working?” We’ve answered that question below with 10 easy-to-read charts. And don’t worry — future Q&A’s will be more diverse and will encompass both graphics and longer explanations. 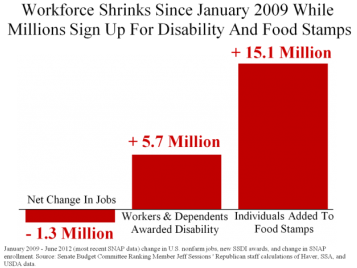 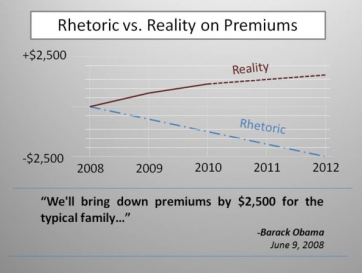 Christina Romer, the former Chair of Obama’s Council of Economic Advisers, warned that unemployment would skyrocket without the stimulus package. The administration spent $278,000 for each job ‘created/saved.’ Yet real unemployment — represented by black dots — is now even higher than their worst-case-scenario predictions. 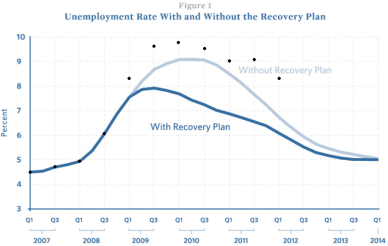 Gasoline prices aren’t actually rising. The purchasing power of the US dollar is in free-fall, though, and that’s why we keeping paying more at the pump. Obscene deficits and unfunded liabilities have driven investors away from our currency. This is one reason Iran began to seek oil payments in the Japanese yen.

In 2010, General Motors’ Chairman and CEO Ed Whitacre starred in a misleading commercial in which he claimed, “I’m here to announce we’ve repaid our government loan — in full, with interest, five years ahead of the original schedule.” However, they ‘paid back’ this loan with other bailout monies. The government still owns about 26 percent of GM, too, stock that (1) it needs to sell at $53.00 per share in order to break even and (2) closed this week at $23.68 per share. 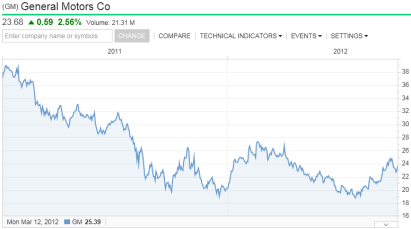 The Youth Misery Index has jumped 26 percent under the Obama administration.10 The Department of Education continues to inflate tuition costs with the help of financial aid packages and excessive Pell grants, and, as of July 2012, the youth unemployment rate stood at a dismal 17.1 percent. When isolated for African-Americans, it reaches 28.6 percent. 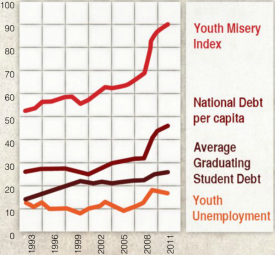 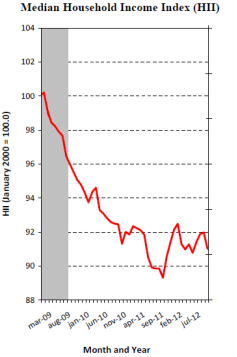 The national debt eclipsed $16 trillion in September 2012 after having risen by $5.4 trillion under the Obama administration. 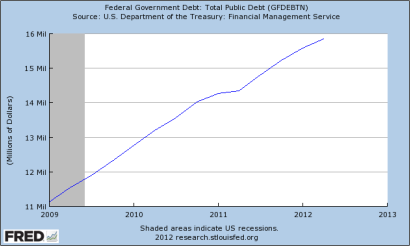 That concludes our first "Office Hours." As a reminder, feel free to send your own questions to OfficeHours@freedomworks.org, or tweet them to us at @freedomworks!

Brian, I forgot, please try to put this type information in a PDF also so we can print it out. I had the Clancy Obamacare PDF printed out in a 24 x 18 size poster and take it everywhere I go and show it at every opportunity so people know how many government agencies are involved in Obamacare and it really makes a huge impression.

Please keep it coming. Everyone can understand charts, Ross Perot almost won an election using simple charts and "would have" won it had he really wanted it. Most people don't have the time or tenacity to understand all of the data associated with this data but Simple Charts are powerful for the average person. Romney should have this type stuff as part of his everyday arsenal. Thanks and keep it up.

Delphi Pension Scandal: A Story That Should Be Bigger

While it's true that national campaigns, especially the presidential, have to focus on broader themes and stay on message, there remains a laundry list of specifics that down-ticket candidates and new media types could and should be relentlessly hammering away at. Most notable among the topics are the Fast and Furious scandal, the failure of Solyndra and other stimulus backed "green" initiatives and the cronyism involved in implementing the Affordable Care Act in the form of waivers to Big Labor and other strong Obama supporters.

1
08/23/2012
Harry Reid Is Back At It… Helps Chinese Solar Firm Represented By His Son
"https:\/\/www.freedomworks.org\/content\/harry-reid-back-it\u2026-helps-chinese-solar-firm-represented-his-son?social=facebook_share"
null
https://fw-d7-freedomworks-org.s3.amazonaws.com/styles/thumbnail/s3/te_social_media_share/fw_default_0.jpg?itok=35IWEBMb
Issue Analysis

In December 2010 it was revealed that top democrats, including Senator Harry Reid (D-NV), helped a Chinese firm get stimulus cash for a wind farm.

Before President Obama and Washington rejoice over the newly announced decrease in the unemployment rate they need to face a harsh reality: America is still not gaining jobs. In fact, the main reason unemployment “fell” is because the workforce has shrunk.

Key Vote NO on the American Jobs Act of 2011

Dear FreedomWorks member, As one of our million-plus FreedomWorks members nationwide, I urge you to contact your senator and ask him or her to vote NO on S. 1660, the American Jobs Act of 2011. Introduced by Sen. Harry Reid (R-Nev.), the bill would spend billions of dollars on infrastructure projects, raise income taxes and extend unemployment benefits. The so-called jobs plan which was proposed by President Obama will inevitably fail to stimulate the economy. The American Jobs Act of 2011 will crush jobs, increase our national debt and raise taxes on small business owners.

McCaskill Sides with EPA Rather Than Economic Growth While the Environmental Protection Agency’s regulation waves are stirring up in Washington, America is begging for a life saver. However, with politicians like Sen. Claire McCaskill (D-MO) aboard the good ship S.S.

Solyndra is the latest in the long list of “green energy” companies that have failed after being artificially propped up by the Obama administration. The solar panel manufacturer that received more than $500 million in federal “stimulus” loans declared bankruptcy a couple weeks ago.

Dear FreedomWorks member,  As one of our million-plus FreedomWorks members nationwide, I urge you to contact your Representative and ask him or her to vote YES on H.R. 2587, the Protecting Jobs from Government Interference Act. Introduced by Rep. Tim Scott (R-SC), the bill would prohibit the National Labor Relations Board (NLRB) from ordering any employer to close, relocate or transfer employment under any circumstance. The Protecting Jobs from Government Interference Act would help ensure that the government agency does not over step their bounds by dictating decisions made by private sector companies.

President Obama’s big job speech last week sounded more like yet another campaign speech. In typical Obama fashion, it was full of grand promises without much substance. He introduced his American Jobs Act with lots of feel good rhetoric minus the useful details of the costly plan.

They Took Our Jobs!!!

“They took our jobs!!!”  This is the mantra that the creators of South Park have so endearingly given to middle class America.  However, despite their malicious intent, they may have stumbled across something.  Today, the Bureau of Labor Statistics released the new economic data for the month of June and the http://www.bloomberg.com/news/2011-07-08/u-s-payroll