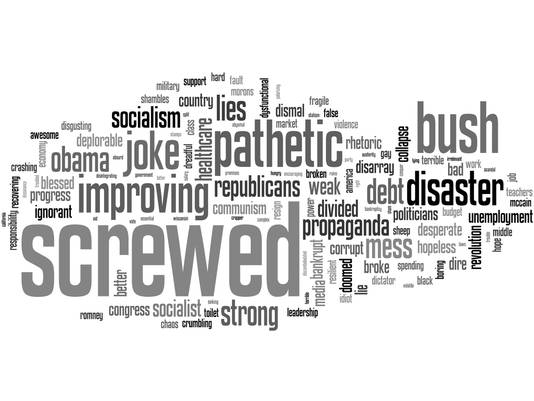 The state of the union is “screwed.”

That’s according to USA Today, which asked social media users to describe the state of our union in a single word. Other popular descriptors weren’t much better, including “pathetic,” “joke” and “disaster.” (The word cloud to the right shows all the responses.)

Following a grinding election cycle, the mood of the American people is downright gloomy. While President Obama’s approval hugs a lukewarm 50 percent, the federal government as a whole is at 26 percent while Congress is mired at a dismal 14. Simply put, Americans have lost faith in Washington, D.C.

This is only natural since Washington has lost faith in governing, budgeting and everything else they are required to do. Their $16 trillion debt, $1 trillion-plus annual deficit, and refusal to get serious about either reflect a political class unmoored from reality and responsibility.

I would compare our leaders to drunk sailors, but that offends me as a former drunk sailor. When I was in the Navy, I could only spend what I earned and the meager credit MasterCard was foolish enough to give me. When Uncle Sam bellies up to the bar, he treats everyone to a keg, buys every tavern on the block, and promises a lifelong pension to all the barkeeps.

“Eat, drink and be merry for tomorrow we vote!”

Washington, D.C. was built on a swamp. Although the water was drained, the ethical muck and mire has only risen. We can't stamp out every bad deal, but we can help fix the Beltway's broken relationship with the American people. When we see our political leaders wandering on election year promises, let’s remind them of their vows. And if they keep flirting with the ditzy young Keynesians, we need to kick them to the curb.

The state of the union might look bad now, but we have the power to change it for good.