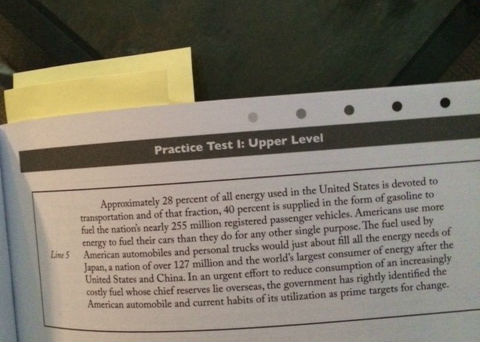 To help my son, I voluntarily took the first practice exam, which we purchased directly from SSAT.org. Shock was soon displaced by dismay as I labored through the reading comprehension. Within the nine essays presented were subjects on racism, an anti-Christian, sarcastic dig, environmentalism, class warfare, history revision, and collectivism. Any follower of current affairs recognizes these to be the influential tools of manipulation used by those of the progressive ideology. The shortest example follows:

“Approximately 28 percent of all energy used in the United States is devoted to transportation and of that fraction, 40 percent, is supplied in the form of gasoline to fuel the nation’s nearly 255 million registered passenger vehicles. Americans use more energy to fuel their cars than they do for any other single purpose.The fuel used by American automobiles and personal trucks would just about fill all the energy needs of Japan, a nation of over 127 million, and the world’s largest consumer of energy - after the United States and China. In an urgent effort to reduce consumption of an increasingly costly fuel, whose chief reserves lie overseas, the government has RIGHTLY (emphasis added) identified the American automobile and current habits of its utilization as prime targets for change.”

My first thoughts were, “Do any of the teachers and administration of these schools ever read these tests? Isn’t it presumptuous on the part of the creators to include politically charged, behaviorally persuasive essays for children in 8th grade?” This started me on a journey and here is what I found.

The SSAT board consists of 19 participants who mostly come from private schools across the country. I found that the board chair, Kilian Forgus, is a spokesperson for one of their 2014 annual meeting sponsors, inResonance. On the face of it, I see a financial conflict of interest. More concerning to me, though, is their keynote speaker, Charles Fadel, Founder and Chairman of CENTER FOR CURRICULUM REDESIGN.

On his website at [http://www. curriculumredesign.org/about/team/#charles](www. curriculumredesign.org/about/team/#charles), he is presented as a global education thought leader and expert who was the liaison with UNESCO, the World Bank and Change the Equation (STEM) while the Global Education Lead at Cisco Systems. Of the other six speakers, five had backgrounds in global aspects of culture, trade, demographics, marketing and business. Progressive ideology uses the word “global” freely as a euphemism for ”make everyone the same”. One of the speakers, Amy Wilkinson, recently spoke at a National Governor’s Association meeting, the birthplace of the national institution of Common Core.

Can anyone say CONNECTIONS? Are these the types of philosophies that influence the design of that test? After three hours of research, I stopped for the night, but I can tell you that I’m not done.

Ezra Taft Benson, Secretary of Agriculture for President Dwight D. Eisenhower, speaking at a conference on February 28, 1966 in St. Louis, Missouri had this to say,

“To take over our schools, the educational system will first have to be federalized and then prostituted entirely to serving the propaganda needs of the state planners, with absolutely no regard for truth or scholarship or tradition.”

Is this happening today? Is the SSAT just one of many means of prostitution and propaganda? Are the SAT and ACT similar? Who is guarding the minds and hearts of our children?

I ask myself whether it’s worth fighting. The machine is so big. I’m just one mom. But I’ve decided to adopt this statement from Secretary Benson’s same speech. “We must be neither fatalists nor pessimists. We must be realists, of high character and deep spirituality”. If enough of us can see this, we can stop it.