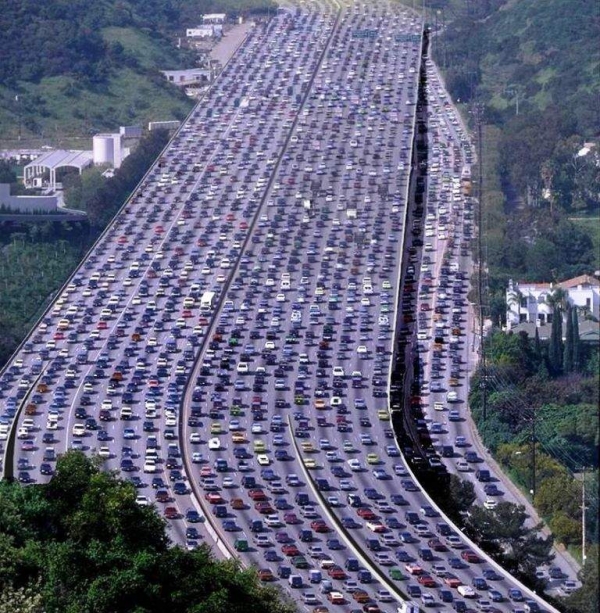 Ah, Oregon, crucible of socialism and training ground for Trotskyites. If it seems like every utopian progressive policy comes from my fair state, well, where there's smoke there's fire. The latest is a new revenue source - taxing the mileage you drive instead of the fuel you consume.

The latest scheme is the state's attempt to backfill tax revenues that have cratered due to our horrible economic climate. Oh, state officials will tell you it's because we're such successful progressives that we need to invent new revenue streams. But really, we need more money in this state because the utopians have destroyed our economy and all the revenue streams with it.

Here's what's happening. Gas tax revenue is falling precipitously, causing a crisis in transportation budgets. The reason most often cited for this crisis is that cars are more efficient, and fewer people are driving than they used to, presumably opting for public transit. So we need a new revenue source to make up for the loss of revenue caused by all those good little environmentalists.

Civil libertarians are correct to ... shall we say ... look askance at this scheme. The invasions of privacy involved in potentially transitioning this from a voluntary to a mandatory system are enough to evoke the image of Big Brother in even the most ardent leftist (whether they consider that a frightening image, or a welcomed one).

Be that as it may, the underlying premise sounds plausible, until one considers that Oregon has consistently had an unemployment rate well above the national average, while the labor force participation rate has fallen off a cliff.  Could the lack of gas tax revenues have anything to do with the notion that fewer people are driving to work? Could it be that job creators have fled and taken jobs with them? Could it possibly be that the old saw is true, that we don't need more taxes, we need more taxpayers?

We lived in Oregon for 3 years. In the end, I voted with my feet.

Stop the TSA’s Assault on Freedom

The backlash over the Transportation Security Administration’s (TSA) new invasive procedures has transcended left vs. right politics. Under the banner of security, American citizens are being subjected to virtual strip searches or intrusive full contact pat downs from armed government bureaucrats. These policies do more to humiliate us and pad the pockets of lobbyists than actually keep us safe.

Government Run High-Speed Rails Will Likely Be a Disaster

FreedomWorks  has been closely watching the REAL ID battle in Oklahoma and other states like South Carolina.  Representative Dr. Mike Ritze has three bills ready to go that will help protect the privacy of Oklahoma citizens.  The bills protect sensitive personal information on Oklahoma citizens, stop REAL ID and enhanced driver's license implementation.

It’s clear to anyone who believes in the free market and limited government that California is poised on a knife-edge: state legislators can do the right thing, tighten belts and declare California open for business or they can continue to tax citizens and their businesses straight out of the state.No one would deny that times are tough.  But when you can’t make ends meet, most people start making tough decisions and stop spending.  California is facing a $42 billion budget gap and some state legislators think that taxpayers should pay for the years of overspending and waste that put them there.  Currently there is a plan that calls for $14 billion in tax hikes – everything from an income tax surcharge to higher sales tax to a hike in the gas tax.  And the list grows from there. The plan also calls for $10 billion in borrowing. When you are in a hole, the first thing you should do is stop spending!People who are already hurting shouldn’t have to pay more in taxes.  The years of high taxes and complex regulations are what has driven businesses and families from California in the first place.  Rolling back those regulations and cutting taxes and spending could mean real, long term growth for the state.Luckily there are a few brave leaders in the Senate who have been willing to say enough is enough.  Senator Dennis Hollingsworth (R-36th) has led the charge and stood up for California taxpayers and businesses against this plan.But he needs your help.Please take a few minutes of your time to call these Senators and remind them that if they truly believe in fiscal responsibility they must oppose this budget and its massive tax hikes and borrowing.  These two Senators need to hear from you that they should not vote to raise taxes: Senator Dave Cox (R-1st)        (916) 651-4001 Senator Abel Maldonado (R-15th)    (916) 651-4051These two Senators have publicly stated that they are in favor of this boondoggle of a budget and they need to hear from you: Senator Dave Cogdill    (R-14th)    (916) 651-4014 Senator Roy Ashburn    (R-18th)    (916) 651-4018I don’t need to tell you that time is of the essence.  Please call right away.  Then forward this email to five friends and help get the word out.  We like to say that government goes to those who show up.  It is gravely important that in this fight for the future of the state of California people who believe in lower taxes, less government, and more freedom are the ones who show up.

Peter Swire of the Center for American Progress is urging Congress to enact technical measures that enable users to opt out of online cookies—typically invisible and unobtrusive digital trackers which send information about a user's behavior back to their hosts. This isn't a new thing for Swire; previously, he's complained that current technologies used to block tracking cookies are too difficult. But what's worth noting here is the Center for American Progress's own policy on cookies: