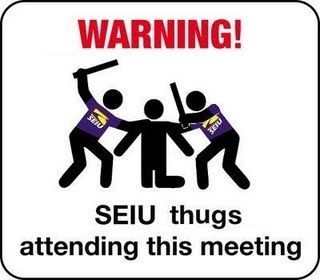 Earlier this year, a ballot initiative was filed in Oregon to place a measure on the 2014 ballot to allow public sector union members to opt out of mandatory deduction of dues from their paychecks. After months of legal wrangling, this week the Oregon Supreme Court - every member of which has been appointed by a Democrat Governor - affirmed SEIU's stance and changed the ballot title to their liking.

Despite the initial approval of the office of the very liberal Attorney General, the unions immediately filed suit to have the ballot title changed. Recognizing what a threat to their revenue this would be - even though it's not even a full right to work measure - the unions fought tooth and nail to get a title that would twist the measure's meaning. In Oregon, the title of the ballot measure is vital to its success. As a vote by mail only state, most voting decisions are based on information included in the statements in the voter's pamphlet that accompanies a ballot.

But SEIU and other public sector unions filed suit to change this language, and the Oregon Supreme Court has sided with them. The official ballot title will now read, "Allows non-union member public employees receiving required union representation to refuse to share representation costs."

According to the no-longer-daily Oregonian newspaper,

[Ballot author] Odell said the ballot title – which is often the main thing that voters key on when they are studying a ballot measure – will "require a lot more work on my part to educate voters on what the measure does."

Odell had argued that the ballot title should instead have stressed that workers would no longer have to make compulsory payments to unions, something she said is a basic matter of fairness.

The unions and their allies saw it differently.

This ballot measure "will help voters understand the basic unfairness of the measure," said Scott Moore, spokesman for Keep Oregon Working, a new group formed by unions and other groups to oppose the initiative.

Under the measure, Moore argued, "unions would have to pay the representation costs of people choosing not to join a union."

As we've seen in other states, the public sector unions know that the voters think they have too much power. Luckily for them, Oregon is so SEIU friendly that they have little to fear from a judiciary that has been exclusively appointed by the unions' political protectors.

We'll see in 2014 if the voters recognize the inherent conflict of interest represented by public sector unions. As of right now, it just became a lot more difficult to educate the voters in the Beaver State.

Our Michigan Representative has already invited Boeing to Michigan. We will be happy to have them. What will your Unions do for you when there are no more jobs? Those who do not learn from history are doomed to repeat it.

And this is the result of liberal appointments to the courts of our land. The law has nothing to do with it. It is all about an ideology that has failed miserably and will continue to fail until people wake up and realize our country is being destroyed by a group of communists wienies who are brave enough to bully the American people, but have their tails between their legs any time some other country presents an issue of aggression.

In recent years, the topic of unionization and right-to-work laws has been raised as a fairly contentious issue. As state legislatures sought to recoup the costs incurred due to lost revenue following the Great Recession, de-unionization policies, at least at the public sector level, were floated as cost-cutting measures. But nearly as often, right-to-work laws at the private sector level were also explored and implemented, perhaps most infamously in the case of the state of Wisconsin under Governor Scott Walker.