Our very own Wesley Mouch

In Atlas Shrugged, one of the main villains is Wesley Mouch, who is described in the Wikipedia entry on the book’s characters as “Initially Wesley Mouch is the least powerful and least significant of the Looters - the other members of this group feel they can look down upon him with impunity. Eventually he becomes the most powerful Looter, and the country’s economic dictator, thereby illustrating Rand’s belief that a government-run economy places too much power in the hands of incompetent bureaucrats who would never have positions of similar influence in a private sector business.”

And now we have our very own Wesley Mouch: 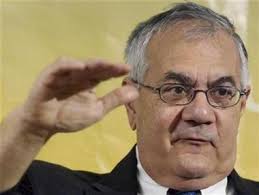 Barney Frank is a petty bureaucrat-cum-dictator of the worst sort, whose Congressional snivelings simply reinforce the view of all sane Americans that no politician from Boston is to be trusted (whether they’re drunk or not.) Doesn’t he even look like he could/should be named “Wesley Mouch"?

In another pathetic performance on Wednesday, Barney Frank was grilling AIG CEO Edward Liddy, demanding the names of employees who received retention bonuses which the company agreed to before Mr. Liddy became CEO. Liddy said he would provide the names if Mr. Frank would agree to keep them confidential because AIG employees have been receiving death threats. Mr. Frank said he was not persuaded that the threats were significant, that he would not guarantee confidentiality (meaning he wants to use a current or former AIG employee to score political points), and that he would subpoena the names if he has to.

If there is anyone whom this country should be repudiating, it is Barney “Mouch” Frank.

In another fine moment, Mr. Frank demanded to know the names of people who received their bonuses after they no longer worked at AIG. This happened after Mr. Liddy repeatedly explained that the retention bonuses were given to people who were assigned to close down certain parts of AIG’s business. Mr. Frank demanded to be provided with a list of former employees who received such bonuses and how long they stayed at AIG before leaving and then getting the bonus. The implication of course is that Mr. Frank thinks someone who wasn’t at AIG for long shouldn’t be getting a bonus. But of course if the goal of the employee is to wind down an area of business quickly, one could just as easily argue that the people who left the fastest might have the best argument for a bonus. Now, I’m not exactly arguing that, but just making the point that Frank is a perfect example of a man who knows enough to be dangerous but not enough to be useful – and that suits his political ambitions just fine.

While Mr. Frank continues his anti-capitalist ranting on the House side, soon to be ex-Senator Chris Dodd (D-CT) was crying crocodile tears about the AIG bonuses, seemingly forgetting that it was his amendment to Obama’s “stimulus” bill which explicitly protected bonuses such as AIG’s, specifically that there would be an “exception [from the stimulus’ bill’s executive compensation restrictions] for contractually obligated bonuses agreed on before Feb. 11, 2009″. Mr. Dodd says the language of his amendment was changed in conference or elsewhere and that he didn’t actually propose that, yet somehow it became law as part of his amendment. On Thursday morning, Dodd was pointing the finger at the Obama Administration for the language change.

It should come as no surprise, that just as Chris Dodd and Barack Obama were the biggest Senate recipients of “bonuses” (aka campaign contributions) from Fannie Mae, they were also the two biggest recipients from AIG, who gave more than three times as much to Democrats as to Republicans in 2008.

And then, there’s the Democrats’ version of “The Architect” (the nickname for Karl Rove), Treasury Secretary Tim Geithner, the man by most accounts primarily responsible for the bailout of AIG and largely responsible, along with Hank Paulson and Ben Bernanke for the entire bailout craze. Earlier this week, Geither offered feigned outrage at the AIG bonuses, sending a letter to Congressional leaders saying that the government will get the money back from the company. While it’s possible that Geither wasn’t made aware of the bonus payments, the fact that the Treasury Department was told by the New York Federal Reserve about the bonuses more than two weeks before the money was paid means one of two things: Either Geither knew about them and let Congress believe he didn’t, or his Department is so disfunctional under his “leadership” that they left him swinging in the wind. In either case, adding in Geithner’s central role in bailing out AIG, in crafting the “stimulus", and in his utter failure to competently run the financial and economic arm of the executive department during the most critical time for our economy since before my parents were born, it is a travesty that he still has his job.

I guarantee we’ll start hearing more and louder calls for Geithner’s resignation, not least from Democrats in Congress who would like to find a Democrat in another building to deflect blame on to. (Chris Dodd will probably lead the charge, as he’s already started the blame game.) My prediction: Barack Obama will offer his “full confidence” in Geithner, and then “reluctantly” accept his resignation. It would be particularly ironic if Geithner’s last day was April 15th, tax day, so that he could go off and file another false tax return…apparently a prerequisite toward getting an Obama cabinet position but hopefully not a strong enough qualification to keep him there.

FreedomWorks Vice President of Legislative Affairs Jason Pye made the following statement about the capitulation to Democrats by Sen. Lamar Alexander (R-Tenn.):

FreedomWorks today blasted the Obama administration for its plan to bail out health insurance plans that have lost money participating in ObamaCare. The plan, which was described in the Washington Post Thursday, circumvents the congressional prohibition on taxpayer dollars being used for ObamaCare’s risk corridors program.

Following the release of the omnibus appropriations bill, which targets ObamaCare by prohibiting the use of taxpayer funds to bail out health insurance companies that participate on the exchanges, FreedomWorks Legislative Affairs Manager Josh Withrow commented: