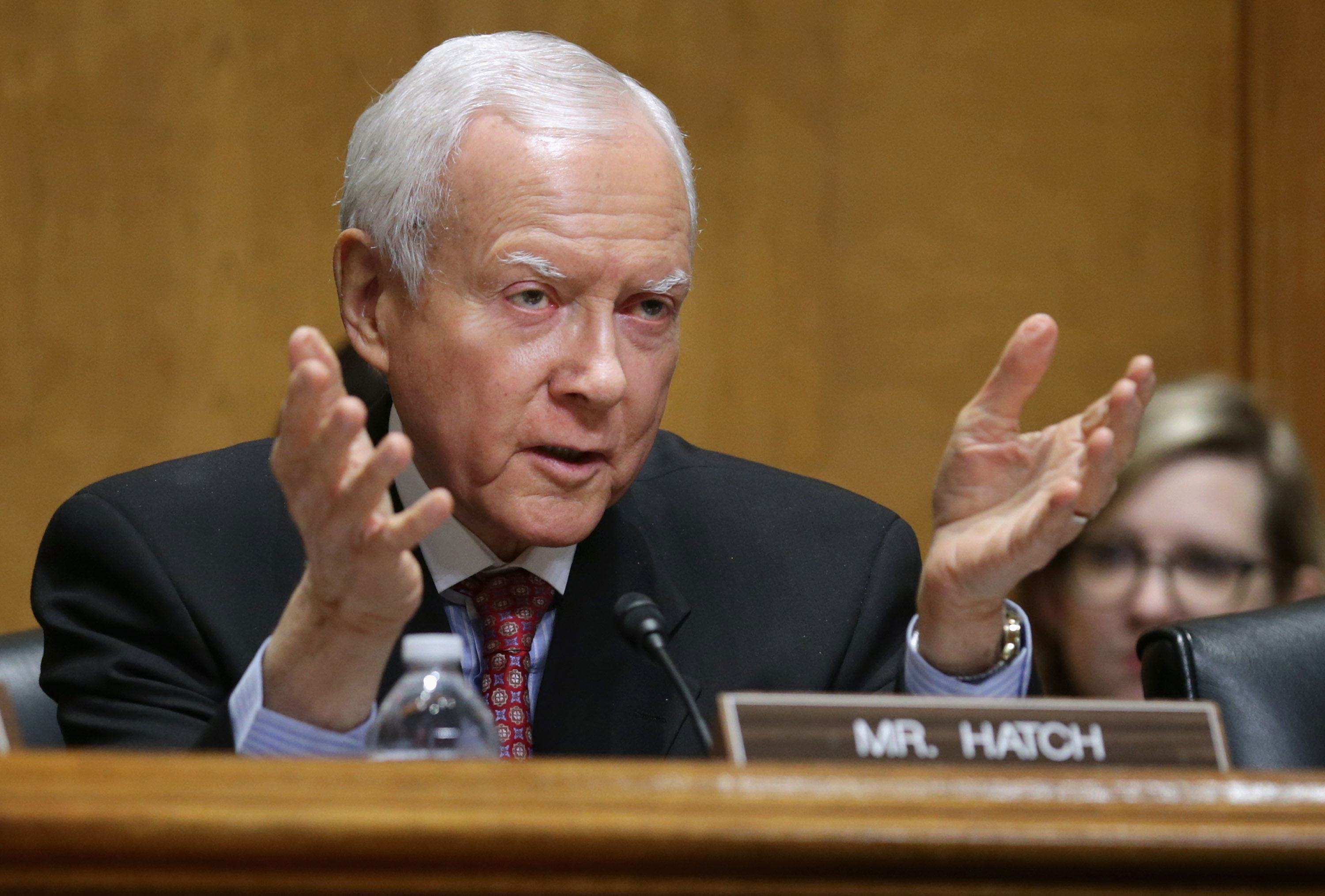 The House’s version of the Tax Cuts and Jobs Act underwent several changes to satisfy the concerns of members. Although it was originally slated for repeal, the child adoption tax credit, for example, has now been preserved. Additionally, changes were made to the small business provisions of the bill that won the support of the National Federation of Independent Business (NFIB), which had harshly criticized the original text.

Currently, the House is expected to consider the Tax Cuts and Jobs Act the week of November 13.

By our estimate, there are five to ten members of the House Republican Conference who will vote against the bill. Most of these members represent districts in high-tax states. The preservation of the property tax deduction, capped at $10,000, has not won them over. Our estimate of votes against the bill is early, but we are continuing to track public statements to ensure that our internal target list is accurate.

The Senate Finance Committee, chaired by Sen. Orrin Hatch (R-Utah), unveiled details of his version of the Tax Cuts and Jobs Act on Thursday, November 9. Chairman Hatch plans to begin work on the bill on Monday, November 13. A vote in the Senate could come as soon as the week after Thanksgiving.

The Senate’s version of the Tax Cuts and Jobs Act differs substantially from the House version in a several different ways.

Additionally, something worth pointing out here is that the FY 2018 budget resolution, H.Con.Res. 71, passed by Congress allows a $1.5 trillion deficit over ten years, without macroeconomic feedback, to produce a tax bill under reconciliation. The revenue effects under the Senate’s version of the Tax Cuts and Jobs Act creates a deficit of $1.495 trillion, leaving virtually no room for major changes without adjustments in other areas. 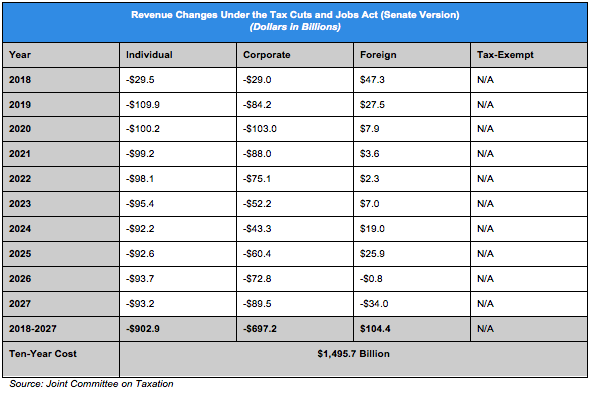 Although legislative text has not been released, the Joint Committee on Taxation has published a complete description of the Senate version of the Tax Cuts and Jobs Act, which has details on every provision of the bill.

The Senate’s version of the Tax Reform and Jobs Act departs from the House’s version on tax rates. The House proposed consolidating the existing seven-rate structure into four rates: 12 percent, 25 percent, 35 percent, and 39.6 percent. The Senate keeps a seven-rate structure in place, but cuts some tax rates compared to current law and adjusts the income levels to which those rates apply for all rates. 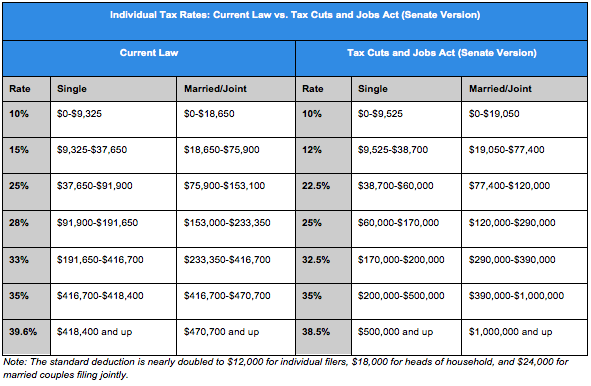 Tax rates and the standard deduction are tied to chained CPI (C-CPI-U) beginning in tax year 2019. The “bubble tax” that found its way into the House’s version of the Tax Cuts and Jobs Act does not appear in the Senate’s version. The individual alternative minimum tax is repealed.

Similar to the House version of the bill, the Senate’s version would eliminate or repeal most existing tax credits and deductions, simplifying the tax code. The deductions for medical expenses and graduate students are preserved. The enhanced standard deduction for the blind and elderly is also maintained.

The House version proposed capping the mortgage interest deduction at $500,000 in principle value. The Senate version would maintain the existing $1,000,000 cap.

Another key, and disappointing, difference between the House and Senate versions of the Tax Cuts and Jobs Act is the changes to the estate tax, commonly known as the “death tax.” The House version of the bill proposed a doubling of the exemption, to $10 million from $5 million, beginning in tax year 2018 and repeal beginning in tax year 2024.

Unfortunately, some Senate Republicans, including Susan Collins of Maine and Mike Rounds of South Dakota, have drawn a line in the sand on the estate tax. Thus, the Senate version will not propose a repeal of the estate tax. It would only double the exemption to $10 million beginning in tax year 2018.

Like the House version, the Senate version would increase the child tax credit. The Senate actually raises the credit slightly higher than the House, to $1,650 per child from $1,000. The House proposed raising the credit to $1,600. The first $1,000 of the credit would be refundable. An additional $500 nonrefundable credit for nonchild dependents would be provided. The credit is indexed to inflation. The phase-out, which is not indexed to inflation, is increased to $1,000,000 for married couples and $500,000 for other tax filers.

The House version of the Tax Cuts and Jobs Act proposed reducing the top effective rate for pass-through businesses at 25 percent. But the proposed anti-abuse rules were a source of criticism.

Under the House version, a qualifying pass-through business could claim only 30 percent of income as business income, allowing it to fall under the 25 percent rate. The House Ways and Means Committee added a lower, 9 percent, rate for pass-throughs during markup. The remaining 70 percent would be treated as ordinary income, subjecting it to the regular individual tax structure. Tax filers who claimed a higher percentage as pass-through business income could “prove-out” the higher figure.

The Wall Street Journal has already editorialized in favor of this departure from the House version: “The little guys thus do at least as well as corporations, which are taxed twice, on both income and dividends. The Senate’s approach is simpler, and businesses with income below the top tax rate can write off more income.”

Separately, like the House version, the Senate version provides for five years of the full and immediate expensing of capital investments. The Section 179 expensing is increased to a maximum of $1 million from $500,000. The income phase-out threshold is increased to $2.5 million from $2 million. Interest deductibility is capped at 30 percent of earnings before interest and taxes (EBIT).

An Option to Provide More Room to Fix Some Concerns

The individual mandate – sometimes known as the “shared responsibility payment” – is a penalty assessed against Americans who do not purchase health insurance coverage. The penalty for tax year 2017 was 2.5 percent of household income or $695 per person, whichever is higher.

Including the repeal of the individual mandate would reduce the federal budget deficit by $338 billion between FY 2019 and FY 2027. Repealing this provision of the Affordable Care Act, generally known as “ObamaCare,” would provide tax-writers with substantially more money to address the deficiencies of the the House and Senate tax bills.

But adding the repeal of the individual mandate in the bill may also pose a significant risk. Although it does bring an additional $338 billion for tax-writers to be bolder, it would also increase the number of uninsured Americans by 13 million in 2027.

The reason for the increase in the uninsured is because the Congressional Budget Office (CBO) believes that fewer people would purchase health insurance coverage absent coercion through a tax penalty. The CBO has routinely overestimated the coercive power of the mandate, as coverage projections have consistently been revised from a projected 26 million insured through ObamaCare exchanges in February 2013 to 10 million in January 2017.

Still, the calculus of including such a provision in the Tax Cuts and Jobs Act makes tax-writers nervous because of the failure of the Senate in producing enough votes to pass any health insurance reform bill earlier in the year. The concern is that the inclusion of the mandate repeal would add another reason for some moderates in the Senate to vote against the tax bill.

It is is likely that an amendment will be filed in the Senate for consideration on the floor to repeal the individual mandate.

What You Should Know Going Forward

As mentioned at the beginning of the post, the Senate Finance Committee will begin work on the bill on Monday, November 13 and a vote in the Senate could come as soon as the week after Thanksgiving. Because the Tax Cuts and Jobs Act is being considered under the rules of budget reconciliation, there will be a “vote-a-rama” in the Senate.

After a procedural motion to proceed to the bill, which will be subject to a roll call vote in which 51 votes are required to move forward, the Senate begins an initial 20-hour debate. This is followed by votes on amendments to the bill, during which, theoretically, an unlimited number of amendments can be offered.

Many amendments offered by Democrats will have a messaging theme. It is likely that these amendments will target corporations and higher income earners. Some amendments, such as further expanding the child tax credit, are likely to attract bipartisan support but also risk exceeding the $1.5 trillion deficit allowed for the bill by H.Con.Res. 71.