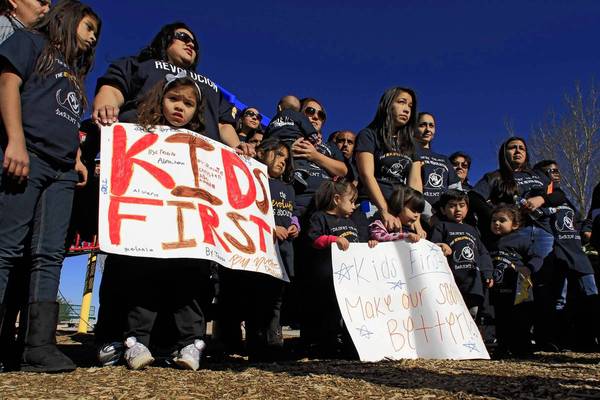 When children are trapped in failing California schools, parents are empowered to execute the “parent trigger” option. Parent trigger has been in effect in California since 2010 and allows parents to turn an existing failing school into a charter school, replace employees, or close the school entirely. In Adelanto, California, parents chose to go this route and turn a local elementary into a charter school, and it turned into quite the debacle. Once the parent trigger was invoked, the school district defied the law. Now, finally, a charter school has been chosen to help these kids get on the path to a better education. I thought that the twists and turns of this crazy story were in the past, but alas, I was wrong.

In June of 2013, days before the Desert Trails Elementary School (now Desert Trails Preparatory Academy) was set to be turned over to a charter, the school was vandalized. Mustard, ketchup, and paint were thrown about a classroom, leaving behind $8,000 in damages to the windows, walls, and rugs. In December, the culprits were charged. Who were the culprits? Why, a couple of moms with children at the school, of course. Chrissy Guzman (35) and Lori Marie Yuan (40) were both vocal opponents of the parent trigger being used, fighting to stay with to the (failing) status quo.

Guzman and Yuan were arraigned in January and plead not guilty. They’re due back in court on March 10th. Things are especially complicated for Yuan, who currently chairs the Planning Commission in Adelanto. If found guilty, she will lose her city post. According to the Victorville Daily Press “Adelanto Mayor Pro Tem Steve Baisden, who appointed Yuan to the city post, said Wednesday he is requesting that an item be placed on the City Council’s Feb. 26 agenda to discuss removing Yuan from the commission. Baisden said his final decision hinges on the outcome of the vandalism case.”

I’m all for people being passionate about the education of their children, but this is just bizarre. After all, education doesn’t just happen in the school. What are these women teaching their children about real life?

When Commies lose, they lose it bad...

When a school is failing, it seems reasonable that parents can effect change in that school. In California, the Parent Trigger law enables parents to overhaul a school if it is failing their children.

Principal Ousted by Parents in California

Across America, Parent Trigger laws are being invoked to make changes in failing schools. In some cases, schools are transformed from traditional public schools and, in others, they are used to replace administration officials impeding the success of students.

Monopolies don't work, and one of the best things about school choice is that it forces educators and schools to compete against each other for students. This makes everyone step up their game, and the students are the ones to benefit. Some have questioned if public schools would be willing to compete in a free market setting but, in the wake of a parent trigger being invoked in Los Angeles, the local district is doing just that.

When children are trapped in failing schools, parents sometimes feel as though they are powerless to improve the situation. Fortunately, education reform is gaining momentum around the country, and parents have become more educated, organized, and empowered to make the best decisions for their children's education. One of the most dramatic examples of parent empowerment is the Parent Trigger, which allows parents to turn an existing failing school into a charter school, replace employees, or close the school entirely.

Today, President of National School Choice Week, Andrew Campanella joins me to discuss events happening around the nation to bring attention to the need for educational options and how you can get involved.

After successfully executing the parent trigger option at Desert Trails Elementary school in Adelanto, California, and the protracted legal battle which followed, parents have selected a charter school to take over the failing public school.

Progress for School Choice in Pennsylania