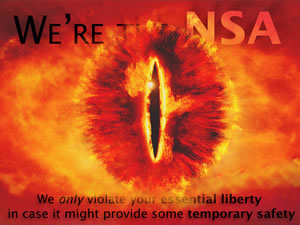 Set to expire at the end of May, Section 215 of the USA PATRIOT Act is only one of a number of authorities the government uses to defy the 4th Amendment and spy on millions of Americans without a direct warrant. Nevertheless, its upcoming sunset date provides defenders of liberty a strong chance to make serious move back towards our founders’ intention that:

“The right of the people to be secure in their persons, houses, papers, and effects, against unreasonable searches and seizures, shall not be violated, and no warrants shall issue, but upon probable cause, supported by oath or affirmation, and particularly describing the place to be searched, and the persons or things to be seized.”

Unfortunately, government is ever loathe to give up any power once used. Both Republican leadership and the Obama administration appear to agree that unlimited authority to spy on U.S. citizens without probable cause is worth defending vigorously.

House Republicans are at least acknowledging the need for reforms to Section 215 by releasing a new bill shortly that promises to be an update to the USA FREEDOM Act that passed last year. However, last year’s bill was gutted at the last second, leading privacy advocates (including FreedomWorks) and even many of the bill’s main sponsors to withdraw their support. We strongly hope that the renewed USA FREEDOM Act contains much stronger privacy defenses than last year.

Whether or not the House bill contains adequate protections against warrantless spying when it is introduced (likely next week), there will be a crucial opportunity to make it even stronger. It is likely that members of the Judiciary committee will offer amendments which would greatly strengthen the bill and would perhaps even attempt to rein in other laws that the government uses to justify mass surveillance of its citizens.

Stay tuned – defenders of the Constitution in the House Judiciary Committee may need your voice to be heard when this new bill comes up for approval – perhaps this Thursday.

UPDATE The House Judiciary Committee is marking up the USA Freedom Act this Thursday, April 30. Representatives Ted Poe and Zoe Lofgren have introduced an amendment to stop the bulk collection of electronic records (emails, web browser histories, etc) under Section 702 of the FISA Amendments Act. This amendment would be a truly significant surveillance reform, and you can call members of the Judiciary Committee HERE to tell them to support the Poe/Lofgren amendment.

In the Senate, Majority Leader Mitch McConnell (R-KY) has bypassed normal Senate procedure in order to fast-track a bill that does not even pretend to reform NSA surveillance. In fact, the new bill, S. 1035, would merely reauthorize Section 215 for 5 years.

McConnell needs to hear from his fellow Republican senators that his new long-term reauthorization of Section 215 is an affront to constitutional rule of law and basic civil liberties. You can call key senators and tell them to oppose McConnell's bill below:

President Bush created the Patriot act by his order on October 26, 2001, and increased funding to the NSA.
http://www.history.com/this-day-in-history/george-w-bush-signs-the-patri...

Since the link showed contact information for only two Senators, neither of whom is mine, I used Popvox to comment on this bill.

It's just the beginning

FreedomWorks has joined the Sunlight Foundation and Demand Progress in publishing a coalition letter in support of the Massie amendment to stop warrantless spying on American citizens. The letter is signed by 26 organizations from across the political spectrum.