Pete Buttigieg Has a Deal for Seniors - Republicans Should Pay Attention 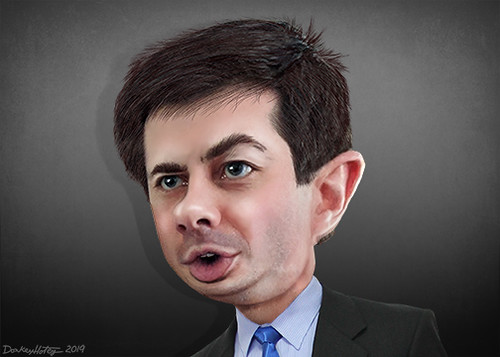 When the retirement issue first surfaced in the presidential race, the most ambitious plan wasn't from a Democratic Elder like Joe Biden, Elizabeth Warren or Bernie Sanders.

Pete Buttigieg -- the 37 year old mayor of South Bend, Indiana -- proposed what he dubbed the “Gray New Deal” to tackle America’s real retirement readiness gap. His plan would add another layer to our already insolvent Social Security system by increasings benefits to 125 percent of the federal poverty limit for anyone who worked at least 30 years. For current workers, he’d create a “Public Option 401(k).” Workers who chip in 1.5 percent of their pay would trigger an employer contribution of 3 percent. Mayor Pete also calls for a new $90 per day benefit for long term care with no time limits.

The magic financing for this retirement goody bag would be a range of additional, unspecified taxes. These include automatic hikes in payroll taxes on upper-income earners above $250,000 in order to keep the program financially solvent.

Mayor Pete has learned from Elizabeth Warren that having too much transparency on projected costs can spell trouble for a candidate. Her claims to give current and future Social Security recipients an extra $200 a month financed with an additional 14.8 percent in higher payroll taxes, as well as an additional 14.8 percent investment income tax on upper earners, was loudly ridiculed as unrealistic.

But critics of liberal retirement plans have to do more than savage their sloppy math. A future retirement crisis is real because the costs of our longer life stage has escalated dramatically. A World Economic Forum report finds America’s retirement savings gap could be the world’s largest at $137 trillion in 2050.

Vanguard, the wealth management firm, reports that the median 401(k) balance for those 65 and over is just $58,035. Over 50 percent of individuals aged 55 to 64 have retirement savings equal to only one year’s income - far below what is needed to maintain a middle-class standard of living.

President Trump and Congressional Republicans would be wise to wake up to the potency of the retirement issue. The 2016 election was the first time in decades that voters over 65 exceeded younger voters between 18 and 34.

Baby Boomers are increasingly being called on to care for aging parents. Many 65 years olds today will also require expensive long-term-care down the road whether at home or in a community facility. The national annual median cost of home care alone is $51,500 according to Genworth Financial.

President Trump has rightly touted the impressive growth of 401(k)’s during his term. Unfortunately, a large portion of the country does not own a retirement savings fund. Never has greater emphasis on financial literacy been more essential for people to better understand savings and investment.

The time is ripe to enlist the financial community to put forward a comprehensive educational effort highlighting retirement readiness as a national problem. While Elizabeth Warren constantly berates Wall Street, no industry better understands the challenges faced by retirees. The government should work with retired professionals to educate our public on the scope of the problem and share basic investment strategies. It would certainly accomplish more for communities than Warren’s Accountability Capitalism plan.

There are several steps that legislators could take to begin addressing these issues:

1) We need to get the SECURE Act to President Trump’s desk. This measure has 29 provisions aimed at increasing the use of tax-free private retirement accounts. It’s the first substantial overhaul of 401(k)’s since the 1980s. The SECURE Act would allow small businesses to set up lower cost and easily administered retirement plans Many part-time workers would be finally eligible to have their own plan. Sponsors of retirement plans could include annuities as an option by reducing their liability exposure. The legislation passed the Democratic House in May but is languishing in the Republican Senate as members quibble about extraneous issues.

2) Economists Jeff Yass and Stephen Moore recently revived the concept of “Own America Accounts” which enable individuals to direct a small slice of their Social Security contribution into stocks or bonds. We should not give up the fight on this common sense idea for the sake of younger generations who deserve a chance at building wealth.

3) We can also consider Senator Pat Toomey’s draft bill to allow retirement savers to tap up to $2,000 in 401(k)s and IRAs to purchase long term care insurance. The goal is to make insurance premiums more available and affordable.

4) Corporate America has been increasing the hiring of seniors for unfilled positions -- This trend should be applauded and encouraged by all Americans to continue.

Most important is to do everything possible to encourage and maintain economic growth. Nothing works better than this to sustain savings, income, and job creation for future retirees facing gaps in their nest eggs.

There are solutions to our yawning retirement gap based on principles of personal responsibility, promoting the growth of retirement vehicles and encouraging employers to interact with their employees on the issue.

Pete Buttigieg and Elizabeth Warren have signaled just how much the left is going to use retirement insecurity as a campaign wedge issue in 2020. It is important that supporters of economic growth have their responses ready and offer voters an alternative.

It was only a matter of time before the climate change guilt police turned its gaze on our senior community. Recently, The New York Times New Old Age delivered the verdict:

It is Best to Prepare for the Days of Necessity

A wise reminder from the old Aesop Fable and it appears Congress is indeed moving forward with pragmatic plans to help Americans improve their retirement savings prospects. Programs such as 401(k)s and IRAs were created to incentivize employees to save for the future but many folks find the products too complicated, intimidating or not available.

Last month, the Senate voted 56-41 to rescind the Department of Labor’s “Fiduciary Rule” using the Congressional Review Act. This was after a House vote of 234-183 to repeal the regulation. Under the Congressional Review Act, the House and the Senate reserve the right to jointly overrule unnecessary or burdensome acts of regulatory overreach. Today, as promised, President Obama has blocked Congress' efforts to deregulate. This is the 10th veto of the Obama presidency.

Following the U.S. Department of Labor’s promulgation today of a fiduciary rule that will make it more complicated for older Americans to get retirement investment advice, FreedomWorks Foundation Executive Director Curt Levey commented:

Taxpayer Ripoff: The Only Way to Define State Employee Benefits

Marta Mossburg reports in the Washington Examiner that even as Maryland faces a $700 million budget shortfall this year: