Physicians Survey: Take One Obamacare & Depress Me In The Morning

(Via Ben Domenech's The Transom.)

The Physician's Foundation conducted an extensive survey of those most essential to the delivery of health care in America and found that all is definitely not well in Doctor Land. (Link to the .pdf can be found here.)

Here are a couple of quick snapshots from the results.

First, the respondents were less than enthusiastic about where the implementation of Obamacare will take health care in the future.

Here are the above numbers broken down a little more.

This survey is quite long but each question has a corresponding chart that makes it easier to get through and is well worth the read. Some other notable findings include the ways physicians are proceeding in regards to Medicare and Medicaid. The majority (52%) have already or will soon limit Medicare patient access to their practices and 26% have closed their practices to Medicaid patients altogether.

As always, government regulation is seen as hindrance by those directly affected by it. When questioned about possible solutions to better access to health care and lower costs, a reduction in bureaucratic interference was the highest rated. 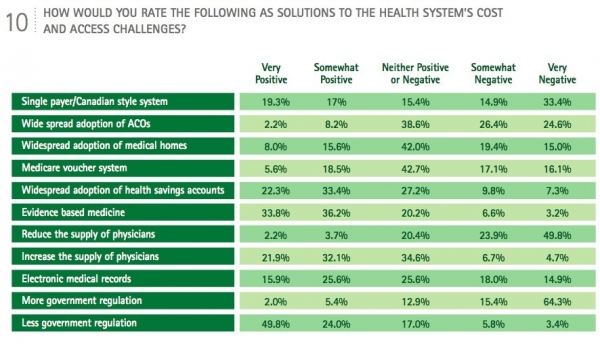 The bureaucrats may be happy with their efforts to "help" but the effects are so negative that 57.9% of the physicians surveyed wouldn't recommend the profession to anyone else and 77% are pessimistic about the future of it.

Again, access to health insurance and access to health care are very different things. If the people who are necessary to ensure the latter feel beaten down by the system the long term consequences of governmental efforts to increase the former will, in all probability, widen the gap between the two.