New 2009 Census data is set to reveal that 1 out of every 7 Americans live below the poverty line. It is estimated that 45 million people—or about 15 percent of the population—were poor last year. The 1.8 percentage-point increase in 2009 is the highest single-year increase since the government starting calculating poverty data.

Since the recession began in 2007, an increased number of Americans are dependent on government anti-poverty programs that have expanded its eligibility and benefits. However, the evidence is overwhelmingly clear that these anti-poverty programs have not reduced poverty. As Ronald Reagan said in his 1988 state of the union address:

My friends, some years ago, the Federal Government declared a war on poverty, and poverty won.

Since President Johnson’s War on Poverty program began in 1964, the federal government has spent about $10 trillion to “eliminate” poverty through government programs. Unfortunately, poverty levels have stagnated since the ineffective program began. The belief that we could simply eliminate poverty through government bureaucracies redistributing massive amounts of taxpayer dollars to the poor is foolish. As the chart from Cato Institute scholar Dan Mitchell shows, the poverty rate was falling until the War on Poverty began: 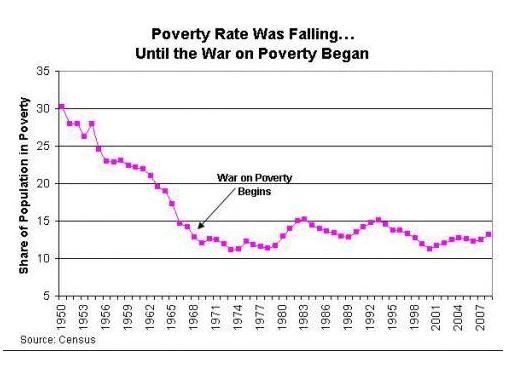 The facts suggest that it’s time to reconsider our tactics for reducing poverty in America. In order to truly help the poor, we cannot continue repeating the same failed programs hoping that they will eventually produce better results.

In the book Re-Privatising Welfare: after the Lost Century, Dr. Dennis O’Keeffe asks “would a free market mean more or less education, health-care and support for the needy?” He concludes that private charities have always had a better track record of helping the needy. Simply, the private sector will always outperform any service provided by the government. In a Cato Institute study, scholar Michael Tanner states “private charities are able to individualize their approach to the circumstances of poor people in ways that governments can never do.” Before government programs crowded out private charities, people voluntarily contributed massive amounts of money to the poor.

The welfare state is endlessly troubling since it fosters dependency and encourages poverty by paying people not to work. Furthermore, it reduces people’s incentives to voluntary help the poor. As Representative Ron Paul (R-TX) states in The Revolution: a Manifesto, “we have bought into the soul killing logic of the welfare state: somebody else is doing it for me.” The fewer federal government anti-poverty programs, the more people are inclined to  generously donate to charities and volunteer at organizations such as food banks. Unfortunately, by filling out tax forms some people feel that they have already fulfilled their duty towards their fellow men. Ron Paul states: “Do our responsibilities as human beings really extend no further than this?”

Americans are already the most financial generous people in the world. In 2009, Americans voluntary gave an estimated $307.65 billion to private charities. Imagine how much higher that amount would be if the government did not force taxpayers to contribute to inefficient and compulsory government “charities.” Absent of government bureaucracies, communities used to be the ones who cared for the needs of their people. Michael Tanner asks a thought provoking question: “If you had $10,000 available that you wanted to use to help the poor, would you give it to the government to help fund welfare or would you donate it to the private charity of your choice?” It seems that most everyone would choose the freedom to donate to a private charity based on their personal concerns.

It is worrisome that the poverty rate has increased at a record level last year. The federal government may expand its anti-poverty programs to meet increased demand. Like we’ve seen in the past, the expanded government programs will likely not help poor people escape poverty. If the goal was to truly help poor people, the federal government would step back and instead allow taxpayers to donate more of their hard-earned money to efficient private charities.

Paul Ryan (R-WI) and Robert Woodson, Founder and CEO of Center for Neighborhood Enterprise, have visited struggling communities throughout America recently and are promoting “A Better Way” program as a means to improve the lives of those mired in poverty.

1
06/26/2014
"The War On Poverty Has Failed. What Do We Do About It?"
"https:\/\/www.freedomworks.org\/content\/war-poverty-has-failed-what-do-we-do-about-it?social=facebook_share"
"This month, pundits from across the political spectrum are noting the 50th year of Lyndon Johnson's declaration of war on poverty. Liberals cite the good intentions of the programs, while Conservatives rue the trillions wasted on this failure and the massive growth of the federal bureaucracy it spawned (as I wrote about last year), but rarely do we do any self-examination. What do we do about it? "
https://fw-d7-freedomworks-org.s3.amazonaws.com/styles/thumbnail/s3/field/image/feel%20tank.jpg?itok=IqgQuxCY
Blog

0
04/11/2014
A Modest Proposal to Save Children from The War on Poverty
"https:\/\/www.freedomworks.org\/content\/modest-proposal-save-children-war-poverty?social=facebook_share"
null
https://fw-d7-freedomworks-org.s3.amazonaws.com/styles/thumbnail/s3/te_social_media_share/fw_default_0.jpg?itok=35IWEBMb
Blog

A Modest Proposal to Save Children from The War on Poverty

A Modest Proposal to Save Children from The War on PovertyThe War on Poverty is fifty years old.  Observing the semi-centennial, liberals and conservatives are arguing if the hundreds of programs and the trillions of dollars have actually reduced poverty.  Most of the statics and fallacies are merely continuing propaganda for incompetently formulated federal programs – conservative and liberal.  What is certain and ingloriously ignored is the millions of children being neglected and destroyed by The War on Poverty.

False Premises and The Root Failing of Collectivism

We all know that communism is evil, socialism is bad, big government reduces personal liberty and central planners can't plan their way out of a wet paper bag. But we don't often examine why.