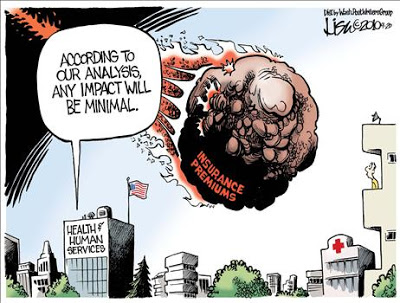 The premiums for lowest cost silver plans available on the federal ObamaCare exchange have jumped by 10 percent, according to an analysis conducted by Avalere Health, a consulting firm that generally advocates for the law.

Premiums for 2014 health plans on the individual market jumped substantially compared to pre-ObamaCare rates. This was due to several mandated benefits, taxes and fees as well as significant regulatory changes, such as the age-rating restriction, which prohibits insurers from charging older consumers more than three-times what younger policyholders pay.

Unsurprisingly, however, premiums are still on the rise, largely a result of too few low-risk consumers, higher utilization of coverage by older policyholders, and a lack of insurers participating on the federal exchange. The so-called "administrative fix" for some canceled health plans is also to blame.

The Centers for Medicare and Medicaid Services released premium data for health plans available on the federal exchange the day before the launch of the second open enrollment period. The New York Times reported that the consumers could face premium increases as high as 20 percent unless they switch plans.

Twenty-eight percent of consumers purchased the lowest cost silver plan during the first open enrollment period, making it the most popular on the federal exchange. On average, according to the analysis, these consumers will see premium increases of 10 percent if they don't login to HealthCare.gov and pick a new plan. If they don't, they'll be automatically re-enrolled for next year.

Another complication for consumers is the benchmark health plan on which subsidies are calculated -- the second-lowest cost silver plan -- is changing in most areas of the country, which could lead to them to see more of the true costs of their pricey ObamaCare coverage.

Premium increase of 10%, yea right, my wife's deductible went from $2,500 per year to $5,000. We just as well not have any health insurance. We certainly can't afford any regular care for less than catastrophic needs and then we'll have to either do payments or bankruptcy. Now isn't that hope and change we can count on?

In the latest news: you guys lost the Obamacare thing a long time ago. Time to move on to other things that please corporate backers. Come to think of it, seems to me its been awhile some I've seen one of those Net Neutrality stories. Better make up another story....

Well, we passed it and found out what's in it. NOTHING the lying piece of crap currently infesting the White House has been true. The entire mess has been a huge lie since Day One. In January, when the Republicans take over, one of their first duties should be to defund every part of this farce of a program that has been detrimental to Americans and their "formerly existing" health care plans. If the lying sack of crap in the White House doesn't like that, he can go to his favorite corner and pout some more. He's going to be doing a lot of pouting and throwing a lot of temper tantrums when all those bills that Reid stonewalled get sent through the Senate and dropped on his desk.