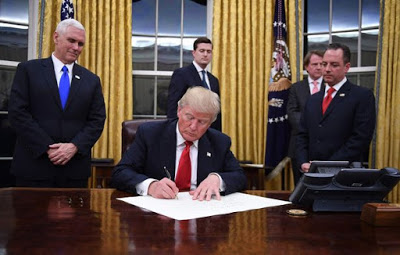 While the executive order isn't yet available on the new WhiteHouse.gov, the text is below:

By the authority vest in me as President by the Constitution and the laws of the United States of America, it is hereby ordered as follows:

Section 1. It is the policy of my Administration to seek the prompt real of the Patient Protection and Affordable Care Act (Public Law 111-148), as amended (the "Act"). In the meantime, pending such repeal, it is imperative for the executive branch to ensure that the law is being efficiently implemented, take all actions consistent with law to minimize the unwarranted economic and regulatory burdens of the Act, and prepare to afford the States more flexibility and control to create a more free and open healthcare market

Sec. 2. To the maximum extent permitted by law, the Secretary of Health and Human Services (Secretary) and the heads of all other executive departments and agencies (agencies) with authorities and responsibilities under the Act shall exercise all authority and discretion available to them to waive, defer, grant exemptions from, or delay the implementation of any provision or requirement of the Act that would impose a fiscal burden on any State or a cost, fee, tax, penalty or regulatory burden on individuals, families, healthcare providers, health insurers, patients, recipients of healthcare services, purchasers of health insurance, or makers of medical devices, products, or medications.

Sec. 3. To the maximum extent permitted by law, the Secretary and the heads of all other executive departments and agencies with authorities and responsibilities under the Act, shall exercise all authority and discretion available to them to provide greater flexibility to States and cooperate with them in implementing healthcare programs.

Sec. 4. To the maximum extent permitted by law, the head of each department or agency with responsibilities relating to healthcare or health insurance shall encourage the development of a free and open market in interstate commerce for the offering of healthcare services and health insurance, with the goal of achieving and preserving maximum options for patients and consumers.

Sec. 5. To the extent that carrying out the directives in this order would require revision of regulations issued through notice-and-comment rulemaking, the heads of agencies shall comply with the Administrative Procedure Act and other applicable statutes in considering or promulgating such regulatory revisions.

Sec. 6. (a) Nothing in this order shall be construed to impair or otherwise affect:

(i) the authority granted by law to an executive department or agency, or the head thereof; or

(ii) the functions of the Director of the Office of Management and Budget relating to budgetary, administrative, or legislative proposals.

(b) This order shall be implemented consistent with applicable law and subject to the availability of appropriations.

(c) This order is not intended to, and does not, create any right or benefit, substantive or procedural, enforceable at law or in equity by any party against the United States, its departments, agencies, or entities, its officers, employees, or agents, or any other person.

Basically, the executive order gives HHS, the Centers for Medicare and Medicaid Services (CMS), and any other federal agency tasked with implementation or oversight of ObamaCare to grant waivers from aspects of the law that are causing the greatest negative impact on consumers and states' individual health insurance markets. This means that the individual mandate, which, in 2016, impacted around 8 million people and cost more than $3 billion in penalties, is presumably gutted.

It's worth noting, however, that the penalty for non-compliance with the individual mandate is defined by statute in Section 1501 of Public Law 111-148. Still, HHS was given wide latitude to grant waivers where it saw fit during the Obama administration, so the precedent is there. The executive order could also be intended to apply to the so-called "essential health benefits" promulgated by CMS and HHS. If that's the case, these mandatory benefits, which, in part, define what is a "qualified health plan" (QHP) under ObamaCare, could be waived. That would lead to reductions in health insurance premiums.

Why didn't President Trump instruct HHS and CMS to roll back the regulations? Well, the short answer is that it's not that easy. A regulatory agency has to go through a lengthy process, which includes public notice and the collection of public comments, before it can finalize a proposed rule. It can take several months to a year, sometimes longer, to complete the process.

All in all, President Trump's order does provide some immediate relief. But it's not a cureall. Congress has to act, and quickly, to repeal ObamaCare and replace it with a patient-centered alternative that reduces regulation, promotes portability, expands health savings accounts, establishes state-based high-risk pools, and block grants Medicaid to the states.