The Presidential Field For 2016 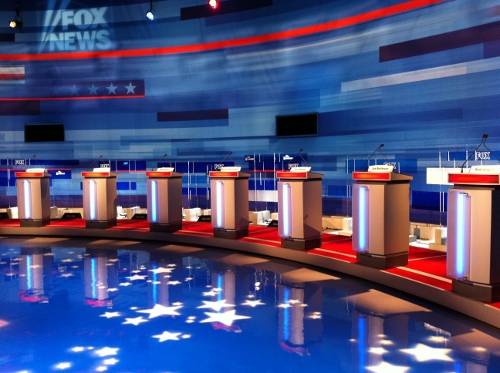 While we rightly focus on the 2014 primaries and upcoming midterm elections, let's take a break and look in on the field for the 2016 presidential race.

The length of the presidential election cycle is now longer than two years, unfortunately. That means that to get the best candidates, we have to anticipate where things are going to be next year, after the mid-terms. Prospective candidates who work hard for others in 2014 may help themselves in 2016.

On the Democrat side, Hillary Clinton is the presumptive nominee, should she decide to run, but she will be forced to run as a continuation of the Obama administration. That might prove difficult in a number of ways, but Clinton has no choice: she hasn't distanced herself from Obama at all before the campaign, and will be unable to do so if she runs. She has to run as Obama II -- if she runs at all.

The Establishment Is Already Claiming It's Over

In 2012, the steady drumbeat of Mitt Romney's "inevitability" turned off voters, depressed turnout in Republican primaries, and caused donors to avoid other candidates. Some "powerful insiders" may be trying to draft Jeb Bush, or maybe it's just the same inevitability meme revving up:

Many if not most of 2012 GOP nominee Mitt Romney’s major donors are reaching out to Bush and his confidants with phone calls, e-mails and invitations to meet, according to interviews with 30 senior Republicans. One bundler estimated that the “vast majority” of Romney’s top 100 donors would back Bush in a competitive nomination fight.

Ramesh Ponnuru argued that Bush is a viable establishment candidate, despite his last name. Bush would be a divisive candidate, not just for Republicans, but would be forced constantly to distance himself from his brother and father during the general election, as well.

Florida insiders say he's running. The Week went further to say Bush is Republicans' "only option." After all of that prep work by others, Bush himself said Wednesday he's thinking about it. He'll have to do a lot of explaining over his support for the Common Core, over saying that breaking immigration laws can be an act of love, and over his questionable business deals.

The trouble is that we've heard Bushes run twice as conservatives before, and twice seen them fail to govern that way. As Ace of Spades put it,

I haven't seen this much buzz and hype about a product America had no particular desire for since Cop Rock.

There will be an unhappy ending to a Bush nomination, predicts United Liberty's Jason Pye.

That doesn't stop establishment types from implying, as in this snide, insulting, and race-baiting column, that all opposition to Bush's immigration reform stances are based on dislike for foreigners and that he's the inevitable nominee. All of that is, in a word, poppycock.

That same post is among a pack of articles attacking Rand Paul, both from the right and the left. This week it's Paul; next week it could be someone else. Conservatives buying into the attacks on the various candidates need to know that the other side will try to pick our guys off one by one, trying to clear the field for their guy (or gal). If you fail to defend an ally, or even worse, join in the attacks on candidates you don't particularly support, you will find allies scarce when your favorite is under the spotlight.

While I'd prefer to help elect some of those candidates over others of them, it's a good thing that we have such a large and diverse pool of potential small-government candidates to pick from. For once, it would be nice to see a Republican debate that puts winning issues like jobs and spending back on the table. It doesn't have to be the "next guy" in line.

Candidates who are thought to be inexperienced or too young to win still need to think about running in 2016. It usually takes more than one campaign to be elected president. All of them can help their cause by skipping a fund raiser or two for their 2016 campaign and helping out in 2014.

The Republicans are in the midst of a civil war. The old Progressive Republican Dinosaurs are not so popular and the energy in the party has shifted to the Libertarian / Constitutionalists. Romney was a good "moderate" candidate but 2 million Republicans didn't go to the polls and handed the election to Obama. He didn't energize the base. We can't be moderate in our desire for freedom and support of the constitution.

We need a candidate that taps into the anger and frustration with Obama and the Progressives. Rand Paul would be my choice but there are multiple candidates that would be more conservative than Jeb Bush. I can understand why a Liberal would like Jeb, he is a "New World Order" guy. He loves big government and he doesn't want to control immigration. So why would a member of FreedomWorks ever vote for him?

Give us more freedom and less government.

I'm going to be honest and throw my 2 cents into the ring here. Now- some of you commentators might know me as some of my more colorful comments I tend to make on this site. I am an unabashed Democrat and liberal. Yet I grew up in the rural South and have relatives on both sides of the isle. In many ways I get some of the values of both sides. But what's been happening of late, with perhaps the largest divide in history in regards to politics is untenable. Some of this was engineered, particularly via the influence of outside financial interests in the form of organizations like this one, with the goal to use wedge issues to do as that term suggests- create a wedge so that Americans will more easily take sides for the benefit of those aforementioned outside players.

But I digress. Here are my thoughts for 2016. I say this with sincerity. If the GOP wants to have a chance of winning in 2016, then I can assure you that the solutions isn't to promote super right wing, ultra conservative candidates. Jeb Bush was mentioned in this article. While I am not saying yes- he's the person to run, he is more or less the type of person the GOP needs to consider. Simply put, the GOP tried the ultra conservative candidate before and lost. There is a reason for this and its mostly due to rapidly changing national demographics. In other words, the country has less and less appetite for conservatives, and especially those who choose to focus on socially conservative ideology versus running the country.

On the other hand, I've heard Jeb Bush and Chris Christie talk and as mentioned, I am a Democrat, but to hear them speak as Republicans is in many ways refreshing because instead of waiting for whatever they say to come out sounding inappropriate, they sound like rational, intelligent, and thoughtful people. While I might not agree with their stance on everything, I do respect what they do say because I can tell real thought and meaning has gone into what they are saying.

So take that as a grain of suggestion. If the GOP wants a chance in 2016... then moderate candidates are the name of the game.

Thanks! Now we know which JournoList approved GOP Presidential candidates will be treated with kid gloves during the primaries.