Priorities: Study Shows Most States Value Coaches Above All Else

In nearly every state across the country, legislators are looking for ways to maintain vital services to the neediest among us. Education, police, fire and health services have been cut in efforts to trim government budgets, so what does it say about a state's priorities when the top paid public employees are athletic coaches? 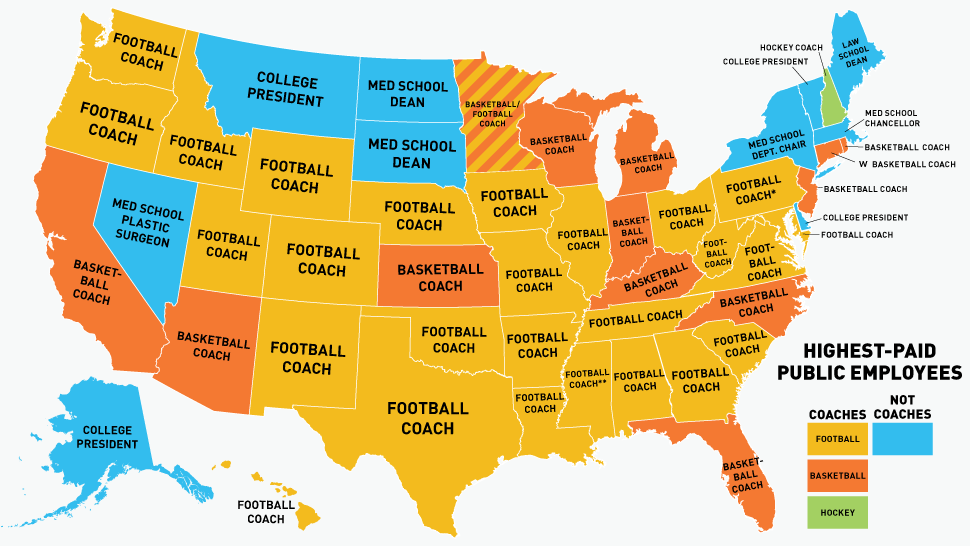 A recent study shows that, in all but ten states, the highest paid employee is an athletic coach. Usually this is a football coach, although a few states reserve the top-paying spot for basketball and, in one state, it’s the hockey coach. In the ten states in which there are state employees which make more than a coach, the position is held by another college or university position. In most cases, this is a department chair or college president. In Nevada, it is the medical school plastic surgeon. This means that, in every state, the highest-paid state employee is employed by a college or university. What does this say about our priorities?

Some will argue that the coaching positions bring money back to the school. As the study points out, though, coaches don’t generate revenue on their own, performance cannot be directly attributed to the coach, and it’s rare for the revenue generated to make its way back to the university itself. That means that the athletic departments use up all of the money they generate rather than supporting academic pursuits. So, it’s not as though these outrageous salaries can be justified with the argument that they help the student body at large. The academic positions make more sense, but it is still doubtful that paying exorbitant salaries to those in charge of these institutions pays off.

So, in every state, college employees are paid more than any other employee in the state. Not the governor at the helm, not an economist trying to bring prosperity to a state, or a law enforcement official working to keep the people safe. If the highest-paid official of a given state were an educational employee, it would make more sense for it to be the secretary of education who makes educational policy for the state. However, it is none of these people who, in short, actually do anything for the state. If that isn’t a sign that we need to reexamine our priorities, I don’t know what is.

Amelia Hamilton, I enjoy your work as a fellow fighter for freedom and I agree with the need to reexamine our priorities. However, I hope you tread lightly on these coaches. I am a coach and I know that it is only the rare few of us who make to these highest ranks of the profession that make these enormous salaries. The reason I say tread lightly, however, is because there are few among us coaches that would disagree with the notions of the free enterprise and competition that are fundamental to our cause for freedom. Not only do we not disagree we adamantly promoting these idea. It's the nature of the game so to speak. Perhaps our priorities are in the right places but our allocation of funds need to be reexamined. I'd love to see some of that money myself, but would even more rather see some of that money going to all the other sports programs throughout my state of South Carolina from the little leagues through high schools (both private and public). I'll also submit that while these high paid coaches may not seem to give us the bang for the buck in an obvious way, they do on the other hand provide us with leaders who are shaping the lives of thousands and thousands of young people in what, in the vast majority of cases, is a good way.

On Monday, the Congressional Budget Office (CBO) released its semiannual report on federal spending. The report, The Budget and Economic Outlook: 2018 to 2028, looks at trends in federal spending, budget deficits, and the share of the national debt held by the public. If one is looking at the report through the lens of fiscal conservatism, the picture is ominous to say the least.

Budget Deal Is a Fiscal Abomination

FreedomWorks vice president of legislative affairs Jason Pye released the following statement on the news of a budget agreement: