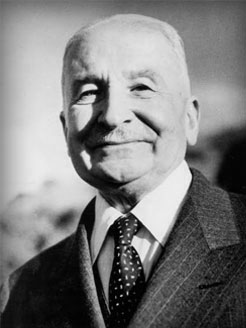 September 29th marks the 134th birthday of Ludwig von Mises (1881-1973), one of the most visionary and revolutionary economists in history. He won no Nobel Prizes, and he spent much of his life unappreciated, teaching in obscurity, but the work he left behind has served as the intellectual bedrock for libertarian economic and political theorists of the last half century. The ideas he pioneered are the ones upon which FreedomWorks was found, so on the anniversary of his birth, it's worth taking a moment to remember his contributions to the history of freedom.

Among the simple and most profound of Mises' teachings was the seemingly obvious realization that economics is the science of human action. People act to render their situations more satisfactory. Once they are satisfied, they stop acting. In his 900-page treatise of the same name, he develops this concept from self-evidence through its logical conclusions, tracing an entire system of economic thought. This stands in sharp relief to collectivist ideologies which ascribe action to communities and invoke mystical causes for recessions and expansions of the economy.

Only individuals act, not communities or countries or governments, and all economic events have a cause that is traceable to those actions.

Mises did not invent the idea that value is subjective, but he developed it to show the futility of utilitarianism and the misuse of economic statistics. Value is not inherent in goods and services; we ascribe it to them based on our preferences. Everyone's preference is different, and they change over time. You can't compare how much I value a set of goods to how much other people value them using numbers, because numbers are constants. Human beings are never constant, and they cannot be controlled like variables in a science experiment.

Mises' insight was that all economic statistics are merely historical data. They can tell us what happened, but they can't tell us why, and they can't tell us what will happen in the future. Today, too many economists think they can control people and micromanage economies through "big data", but the work of von Mises shows why this is never possible.

Perhaps the most influential of Mises' books, Socialism, undertook a systematic refutation of the collectivist economic system. The central problem with socialism from an economic standpoint is that the lack of a functioning price system makes efficient calculation impossible. When prices are centrally controlled, entrepreneurs and investors get bad information, leading to bad investments, leading to economic pain for the citizens. Only when prices are free to fluctuate can business react to changing conditions and consumer preferences efficiently, and create wealth for a society.

Today, minimum wages, trade barriers, and interest rates set by the government instead of the market are having exactly the effects Mises predicted.

Why Does This Matter?

Its easy to consign decades-old books on economic theory to the dustbin of history, ignoring their relevance to modern life, but this is a mistake. Ideas matter, and action taken based on the wrong ideas can, and has, had devastating consequences.

The enduring legacy of Ludwig von Mises is that no central authority - no government - can ever know enough to manage an economy, and that all attempts at intervention invariably lead to less efficiency, less productivity, and less wealth. His books remain as enlightening and relevant today as ever, and should be read by everyone who wants to understand how the economy really works.