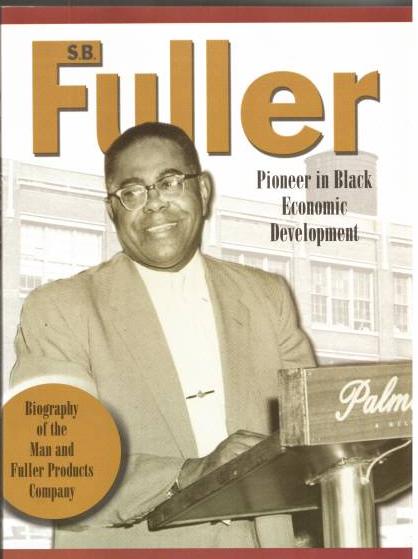 Born in the Deep South immediately after the turn of the century, S.B. Fuller’s rural black community knew only a life of appalling poverty. They worked for the white, landed Southern aristocracy as sharecroppers.

Life was as similarly harsh and short for the African Americans in Monroe, Louisiana as it had been for their enslaved ancestors.

With six brothers and sisters, Fuller and his siblings resorted to menial work in order to make ends meet. Luckily for the family, this was in the days before the 15 Now movement. Today, they’d surely be priced out of work.

The Fullers moved to Chicago as part of the Great Migration. His mother died when he was 17, and the family shunned state relief out of pride. The Fuller family would remain self-sufficient, because where there was a will, there’s a way.

Fortunate to be employed during the Great Depression -- especially as an African-American -- Fuller decided to chart his own course as a door-to-door salesman. It had been his mother’s idea. He had $25 in his pocket when he quit his job as manager of a coal field. “I could not get ahead by working for somebody else,” he later remarked.

Founded in 1935, Fuller Products Company first sold soap purchased from a wholesaler. Expanding to thirty other cosmetic products, Fuller eventually produced his own line. Investments in real estate and the newspaper business paid off as well.

By the 1950s, Fuller Products had $18 million in annual sales, a workforce of five thousand, and offices in 38 states. The company provided training to many future entrepreneurs and black executives, including a future company CEO.

S.B. Fuller was the richest African American in the country at the peak of the Jim Crow era. The odds had been stacked against him from birth, but he had a strong work ethic and perseverance. He felt a calling to inspire change in his own community through his own story of unlikely success.

Mr. Fuller’s strategy for improving the lot of the average black American differed from the leaders of the the Civil Rights Movement. According to Fuller, discriminatory state mandate in the form of Jim Crow laws did significantly hinder black advancement, but the strategy of many civil rights leaders in looking to politicians -- the originators of segregationism -- was flawed. While Martin Luther King utilized the political process as a vehicle for change, Mr. Fuller called on black Americans to embrace entrepreneurship for self-made opportunity.

In 1963, Mr. Fuller made a speech to the National Association of Manufacturers that cemented his future absence from the chronicles of liberal historians. He spoke eloquently and glowingly of “the established economic system of most modern civilized countries,” free market capitalism, as misunderstood among the black community and American society as a whole.

In an age of consumerism, Mr. Fuller argued that the American economy was based largely upon the success of retailers. Bemoaning the lack of African American entrepreneurs, he claimed that most retail establishments in black communities were owned by whites living elsewhere. He explained the persistence of poverty thus:

“For every evening, at the close of business, the substantial citizen leaves that community and goes to another community to live, thus leaving black community impoverished, and the wealth derived from the community through retail sales is transferred to the other community, thus building up that community. These merchants are not to be blamed for this, because the supply and demand must be satisfied. Since blacks do not supply the demand in their own communities, the white man must come in, and he takes advantage of the opportunity. Then blacks think that there is a racial barrier that keeps them from making progress. Therefore, blacks ask for legislation to remove the barrier which they automatically created themselves, due to their own lack of action.”

Related to the selling of the notes, in 1968, Mr. Fuller was charged with violating the Federal Securities Act by “misstating material acts to purchasers of promissory notes.” Fuller pled guilty.

The company filed for bankruptcy in 1971, but not before lifting countless African American employees out of poverty through the chance at a quality job, a workplace free of race-based discrimination, job training, and small loans to hopeful entrepreneurs.

Martin Luther King often spoke of the “bad check” written to the African American community in the form of a false promise for a chance at the American Dream. Jim Crow segregation was a direct assault on the “pursuit of happiness” offered to all Americans in our founding documents. But S.B. Fuller was determined never to let others write his own destiny. He overcame seemingly impossible odds, making his own success, and in the process inspiring many African Americans to reject government intervention as a source of relief.

Leftists ignore Mr. Fuller’s legacy, in the words of the late civil rights activist Vincent Baker, because politicians "fear the coming of the truth, because the truth might make black people free… The outrage against Fuller's words that blacks should exert their efforts to become economically independent is evidence of the wedding of this dependency concept with the civil rights concept. We tend to confuse dependency with civil rights.”

FreedomWorks honors the legacy of Mr. Fuller through Empower, an outreach program “aim[ing] to educate individuals of all races, colors and creeds on issues of economic empowerment.” As we approach the observation of Martin Luther King’s birthday, consider learning more about Empower.