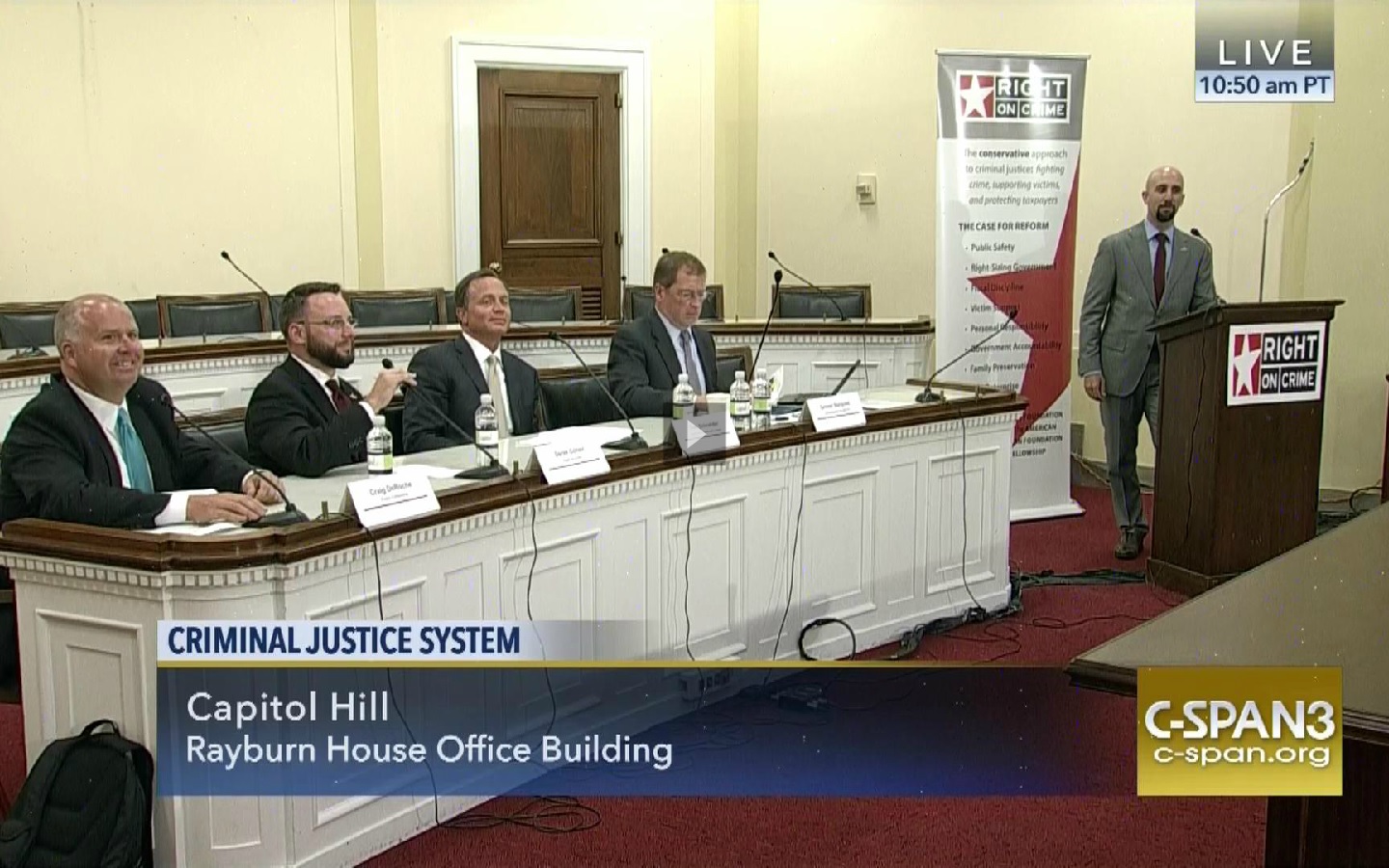 On July 5, 2016, prominent conservatives such as Craig DeRoche, Derek Cohen, Dan Schneider, and Grover Norquist all gathered in the Rayburn House Office Building as a part of Right on Crime’s "The Success of Conservative Criminal Justice Reform." Each of these men holds an important position within the sphere of conservatism. Craig DeRoche is a Republican and a former member of the Michigan House of Representatives. Dan Schneider is the Executive Director of the American Conservative Union (“ACU”). According to the American Conservative Union’s website, Mr. Schneider “is a lifetime member of the National Rifle Association, an Eagle Scout, a former board member of Americans United for Life and [has] served two faith-based missions in the Peoples’ Republic of China .” Grover Norquist is a tax reform activist and the president of Americans for Tax Reform. All these men hold right-wing values and beliefs, and they have come together to acknowledge that criminal justice reform needs to be implemented.

The main theme addressed in the beginning of the lecture concerned low taxes and government spending. These panelists acknowledge that the system we have in place has cost a lot of money - taxpayer money. Conservatives are the ones who typically favor low taxes and less government spending. For a long time, however, this principle was not apparent with regard to the justice system. During the tough-on-crime era, enacting laws that put people who committed victim-less crimes behind bars was typically favored. That is starting to transform as Dan Schneider, speaking on behalf of the ACU, highlighted when stating that mass incarceration of people has had a drastic effect on their liberties. He provided a long testimony as to how this practice is a violation of our constitutional rights as Americans. He also stated “At the American Conservative Union, we stand for the Lockeian, principles that the essential role of the federal government is to protect life, liberty, and property.” He goes on to say how our current system does not seem to value these principles and that “we are locking up all sorts of people because we’re mad at them, for all sorts of reasons that have nothing to do with our safety, and it’s driving up costs. And more important than the costs, it's depriving people of their liberty .”

The President of Americans for Tax Reform adds even more emphasis on conservatives being advocates for justice reform. He states “on a right-left coalition, there is no compromise on principles here. We’re working to do the same thing, perhaps for different reasons.” He adds even more compelling reasons as to why our liberties are being deprived. He talks about civil asset forfeiture and gives a startling fact that “there’s more money taken away from Americans through civil asset forfeiture last year than robberies.” This is a major restriction on American civil liberties, and it goes back to what Schneider talks about in regards to “depriving people of their liberty.” The government is doing a better job of “stealing” than the actual criminals themselves. The tales of government taking property do not end there as Dan Schneider tells the story of a man who had $40,000 worth of property taken away from him by the ATF.

This event concluded with Schneider talking about how we should try to live in a voluntary society, that we need to take care of each as a community and create prisons for people “that we’re afraid of, not people we’re mad at.”

The Republican Party is the party in our two-party system that is supposed to stand for small government and limited spending. Efforts to reform the justice system demonstrate how conservatives are stepping up to uphold these principles. The list of conservatives in favor of justice reform is not limited to just these men, as many conservatives in Congress also are taking steps toward justice reform. John Cornyn, Mike Lee, and Jason Chaffetz are just some of those congressmen. Justice reform is currently supported by advocates from both sides of the aisle, but it’s the Republican Party that should fully embrace and lead in efforts which correspond to the idea of true freedom and liberty.