With less than a week of planning, on a bitterly cold December night, just hours before a Christmas Eve vote, some 40 diehard activists made their way, candles and signs in hand, to Senator Webb's office in Northern Virginia.

They hand-delivered letters from friends and neighbors, sang songs to keep warm, and passed out cookies and hot cocoa, while the evening traffic rolled by and drivers honked their support.

All to oppose a health care "reform" bill that is rife with political favoritism, unfunded liabilities, and constitutional relativism. 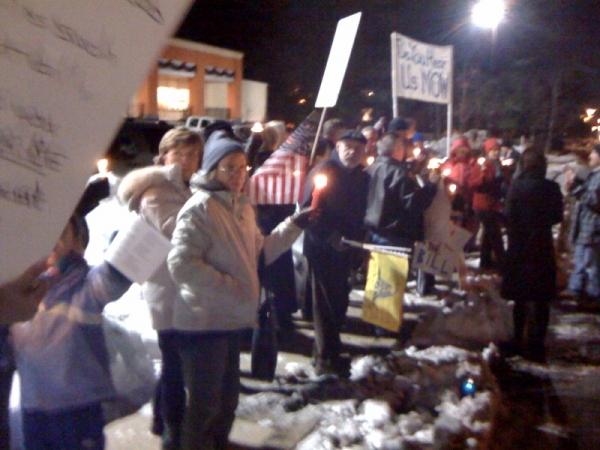 Still, the mood of the gathering was optimistic and upbeat. The folks who turned out knew it was probably too late to change Senator Webb's vote, but every time groups like this come together, they get a little bit stronger, a little bit savvier, and a little bit more determined.

Even if the battle is lost on the national level, every one of these activists is ready to put pressure on their state legislators to support measures like Del. Bob Marshall's VA Health Care Freedom Act, which would essentially make ObamaCare unenforceable in Virginia by voiding the individual mandate.

And state legislators are far more accessible, and thus susceptible to public pressure, than the elected royalty in D.C.

Looks like 2010 is going to be another long year.