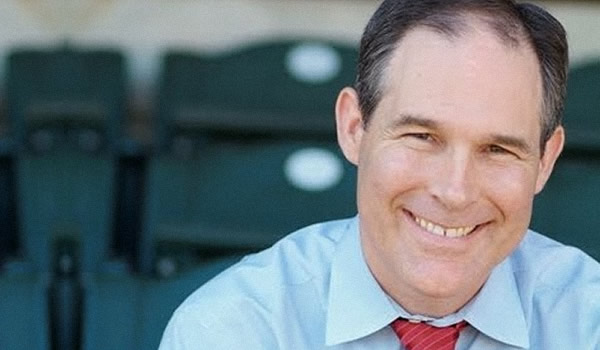 The Facts: Pruitt opposes the Clean Power Plan (CPP) and filed a lawsuit against the EPA over the rules, because it heavily regulates a sector of the government that should first be left to the states. CPP would also harm the economy in terms of raising prices of goods and services, costing up to $73 billion annually. That’s a lot of money spent only to decrease global warming by, literally, a fraction of a degree.

Energy is an immense economic and growth opportunity and is crucial for life and prosperity, as well as technology and business. Over regulating energy in the way that these rules require would simply be unaffordable and unreliable. Simply put, this bill eliminates thousands of jobs and drastically increases rates on energy. This bill also continues to hand the authority of Congress to the EPA. There is also a huge job market controlled by the energy industry, and over regulation eliminates many of those, negative impacting workers, their families, and local economies.

The Facts: The difference in a Pruitt-led EPA is a return to balance of state and federal powers. He will re-establish a respect toward the states with regard to environmental policy. President Obama relied heavily on executive actions. Pruitt, on the other hand, has a known history of supporting federalist ideals. Most notably, he established the first-ever Federalism Unit in the Oklahoma attorney general’s office. The unit’s sole focus is to restore state sovereignty “from the encroachment of government.”

To argue that Pruitt will dismantle and destroy the EPA from within is hardly a credible argument. Pruitt will "probably do more for the environment than Mr. Obama ever did because he will make sure that rules issued by the EPA are rooted in law and thus won’t be overturned in court."

The Facts: The construction of the Keystone XL pipeline spans over 1,179 miles through five states, which would create multistate increases in jobs for a long-term timeframe, and boost the economy of all of the states included. The pipeline is the most environmentally responsible way to move oil. According to the State Department, from page ES-34 of its January 2014 report, alternative scenarios, like rail and tanker, would significantly increase emissions compared to Keystone XL. The Facts: In this case, ThinkProgress and other publications have made similar accusations are guilty of promoting fake news. In an op-ed at National Review, Pruitt and Alabama Attorney General Luther Strange wrote, “Healthy debate is the lifeblood of American democracy, and global warming has inspired one of the major policy debates of our time. That debate is far from settled. Scientists continue to disagree about the degree and extent of global warming and its connection to the actions of mankind. That debate should be encouraged — in classrooms, public forums, and the halls of Congress. It should not be silenced with threats of prosecution. Dissent is not a crime.”

This statement does not come close to being a denial of climate change. All Pruitt and Strange wrote is that there’s still an ongoing debate about anthropogenic climate change. As noted in the Morning Consult, “Pruitt is committed to clean air and clean water, and to restoring EPA to its original mission of enforcing the environmental laws written by Congress. He has laid out a view that human activities do impact the climate, and we should be encouraging a healthy debate over the government’s proper role in addressing them rather than trying to shut down the discussion.”

Those who are saying that Pruitt doesn’t believe in anthropogenic climate change are editorializing, not reporting the facts, based on a couple of lines from an editorial.

Claim: Scott Pruitt doesn’t care about the environment and will allow states to pollute as they desire (Source: Environmental Working Group, December 8, 2016)

The Facts: To say that Scott Pruitt doesn’t care about the environment is patently false. A look at his record as Attorney General of Oklahoma will reveal that he helped settle a centuries-long dispute between the state of Oklahoma and Native Americans over water rights. The agreement gives Native Americans a say in how water from their territories is used and sold, with any proceeds going to help fix Oklahoma’s water infrastructure which is in a state of disrepair.

Furthermore, Pruitt reached an agreement with the Attorney General of Arkansas to help clean up the Illinois River. The group, Save the Illinois River Inc., hailed the agreement as “better than we had hoped for.” Environmental issues are of concern for Pruitt, but he wants the EPA to work with states, rather than circumvent them.

Unfortunately, the radical environmentalist left wants to restrict free speech by going after anyone who doesn’t support their costly agenda. One radical environmentalist publication, Grist, once openly advocated for “war crimes trials...some sort of climate Nuremberg” for those who disagree with their extremist views. Christopher Horner once wrote that today’s environmentalist movement is a lot like watermelons: “Green on the outside; red to the core.” That authoritarian streak is noticeable when it comes to one of our most basic liberties.

Claim: Scott Pruitt received oil and gas industry contributions to his campaigns and is an ally to private sector players who share his view. (Source: The New Yorker, December 7, 2016)

The Facts: Oklahoma is a resource-rich state. Pruitt’s challenge in Oklahoma has been to enforce both state and federal environmental statutes while limiting federal authority and defending consumer rights. Contrary to accusations, Pruitt has made it a point to argue against major power companies to make sure that rate structures were appropriate.

Most importantly, Pruitt is a firm believer in the rule of law. He is currently the senior law enforcement officer for the state of Oklahoma’s environmental protection statutes. The Clean Power Plan and the Definition of Waters of the United States have both conflicted with past precedent and EPA statutes. For those reasons, both rules in both cases have been stayed. Pruitt was a part of those stays, demonstrating his strict adherence to law and making sure that EPA activities stayed true and consistent with the agency’s own statutes --- a far cry from accusations claiming that his actions are dictated by his personal relationships with the oil and gas industry.

The EPA is in need of regulatory reform, and Attorney General Pruitt will be the right person to implement said reforms. He has the necessary experience to approach the subject delicately and appropriately to ensure that resources are not misspent and are instead used to protect the American public.