Raise The Minimum Wage? Not In The Obamacare Economy 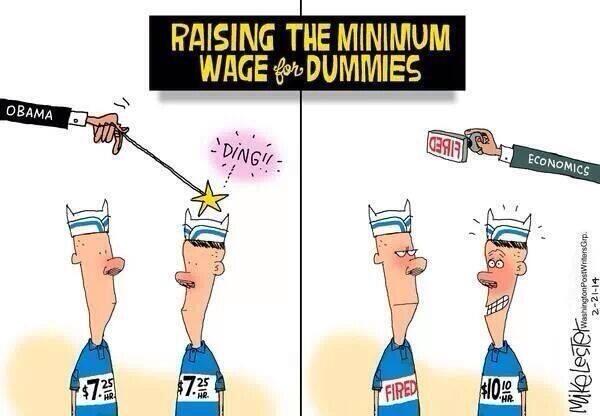 Wages Are A Reward For Work

Senate Democrats are fond of saying that Americans deserve a shot at success, and so the minimum wage must be increased. But that's not what increasing the wage would do. In fact, it would do the opposite. Raising the minimum wage would teach people who have jobs that their only way to get a raise is through political action, and would further hammer home to those who aren't working that they aren't worth anything.

Conservatives usually talk about the minimum wage from the perspective of the employer -- that forcing employers to pay more per hour for the same work will force them to hire fewer people, or to give those whom they do hire fewer hours. But that really doesn't show the real problem.

Wages tell us something about ourselves. They tell us how much our work is worth. With experience in a job, or with the right circumstances shifting to a new job, we can get a raise and get more reward for our work. Millions of people find jobs when unemployed, get raises, get promotions, and find new employers every month in a healthy economy. People get fired, too, and that gives them information about their work, as well: either do it better next time, or find another field because you can't really succeed in this one.

When a young person is looking for that first job, whether it's in high school or afterward, they need some kind of work, any kind of work, to show they can be of value. There are few worse feelings than having nothing to do, nowhere to go all day, because no one thinks you have anything to offer.

So all along the pay scale, people get some idea of how valuable they currently are to the economy as a result of how much people are willing to pay them. Working hard, learning the job, and helping the team, a person makes himself or herself more valuable and can expect to get paid more.

Our pay is how we know how well we're doing.

What happens when a person is turned down for a minimum wage job? They learn that they are not worth the minimum rate of pay, that they are worth nothing.

The minimum wage tells people who are unemployed that they are worthless.

It doesn't matter that there is Welfare, SNAP, WIC, Medicaid, and the host of other government programs. Those programs don't give people dignity, and in fact, they rob people of dignity. Since eligibility for those programs basically depends on not having a job, those trying to enter the constructive economy have to do without the government subsidies. The subsidies are a trap.

For instance, the new minimum of $10.10 per hour would boost a 30-hour minimum wage employee to $15,750 per year, just past the cut-off for Medicaid eligibility for a single parent, and well past it for a single person. Get a minimum wage job, lose your Medicaid benefit.

And here's where Obamacare kicks in. The law mandates (despite the President's illegal unilateral delays of it) that employers offer those working more than 30 hours per week "affordable" health insurance. But employers without full-time employees are not forced to comply with the employer mandate. Since raising the minimum wage will encourage employers to cut back on hours, it intensifies Obamacare's pressure on the people at the bottom.

Who Does It Help? Labor Unions

The wage scale for many labor unions is based on a multiple of the minimum wage. Raising the minimum wage gives those union members a raise, without having to negotiate it with their employer.

The casino workers' unions who helped reelect Senator Reid would be pleased with a higher minimum. The millions of Americans still out of work in the Obamacare economy should be less pleased, as should the hundreds of thousands more newly unemployed who will get the message that they are economically worthless.