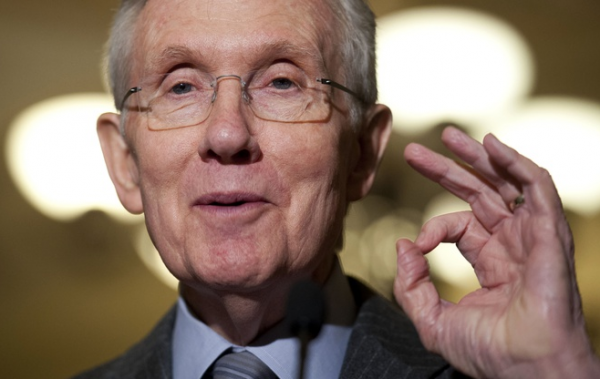 People across the country understand what it means to change the rules in the middle of the game, which is what the nuclear option does. It eliminates the filibuster on judicial nominees, a tradition of the Senate that's been here for over 200 years.

The Founding Fathers established the filibuster as a means of protecting the minority from the tyranny of the majority.  The filibuster is not a scheme and it certainly isn't new. The filibuster is far from a procedural gimmick. It's part of the fabric of the institution we call the Senate. The roots of the filibuster are found in the Constitution.  It's within the vision of the founding fathers of our country. They established a government so that no one person and no single party could have total control.

Now, Democrats want to blow up 200 years of Senate history and change the rules simply because they aren’t getting their way on a handful of radical nominees.  The President has come to the majority in the Senate and basically said: Change the rules. Do it the way I want it done.

They realize that changing the rules and assaulting this constitutional tradition may sound great today when they have the majority, but over the long haul it is not good for the Senate or good for our country.

It also is going to assault a very fundamental principle of checks and balances, which gives to the Senate the last word when it comes to advice and consent of judicial nominees and presidential appointments.

The nuclear option abandons America's sense of fair play. It is the one thing this country stands for: Not tilting the playing field on the side of those who control and own the field.

Right now we are faced with rising gas prices, skyrocketing tuition costs, a record number of uninsured Americans, and some of the most serious national security threats we have ever had.  But if the right of free and open debate is taken away from the minority party, the partisan atmosphere in Washington will be poisoned to the point where no one will be able to agree on anything.

Make no mistake, this nuclear option is ultimately an example of the arrogance of power.  It is a fundamental power grab by the majority party, designed to change the reading of the Constitution.  It is nothing more or nothing less.

Isn't what is really going on here that the majority does not want to hear what others have to say, even if it is the truth?

We owe the people more than that. We owe them much more.

Note:  The entirety of this post (minus a few very minor adjustments for proper tense and context) has been written using actual quotes from prominent Democrats regarding the nuclear option for killing the filibuster.  In 2005.  When the President's last name was Bush.

The fact that a Republican was in the White House at the time has certainly changed the tune for such individuals as Barack Obama, Hillary Clinton, Harry Reid, Joe Biden, and Dick Durbin.

Their hypocrisy is best illustrated using their own words.

All of these quotes can be found in the links below, listed in no particular order.

Opposition to the 'Nuclear Option' Grows

Obama: Nuclear Option Not What Founders Had In Mind, Will Poison Washington

Biden: Nuclear Option Vote The "Single Most Significant ... In My 32 Years In The Senate"

Harry Reid: Filibuster Part Of Fabric Of Senate, Meant To Be Used For Executive Nominees

Obama was for the filibuster in 2005

Clinton: If President Can't Get 60 Votes For Nominee, Should Rethink Nominee