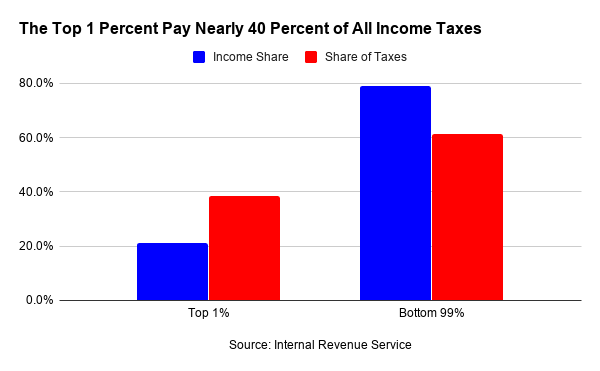 Unsurprisingly, the audience expressed disbelief, which, one can reasonably surmise, comes from the class warfare rhetoric of Democratic presidential candidates and congressional Democrats, who never fail to claim that higher-income earners don’t pay enough in income taxes.

Anyone who watched the Democratic presidential debate on Tuesday saw the class warfare rhetoric was very much at the forefront, particularly from socialist candidates like Sens. Bernie Sanders (I-Vt.) and Elizabeth Warren (D-Mass.). Sanders, for example, said, “[T]he American people do not want tax breaks for billionaires. They want the rich to start paying their fair share of taxes.”

Well, Paul was right. The top 1 percent do, in fact, pay a disproportionate share of income taxes compared to the share of taxable income earned. In fact, PolitiFact has already given Paul a “mostly true” rating. The statistic he used comes from the Joint Committee on Taxation (JCT), which, earlier this year, released its tax revenue projections for 2019. The report found that those who earn $50,000 or less have a negative tax liability and a negative tax rate.

Now, it’s important to note that these data reflect the distribution of income taxes under the Tax Cuts and Jobs Act, which became law in December 2017 and took effect for individual income tax filers in tax year 2018. Additionally, these figures don’t include other taxes paid by individuals that are collected by the federal government, such as payroll taxes.

Some may say that the share of the income tax paid by the top 1 percent of income earners was higher before the Tax Cuts and Jobs Act became law. Although these figures came from a different data set, we’re previous explained that the top 3 percent of tax filers in tax year 2016 paid 51 percent of all income taxes, according to data collected by the Internal Revenue Service. Data for tax year 2017 are available, and we’ll explore what that data say below.

Put simply, Democratic presidential candidates, as well as congressional Democrats, aren’t being honest about income taxes. Confiscatory taxation, which is what many Democrats appear to want, would reduce the incentive to work and harm investment in the economy. That would translate to lost economic growth and fewer available jobs.

We have to stop treating “wealth” and “profit” as dirty words. Where does one think jobs come from? Without wealth and profit, the incentive to create goods and services wouldn’t exist and, therefore, jobs wouldn’t exist. This is what distinguishes a mostly free economy, like we have in the United States, from a largely centrally-planned socialist economy that rations goods and services.