The Reality of America's Finances

When Washington raised the debt ceiling this week, the Beltway media breathlessly reported that the fiscal crisis had ended. Lawyers danced in hallways, bureaucrats twerked on the Metro, congressional aides kissed strangers in the streets — the Tea Party has been defeated! It was like VJ day for wonks.

As our political class exchanged high fives and reporters praised a return to “sanity,” I wondered how these odd creatures defined insanity.

So I made this infographic: 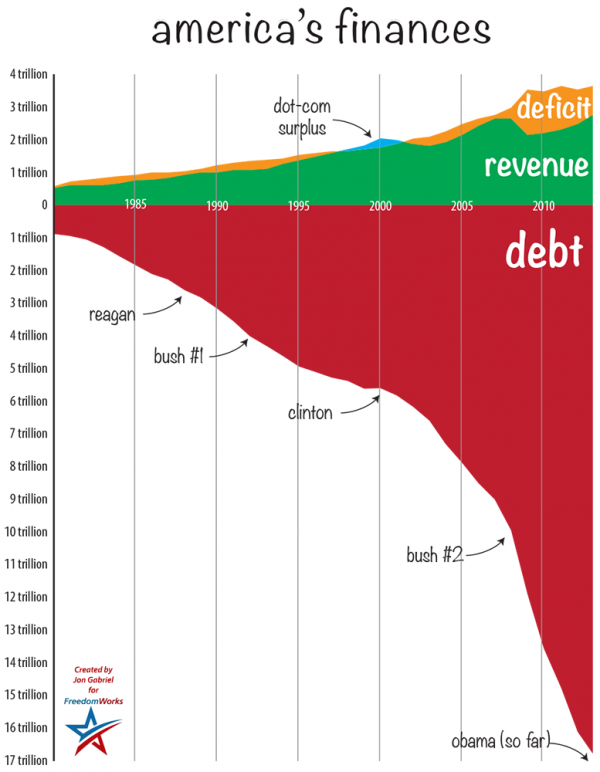 Since most graphs look like this, I focused on just three big numbers: Deficit, revenue and debt.

The analogy is imperfect, but imagine the green is your salary, the yellow is the amount you're spending over your salary, and the red is your Visa statement. Then imagine your spouse runs into the room and shouts, “great news honey, our fiscal crisis is over. We just got approved for a new MasterCard!” Your first call would be to a marriage counselor or a shrink.

Washington likes to talk about sustainability. Forget sustainable — how is this sane?

Yet when a conservative hesitates before raising the debt ceiling, he's portrayed as a madman. When Paul Ryan offers a thoughtful plan to reduce the debt over decades, he's pushing grannies into the Grand Canyon and pantsing park rangers on the way out.

Since posting this chart to Twitter, the reaction has been intense. Some on the right think I’m too tough on the GOP while those on the left say it doesn’t matter or it’s all a big lie. Others tell me that I should have weighted for this variable or added lines for that trend. They are free to create their own charts to better fit their narrative and I’m sure they will. But the numbers shown above can’t be spun by either side.

Math doesn’t care about fairness or good intentions. Spending vastly more than you have isn’t good when done by a Republican or a Democrat. Two plus two doesn’t equal 33.2317 after you factor in a secret "Social Justice" multiplier. And if our current president accumulates debt at the rate of his first four-plus years, the national debt will be $22 trillion by the time leaves office.

So post this chart to Facebook, Pinterest or on your local grocery store’s bulletin board. If enough people see it, maybe — just maybe — those who want to increase the debt will be viewed as the “crazy” ones.

(1) We cannot win on this issue so long as we fight 'head-to-head' with the Democrats on the national level. At that level they can defend 'food for the elderly', 'medicine for sick kids', 'cleaning up chemical spills', 'recovery after natural disaster' to convince the people that the budget can't be cut. They have succeeded in making this a "nationwide issue" and as long as they can keep it at that level they will win more often than lose. (2) To change this into a winnable debate Conservatives need to stop talking about cutting spending and change the debate to "Who is in control of the spending". By Original Design almost all domestic policy and spending was a state function. If we restore (department-by-department) the authority over domestic issues and programs and the tax revenues that support it, to the states, this problem will solve itself. (3) States will modify the federal systems and authorities they receive in accordance with what their people think is best. (4) Some will be more Conservative and some more liberal than the federal government which includes both conservative and liberal regions. (5) Those states that find the best balances of government management vs. individual freedom will prosper and those who find the worst balances will suffer. If one side's theories really are better than the other side's theories, that difference will be shown in 50 experimental laboratories and the people will see what works and what doesn't and the worst-run states will be moved to copy the better-run states. (6) And to win this battle we can argue that; (a) Washington is dysfunctional (b) You can have more impact on policy in your state than in the federal government (c) If you want a "social justice" society, you can achieve that without having to fight with the states in which Conservatives are the majority. You can have your "progress" and prove its superiority now instead of having to wait decades to see the system you want. (d) The federal bureaucracy is too large, distant and unresponsive and smaller, state bureaucracies would be more responsive and answerable to the people they serve. (e) These are just samples. Shifting to a focus on restoring state authority capitalizes on current overwhelmingly supported complaints about government, offers the opposition a compromise in which they get to do what they want in the blue-states and avoids the issue of federal over-spending being unstoppable because stopping it would hurt too many Americans. And it will return the federal government's focus back to the more than complex enough issues of dealing with other countries.

And the Administration says that there just isn't anywhere to cut when it comes to spending. INSANE!!! How about the billions in income tax credits going to people who have never filed an income tax return? or the billions in arms given to the Pakistanis while our Government does its best to disarm Americans? IN-freakin'-SANE!

would be interested in your source of data. I tried to make a chart like this but couldn't find all I needed. Though I guess I was trying to do it as a % of GDP, so that made it a little harder.

oops. posted in the wrong spot.

And the Administration says that there just isn't anywhere to cut when it comes to spending. INSANE!!! How about the billions in income tax credits going to people who have never filed an income tax return? or the billions in arms given to the Pakistanis while our Government does its best to disarm Americans? IN-freakin'-SANE!

As much as I can't stand Obama, please show this with who controls Congress instead of the President. That is more accurate as to this mess.

Look up the word inheritance along with tax breaks and you get the idea of how the huge deficit shown above occurred. We have way over spent on defense. We do not have control over spending for special interest projects. We still have not implemented the health system necessary to controlling the cost that remain uncontained, i.e. pharmaceuticals, medical equipment, hospital costs, medical decisions, insurance over-head, and the like. Yes we do need a smaller and more efficiently operated government and all levels, federal, state, county and city. However, until we find a way to contain special interests and lobbyists (including trial lawyers) we are just spinning our wheels.

Tim, you're absolutely correct in your assessment. But the graph doesn't include off-budget indebtedness, just the $17T already run through the Treasury. If the debt included even the present value of entitlement obligations, the total will exceed $100T. What can't continue, won't. What can't be repaid, won't be.

Re Richard Clark, correct, but there's more to it. The only way you can get to a debt total larger than the sum of receipts and borrowed money is to sum future spending commitments into the debt. This is the definition of entitlements - a spending commitment that is not discretionary. Debt must include present and future indebtedness for the totals to work.

This is no different than comparing the indebtedness from a mortgage to the annual spending of an individual. The apparently massive debt could continue into perpetuity, as long as the Federal Government has the means to service the debt (ie interest and other annual commitments). However, the deficit is clear evidence that we currently do not have the means to indefinitely service the debt. And the rate of growth of the commitments is indeed frightening.

Ralph--you can't be serious. Revenue plus deficit IS total government spending. The debt grows by the deficit incurred. I guess the low information voter is everywhere.

I think you should add another component to show total government spending.

Why is the amount of debt growing faster than what is needed to fund the deficit?