Regulating the Hope Out of Natural Gas 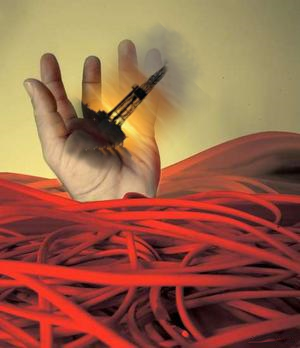 ng, or “fracking”, seems to be a new American energy solution, or problem, depending on one’s view. Various parties, from environmentalists to businesses are heralding natural gas as the answer to our national energy crisis. Proper fracking harvests large quantities of natural gas safely and at a reasonable cost. It can decrease energy bills at home, move America toward energy independence and more – if the government does not murder the industry. At a recent briefing hosted by the Environmental and Energy Study Institute and the Heinrich Boell Foundation, the panelists ranged from a German state legislator to the former secretary of Pennsylvania’s Department of Conservation and Natural resources. Despite their vastly different backgrounds, panelists echoed each other on one message: regulate, regulate, regulate.

Jeanne Briskin, of the Environmental Protection Agency’s Office of Research and Development, laid out the EPA’s fracking investigation, a plan so constructed that it will inevitably find fracking in need of federal regulation. The investigation uses case studies scattered throughout the country, and works with federal, state, and local government agencies as well as industry and environmental groups to study the effects of fracking on drinking water. The study, Ms. Briskin admitted, is not water-tight. Many natural gas-rich areas have high levels of naturally occurring chemicals, such as iron or methane. The EPA will not actively identify possible naturally occurring chemicals before the study. High chemical levels are noted only if they appear in the post-fracking water, which is pumped back to the surface, treated, and disposed of after the operation is finished. Ms. Briskin explained that if chemicals appeared in the frack water, the EPA would note it; and would somehow check to see if there were outstanding levels of naturally occurring chemicals in the area, rather than blaming fracking. But the EPA would not note surface contaminants or other man-made pollution if the site had been used as a dump. The EPA’s study is not thorough. It leaves many possibilities for naturally occurring chemicals or surface contaminates to be misconstrued as the results of fracking that could ultimately lead to regulation.

Wibke Brems, a state legislator from Germany, extolled the supposed success of clean energy and regulations in Germany, and how her country should be a model for the United States. Fracking occurs in Germany, but it is not enough to disclose injection fluid components to the government – to be safe and truly green, it must be further regulated. Germany’s clean energy industry now supplies 17% of the country’s electricity, and 9% of heating; a great success story, Ms. Brems claimed. This achievement has prompted the country to seek energy independence, using only clean energy, by 2050. Yet she made no mention about the cost of the green energy, reliability, and if it can be effectively stored.  If the energy is not there to consistently provide electricity, heating, etc., then it does a green energy country no good. It may as well be experiencing an energy drought. Ms. Brems may be pleased with her country’s progressive energy attitude, but new government mandates are not a viable solution for America’s energy producers.

John Quigley, the former secretary for Pennsylvania’s Department of Conservation and Natural Resources, argued that fracking for natural gas must be heavily regulated by both federal and state agencies if it is to be an energy triumph for America. The EPA study must establish new federal fracking regulations, he claimed, and then stricter state-specific regulations must be enforced. Apparently current state regulations, which have been in place for half a century,  are not enough.  Mr. Quigley dismisses the fear that additional regulation will dramatically alter natural gas prices, stating that it is a “cheap” production, high-profit gas. Further regulations, he argues, will barely be a blip on the fracking companies’ radars.

Fracking for natural gas is a way for the United States to plug the growing energy crisis, but overregulation will kill that blossoming hope. Mr. Quigley does admit that increased regulations will hurt extraction companies, but that it is necessary for a low carbon industry, disregarding the amount of damage heavy regulations would do. The price of natural gas turns a healthy profit for companies now, but layers of oversight and regulation are expensive and may inhibit further investment in this critical component of the energy sector. Companies will naturally try to pass as much of the regulatory burden as possible on to the consumer, increasing his light, electricity, and heating bills. Fracking can bring a new energy hope to America, but only if the people do not let the bureaucrats legislate it away from them.

Hello Andrea ! Such an informative article posted here. Yes, I agree with your knowledge for natural gas and saving energy strategies on it. Now a days, companies are prompting all the expenses for the natural gas on consumers so that natural gas is going more expensive and people belonging from middle class can't afford it. Our government should need to think about this issue and provide solutions against it.