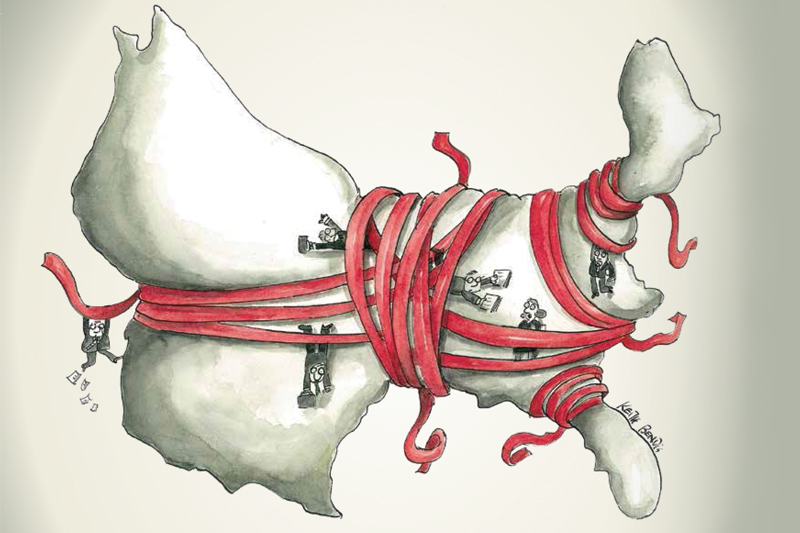 But will this hopeful trend continue with a regulatory system that is 70 years out of date? A system that continues to cripple small businesses and struggling families across our nation.

Last February, Maxine Turner’s family business Cuisine Unlimited, operated by her and her husband Marv along with their two sons Aaron and Jeff Turner, was awarded a major catering contract for all food services at the new performing arts center in her hometown of Salt Lake City. This new contract will require them to make a major investment in equipment and small wares, and they will be able to hire more than 50 additional staff. Unfortunately, red tape turned what should have been a golden opportunity into an unbelievable headache.

Maxine’s company immediately applied for an SBA loan, but they soon learned that their 37-year-old, well-established company did not qualify, even though they have had numerous successfully managed SBA loans in the past. Three banks informed them that their rating, according to new bank regulations imposed by Dodd-Frank, disqualified Cuisine Unlimited from loan consideration.

“It should not be so hard for us to take advantage of a new contract. Why does it seem as though the government is the wind in my face instead of at my back?” - Maxine Turner

Maxine’s story is not unique. As chair of the U.S. Chamber’s Small Business Council, she hears similar stories from small business owners across the country who are struggling under the weight of over-burdensome regulations. Under the Obama administration, over 22,000 new regulations were put in place costing American taxpayers over $1.886 trillion in 2016 alone, that's over $16 trillion throughout Barack Obama’s two disastrous terms that crippled small business and put thousands of hard working Americans out of work.

President Trump through executive order has called for a Regulatory Reform Task Force to “evaluate existing regulations (as defined in section 4 of Executive Order 13771) and make recommendations to the agency head regarding their repeal, replacement, or modification, consistent with applicable law. At a minimum, each Regulatory Reform Task Force shall attempt to identify regulations that: eliminate jobs, or inhibit job creation; are outdated, unnecessary, or ineffective; impose costs that exceed benefits”

On March, 29, the House passed H.R.5 - Regulatory Accountability Act of 2017. Introduced by Rep. Bob Goodlatte (R-Va.), this legislation would require transcripts from testimonies, and other papers filed in the rulemaking process be made available to the public. H.R. 5 requires a more extensive cost-benefit analysis of potential regulations and brings together multiple pieces of legislation including an amendment of the Small Business Regulatory Flexibility Improvements Act which requires rulemaking requirements and procedures of federal agencies that affect small entities be expanded, this no doubt will limit the arbitrary power, and increase transparency within the rulemaking process.

Furthermore, H.R. 5 includes a requirement for a detailed statement concerning any proposed rule, that highlights the estimated impact of a proposed rule on small entities, and a description of any disproportionate economic impact the rule would have on small entities. H.R. 5 would eliminate the authority of an agency to waive or delay the completion of such analysis. To bring more transparency to the rulemaking process, H.R. 5 would require that each federal agency submits a monthly report for each rule proposed or expected to be proposed; the report must include estimates of the cost and economic effects of the rule. Also within the legislation that has yet to be introduced to the Senate, is a requirement that these reports must be published publically and made available to the American people.

With our national debt looming $20 trillion, it is time for an ax not a scalpel approach to regulation reform. The American people can no longer afford $2 trillion every year in regulatory cost. With the average 2015 pre-tax income at $69,629. U.S. households “pay” $14,809 annually in embedded regulatory cost and small businesses are “paying” $11,724 per employee in regulatory cost. This level of disregard for American workers is unacceptable, how long will our elected officials let this continue?