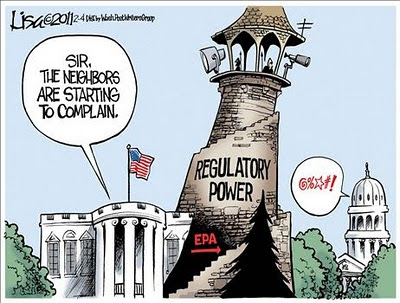 The EPA: A Federal Agency Limiting Itself

Under the Obama Administration, the Environmental Protection Agency was given broad authority to regulate economic projects, often targeting projects already approved by other agencies. EPA Administrator Scott Pruitt, as part of President Trump’s goal of cutting regulatory red tape, recently committed to reducing the EPA’s role in second-guessing projects that have already received permits from the Army’s Corps of Engineers. The Wall Street Journal reported on the impact of the new decision last week. Full Article: EPA’s Pruitt Wants to Limit His Own Agency’s Authority

The state of food regulation in the United States is one of confusion, complexity, and a particular brand of arbitrary rulemaking. Food lawyer, scholar, and adjunct law professor, Baylen Linnekin reviews the Trump Administration’s proposal to overall food safety regulations in a recent article for Reason Magazine. Linnekin makes the case for the necessity of reform, providing an excellent example of just one of many arbitrary distinctions: “frozen cheese pizzas sold at your local grocer are regulated by the FDA, while frozen pepperoni pizzas are regulated by the USDA”. Full Article: Trump's Proposal To Reform Federal Food Regulations Is Long Overdue

The Possibilities for Bank Regulation Reform

Are Entrepreneurial Success and Limited Regulation Tied Together?

Clyde Wayne Crews Jr., Policy Director at the Competitive Enterprise Institute, analyses recent studies conducted on the subject of entrepreneurship and regulation. Crews argues data demonstrates countries with fewer regulatory roadblocks tend to have higher amounts of entrepreneurial growth. Full Article: What Do Scholars Say About The Empirical Relationships Between Regulation And Entrepreneurship?

When examining the industries consumers tend to experience the most frustration dealing with, a common thread becomes visible: government regulation. When first implemented, many of the regulations on air travel, health insurance, and banking were meant to encourage fairness. Kevin D. Williamson, a writer for the National Review, argues market fairness is best found in consumer choice, instead of government regulation. Full Article: Asymmetrical Capitalism

The Environmental safety enterprise became given vast authority to adjust economic initiatives regularly targeting tasks already accredited by way of other groups. It makes the case for the necessity of reform providing an brilliant example of just certainly one of many arbitrary distinctions. http://www.getessaydone.com/