Our Founding Fathers clearly understood that concentrated power is a threat to individual liberty. As a result, they created a system of checks and balances to ensure that no single branch of government has absolute power. John Adams stated that “it is by balancing each of these powers against the other two that the efforts in human nature toward tyranny can alone be checked and restrained, and any degree of freedom preserved in the Constitution.”

In article 1, section 7 of the Constitution, the process of creating a new law is outline, putting authority with the legislation. Today, the omnipotent executive branch has disregarded these limits by enacting thousands of new regulations without proper approval from Congress.

It is hard to justify that unelected bureaucrats should have the power to enact costly regulations that have such an enormous impact on the economy. In 2009, the American people were forced to comply with 3,006 new rules and regulations issued by the executive branch. Every year, about 85 of these federal rules are considered “major rules” since they impose at least $100 million in annual compliance costs. In total, government regulations cost Americans over $1 trillion every year. As the Heritage Foundation graph below shows, the size of the Code of Federal Regulations that lists all federal regulations has grown to 163,333 pages. 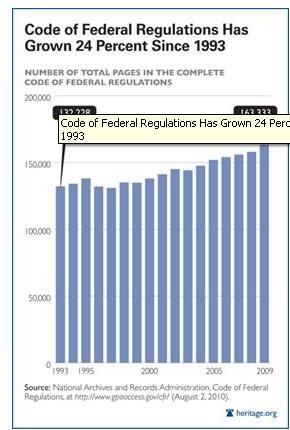 Yesterday, Senator DeMint (R-SC) introduced S.3826 Regulations from the Executive in Need of Scrutiny Act (REINS Act) that requires Congressional approval for all “major rules” proposed by the executive branch. In the House, Rep. Davis (R-KY) has introduced a virtually identical bill H.R. 3765, the REINS Act. According to Senator DeMint,

We must put a stop to the reckless and costly anti-free market regulations that are destroying jobs. When the Obama Administration hasn’t been able to ram their anti-job polices through Congress, they’ve empowered unelected, unaccountable bureaucrats to force them through using regulations.

The REINS Act is quickly gaining traction. In fact, in the newly released Pledge to America from the House Republicans it states that they will "require congresssional approval of any new regulation that has an annual cost to our economy of $100 million or more."

A recent CNN poll revealed that the majority of Americans believe that the federal government has become too powerful that it imposes a direct threat to the liberties of ordinary citizens. It is imperative to limit the excesses of executive power by giving elected officials a voice in all major regulations imposed on the American people.

Most of these federal government regulations do more harm than good. With unemployment at 9.6 percent, businesses and individuals should not be subjected to costly and potentially job-killing rules without approval from the people’s representatives. The REINS Act would help restore checks and balances to our system to prevent one branch of government from infringing on the rights of the people without recourse. FreedomWorks has already sent a letter in support of the REINS Act to every House and Senate office to help make all legislators aware. Please do the same by contacting your representatives and telling them to cosponsor the REINS Act in order to preserve the Founding Fathers’ vision for America!