To help Senators and activists prepare for this week's Senate votes on competing budget plans, FreedomWorks has prepared a handy cheat sheet.

We've done the research for you, carefully reviewing and "grading" each plan based on numerous important criteria.

For example, you can use this one-pager to see how quickly the various budget proposals will take to achieve balance.

Tea-party-aligned Senators Pat Toomey would balance in 7 years, for example; while Mike Lee's would balance in 5 years, Rand Paul's in 5 years, and the House-passed Ryan budget in a mere 26 years -- or only 10, depending on your economic growth-rate assumption. Note the high grades earned by President Obama and Senator Harry Reid! :) 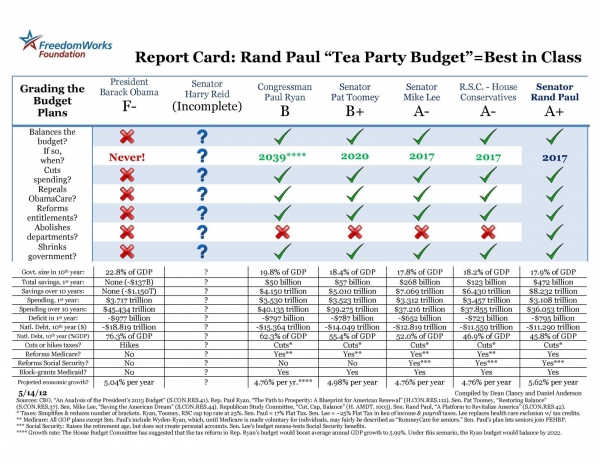 (Click on link image above, or the link below, for a full-size PDF copy of the chart.)

We first published this report card on March 26, 2012, prior to House consideration of the budget.

We have kept it up to date as new plans have been unveiled, most recently Sen. Mike Lee's plan (a.k.a. the Heritage Foundation "Saving the American Dream" budget).

To date, the Senate has failed to pass a budget for more than three years running.

Thanks to FreedomWorks research intern Daniel Anderson for helpfully compiling this handy chart.

TAKE ACTION: Sign the petition in support of the tea party Senators' budgets

TAKE ACTION: Tell your Senators to vote YES on the Toomey, Lee, and Paul budgets

Hello! Rand Paul is the only one that is in the ball park to me. I was thinking more like the Calvin Coolidge budget.

harry reid no way.he will never bring a bugest up or even do one. paul ryan ok but do not like his ideas that much. I want senator Rand paul to bring his bugest up on the senate floor.I do not care what harry reid says. he is done. our president bugest plan is no good. he is done.

0
09/02/2020
"For Liberty and Justice, Thank Rand Paul"
"https:\/\/www.freedomworks.org\/content\/liberty-and-justice-thank-rand-paul?social=facebook_share"
"Sen. Paul has continued to prove that he is a leader when it matters."
https://fw-d7-freedomworks-org.s3.amazonaws.com/styles/thumbnail/s3/field/image/FW-LibertyJusticePaul.png?itok=dCgHhmBh
Blog