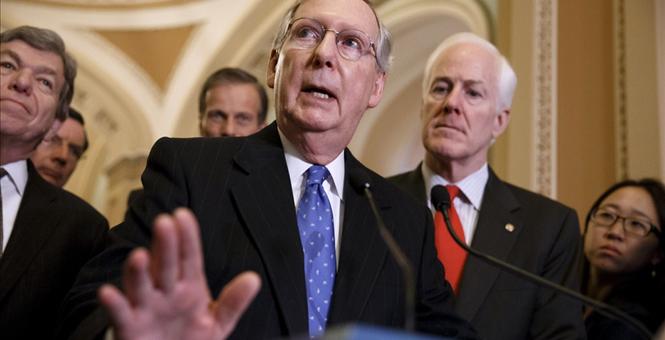 The ruling class of Big Business and their political partners are at it again, this time with a mammoth, bipartisan $85 billion two-year tax break bill moving through the Senate that would increase government spending for their mutual gain.

The Senate Finance Committee recently passed a “tax extender” bill that includes over 50 tax breaks for special business interests. Some of these loopholes include breaks for Hollywood studios, rum importers, wind production and NASCAR track owners, recurring items that were stuck into the 2013 Fiscal Cliff deal that expired at the end of last year. Others new additions include tax benefits for bike riding commuters, and a tax break for production costs of Broadway plays. Senator Charles Schumer (D-NY) is responsible for including these New York centric items in the bill.

It would be convenient to blame progressives like Senator Schumer for the spending spree in the tax extenders bills, but the reality is, Republicans are equally at fault. Senators Orrin Hatch (R-UT), John Thune (R-SD), Charles Grassley (R-IA) and Pat Roberts (R-KS) all played a part in pushing the bill through the Finance Committee.

Big-spending Republican Senators damage the limited government brand of the GOP. Their enabling of collusion between big business and big government is the driving force behind Tea Party efforts to challenge the political establishment and special interests that seek financial gain through the growth of government.

The hypocrisy surrounding spending is especially keen with Republican leadership and the big business community. Republicans talk about cutting the size of government, especially when they face a primary battle from the fiscally conservative right. But their rhetoric fails miserably when the time comes to take a principled stand to cut spending.

In February 2013, Senate Minority Leader Mitch McConnell (R-KY) and Senate Minority Whip John Cornyn (R-Tex.) introduced legislation to mandate a Balanced Budget Amendment to the Constitution. “The American people have paid enough of a price over the last few years for Washington’s recklessness, and passing a Balanced Budget Amendment to the Constitution would put our citizens back at the helm of our ship of state,” McConnell said in a statement.

About one year later, McConnell told reporters he opposed paying for the costs of the extenders bill in the budget, meaning the revenue loss would be added to the deficit. Clearly for Senator McConnell, talking about balancing the budget is easy, but fighting the tax extenders that would isolate him from his big business friends is simply too hard.

Companies like Goldman Sachs and General Electric have made significant campaign donations to McConnell over his long career, $108,000 and $104,000 respectively. Understandably, they are desperate to keep their special tax loopholes to keep investors happy and their executive compensation flowing.

The proposed tax extender bill also includes $10.4 billion for an active financing provision, which is crucial for companies that evade taxes on overseas financial transactions. This tax benefit is so important to crooked corporations like General Electric (GE) that the company goes so far as to list the possible loss of this tax loophole as a financial risk factor to its investors in its 10-K filing.

GE warns investors, “If this provision is not extended, we expect our effective tax rate to increase significantly after 2014.” Apparently scare tactics work, as GE’s lobbying operation has become so effective that the corporation paid little or no federal tax in some years. The company also benefits from other provisions in the extender bill, including the wind production tax credit.

Meanwhile, in an appalling display of hypocrisy, General Electric CEO Jeff Immelt talks about reducing government spending, and sits as a member of the “Fix the Debt” campaign to encourage fiscal reforms to lower the country’s debt and deficit.

There is no doubt that the Washington political establishment has been very generous to GE over the years. In addition to tax breaks, the company received about $20 million in grants from the Department of Energy in 2013, and about $100 million from Obama’s stimulus plan.

While the average taxpayer would be livid over giving grant money to a profitable, dividend-paying company like GE, that sense of outrage does not translate to Republican leadership. In fact, the opposite is true.

Threats to end corporate handouts and reform spending have enraged the establishment political class, who built their careers on making deals and exchanging favors with big business. It’s why the U.S. Chamber of Commerce and lobbyist Steve LaTourette’s Main Street Advocacy organizations attack pro-freedom primary candidates. They recognize that their careers of collusion end when the money stops flowing to the corporate coffers.

The best way to reduce the size of government and preserve America’s economic strength is to stop big-spending Republicans from doling out handouts to corporations. When K Street is weak, American families and small businesses are strong.

Here is one of the many areas where, amazingly, conservatives and progressives are actually on the same side. Both are very much against stopping "big spending Republicans (AND Democrats) from doling out handouts to corporations." We must not let important differences of opinion blind us to the many areas, such as personal liberty, that are interests of both conservatives and progressives.