Illinois Republican Party officials will vote May 19 replace the retiring Congressman Tim Johnson on the November ballot in Illinois' 13th District. Four candidates competing for the nomination gathered at a forum Saturday.  Party Chairmen in the district will have to choose between two candidates who focus on what the country needs and two others who focus on winning, no matter what they have to say.

The field (in order left to right in accompanying photo):

Grassroots activists would support enthusiastically either Wassink or Harold. Wassink is more outspoken and sure of her positions on issues, while Harold is more eloquent and prepared. Neither Davis nor Clarke would attract grassroots support outside their immediate circles.

Clarke, coming out for Project Labor Agreements for government contracts, has no business being in any legislature.

Johnson easily won the primary in March, then announced that he was retiring.

An undercurrent in the race is the battle between the grassroots and party insiders for control of the seat, as well as between factions within the Illinois establishment. Davis is thought to be a henchman for his mentor, Congressman John Shimkus (IL15).  Clarke has been a longtime political operative, including time as Johnson's Chief of Staff. Clarke is a member of the State Central Committee, the 18-members body that controls the Illinois Republican Party. 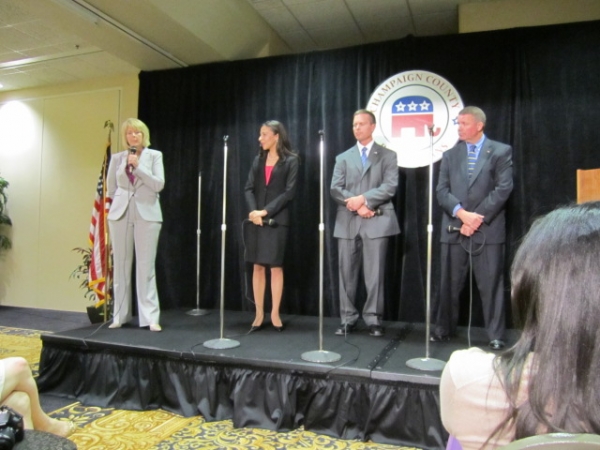 Johnson has not endorsed anyone in the race, which will be decided, per Illinois law, by a weighted vote of the fourteen Republican county chairmen with precincts in the 13th District.  Johnson made a point of saying none of his former staff, including Clarke, should get the nod:

“At my retirement announcement, I let people know that no one in my family or on my staff would be a candidate for the nomination,” Johnson added. “The exclusion of those individuals should also extend to my former staff as the Republican Party moves forward in the most open and honest way possible.

“Several highly qualified individuals have expressed interest in succeeding me. I believe a number of them can be successful in the general election,” he said.

None of the candidates has ever held elected office, other than party positions. Rodney Davis has been a candidate, narrowly losing mayoral and state representative races.

I spoke individually with the candidates, asking each whom they would support as Speaker and whether they support project labor agreements for federal contracts. None of them knew the questions in advance, nor did they hear the responses by the other candidates.

Q: Your first vote if elected is going to be for Speaker of the House. Who do you support for Speaker?

Wassink: "John Boehner's in there right now, and I'd have to see who else is running against him, quite frankly."

Harold: "That would depend on who's running. Someone I really admire is Paul Ryan. Probably if Speaker Boehner is who everyone coalesced around, I certainly wouldn't be looking to voting people out.  But Paul Ryan is someone who I have respect for in terms of putting forth big ideas."

Davis: "I don't know who's running. [...] We're going to find out who is running for Speaker after this election, and I hope to be one that's included and will be able to vote. I think I will be able to answer the question better when I get to that point."

Clarke: "You know, I have not put a second's thought into that at all. I'm just working on getting the nomination, and when I get to DC I'd listen to anybody that were running for Speaker."

Q: Do you approve of the job John Boehner has been doing as Speaker?

Wassink: (Asked "Are you satisfied..") Pause. "I think I am. I am to a degree. I was disappointed with the debt ceiling deal, quite frankly, and I am proud that Tim Johnson voted against it. I think we have got to get tougher. Michele Bachmann for Speaker of the House? Obviously. Paul Ryan, someone with lots of experience? Obviously. But if John Boehner was up, and we had no other viable candidate, then I would" vote for him. "But I would have to really look and see who is out there. It's kind of like this race. People are already putting people in spots before they have all of the contestants in the field. I don't think any race should have that, no matter if it's the Speaker, or here. We should say, 'Hey, let's see who emerges -- there are great candidates here -- and let's see who we get."

Harold: "I think there have been some ways in which he's been very effective in terms of instilling party discipline. I know there are some freshmen members who were not pleased, who wanted to stand independently against certain polices."

Davis: "I'm more satisfied with John Boehner's performance as Speaker than Nancy Pelosi's. I think what we have got to do is to elect somebody who has the courage to stand up to the Democrats but also to John Boehner and the Republicans when they're wrong."

Q: One of the first things Barack Obama did on becoming President was to give an Executive Order stating that federal government contracts should have a project labor agreement. Would you vote to overturn that order, and do you support PLAs for government contracts?

Wassink: Would "absolutely" vote to overturn the order. "First of all, I grew up in Texas and it is a right to work state. I was in my first adult years in jobs down there. Everybody should have the right to come in and get a job. It should not just be labor alone. I understand that labor needs to be there, too, but everybody has to be able to try. I go up against people for contracts every day, and that's just the game. You win some, you lose some. It shouldn't be a rule.

Harold: Without seeing any specific legislation, my inclination is not to force those sorts of things on government contractors.

Davis: I'd like to see the Executive Order. What we have to do is get Obama and the Democrats out of the White House to make sure they can't harass businesses in toThe PLA Executive Order? Yeah, I'd vote to overturn a lot of Obama's Executive Orders.

Clarke: I think PLAs have a place in trade unions and things like that with government projects. What I don't want is like in the state of Illinois we've got a lot of Missouri companies coming over and getting jobs that should be for people from Illinois."

Q: So you're in favor of having Project Labor Agreements for government contracts?

During the Q&A portion of the forum, the two Congressional aides made clear their desire to win, overshadowing any policy considerations or position statements they would make. Wassink and Harold distinguished themselves by carefully but clearly staking out conservative positions on most issues. Both women received frequent applause, while the few applause lines attempted by their mail counterparts failed awkwardly.

Grassroots activists clearly would choose either Erika Harold or Kathy Wassink as the Republican nominee for the 13th district of Illinois.