Contrary to the popular myth, Republicans have offered several alternatives to Obamacare, all of which were rejected out of hand by Obama and his cronies - while all the time they were saying they'd listen to any alternatives the Republicans had to offer. 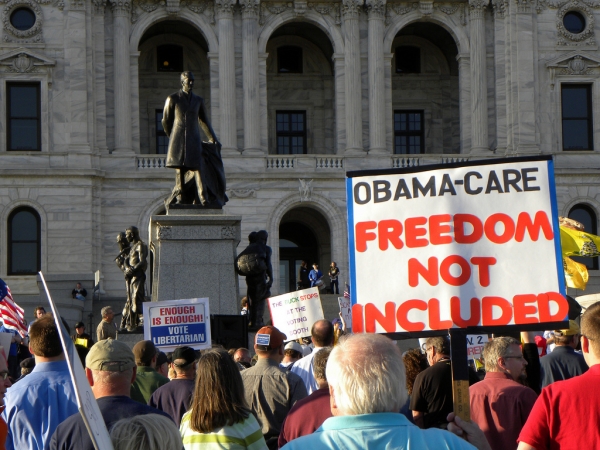 Phil Roe (R-TN), is working inside Congress to defund, repeal, and most importantly, replace Obamacare. In an interview Friday, he detailed his vision for getting rid of Obamacare (posted earlier), and he also discussed his replacement strategy. Roe, the Co-Chair of the GOP Doctors Caucus in the House, has co-authored a bill for the Republican Study Committee that would truly repeal and replace Obamacare. He was tasked with creating a bill that was revenue neutral, would lower health care costs, relied on free market principles, and didn't raise taxes. The bill has seven main objectives:

In the interview on Friday, Dr. Roe said that he fully expects the bill to be altered and amended, and described it as a starting point. In fact, he said he welcomes both Republican and Democrat ideas. His objective is to respond to the manifest desire of a majority of Americans to replace Obamacare with something that works, that won't need to be delayed and will lower costs. Roe said that some of these ideas were implemented at the state level back home, and reduced health care costs within a year of being passed. In particular, he cited tort reform as having an almost immediate effect.

Roe also believes that two aspects of this bill will create free market competitive forces that will drive costs down:

1. Expansion of tax-deductible Health Savings Accounts, which were gutted in the labrynthine Obamacare statute.

2. The large tax deduction for purchasing health insurance. As stated in the bill summary,

Creates a standard deduction for health insurance (SDHI)—an above-the-line tax deduction applied to both income and payroll taxes of $7,500 for individuals or $20,000 for a family—available to all Americans with qualifying health insurance. The SDHI can be applied to existing, employer-sponsored insurance or to the purchase of insurance on the individual or small group market. The SDHI will give families flexibility to pick coverage that best fits their needs and ensure that the tax benefit for insurance doesn’t go away if you lose or change jobs. The SDHI is intended to be revenue-neutral and is funded through the elimination of the tax exclusion for employer-paid health insurance and the self-employed health deduction. No change is made to employers’ ability to deduct payments for employees’ health benefits as a business expense. The SDHI will increase annually by CPI-U.

According to Dr. Roe, the SDHI could have a significant impact on costs. "The SDHI eliminates the current incentive to choose increasingly expensive plans by providing the full value of the deduction regardless of how expensive the plan is. For example, a family with a $15,000 plan would receive an additional $5,000 tax deduction. Based upon Kaiser Family Foundation data, the vast majority of Americans will receive a tax cut under this plan." Furthermore, there would be significant incentives to pool together in groups to buy plans, which would work towards reducing and ultimately eliminating plans tied to employment, increasing portability and reducing lapses in coverage. This would be combined with the expanded Health Savings Accounts, which would allow consumers to use their own money to buy their own treatments on the free market. The natural tendency to shop around - or as Dr. Roe puts it, the motivation to "pull across 6 lanes of traffic on the freeway to get to a sale" - would have a downward effect on prices. Another aspect of this bill would enhance this effect - making Medicare claims and payment data publicly available so that patients and taxpayers alike can better understand what they are being charged.

Roe admits that this bill is not perfect, but it reflects the desire of the RSC - and a majority of Americans - to return to a market based approach that does not intrude on the private relationship between patient and doctor.

Given the overwhelming numbers of Americans who want Obamacare repealed, the thousands of jobs being lost because of these onerous regulations, and the reelection prospects of a few key Democrats in 2014, Roe is optimistic that something can be worked out to finally repeal and replace Obamacare. Time will tell.

@torqueobama I think you're a bit confused on that one. The GOP is saying that the government shouldn't be using taxpayer dollars to fund a person's decision to kill their baby. Right now, the government is interfering but under this proposal, the government would be letting people make their own choices. If they cannot afford an abortion (which costs a few hundred dollars......far less than even the cheapest deductibles on Obamacare plans) then maybe they should think a little harder before engaging in behavior that would put them in the position to be considering that option. I only wish that an abortion was more expensive when I made the worst decision of my life 6 yrs ago and had one.....I bet I would've been more responsible in the first place instead of living with an unbelievable amount of guilt and regret that followed the abortion.

This is a great bill, and it will get absolutely no traction because it singles out abortion. The GOP is doomed as long as it believes the government has to interfere with a persons social decisions.

my co-worker's step-aunt makes $84 every hour on the laptop. She has been out of work for five months but last month her inℂOMe was $13091 just working on the laptop for a few hours. my link JOBS70.ℂOM