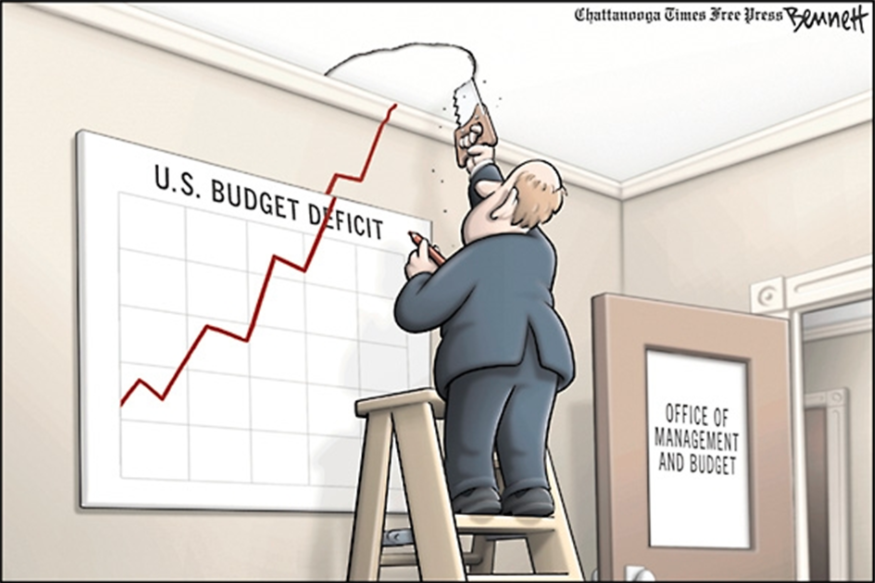 These spending levels will be the floor going into FY 2020, not the ceiling, to say nothing of mandatory spending, which is baked in the budgetary cake, and interest on the national debt, which is almost certain to increase as interest rates rise.

In June, the Congressional Budget Office released its regular budget outlook, in which it projected that the budget deficit would eclipse $1 trillion in FY 2022. The Committee for a Responsible Federal Budget estimates that the budget deficit will exceed that shameful threshold in FY 2019. Of course, the tax reform bill will reduce revenues to some degree, but Congress doesn't have a revenue problem; it has a spending problem.

After four years in the political wilderness, Republicans regained control of the House in 2010 on campaign promises of repealing ObamaCare and reining in federal spending. President Obama's White House came up with a plan that would trade an increase in the debt limit for either $1.5 trillion in spending cuts agreed upon by a bipartisan commission or $1.2 trillion in automatic cuts should the commission be unable to reach an agreement. In August 2011, the plan was codified into through the Budget Control Act, S. 365.

With the Budget Control Act in place and the economy slowly recovering from the recession, the budget deficit began to decline, reaching its lowest point as a percentage of gross domestic product in 2015, at 2.6 percent. Although President Obama proclaimed that he would "veto any effort to get rid of those automatic spending cuts to domestic and defense spending," he quickly changed his tune and called for some of the cuts to be restored. He wasn't alone. Then-Speaker John Boehner (R-Ohio) also wanted to roll back the spending cuts, writing in February 2013 that "a dramatic new federal policy is set to go into effect that threatens U.S. national security, thousands of jobs and more."

As the United States approached a purported crisis at the beginning of 2013, dubbed the "fiscal cliff," Congress delayed the start of the sequester to March 1, reducing the spending cuts by $24 billion. In 2013, Congress passed the Bipartisan Budget Act, H.J.Res. 59, referred to some as the "Republican Surrender Act." The law increased spending by $45 billion in FY 2014 and $18 billion in FY 2015.

One of the architects of the Bipartisan Budget Act of 2013 and Bipartisan Budget Act of 2015 was Speaker Paul Ryan (R-Wis.). At the time, Ryan served as chairman of the House Budget Committee. He worked with his Senate counterpart, then-Budget Committee Chairwoman Patty Murray (D-Wash.), to reach an agreement. This is the same man who once so strongly took up the cause of entitlement reform.

"We have before us the most predictable economic crisis that we have ever had in this country. We all know that. We also are getting a good grasp of the size and the magnitude of this crisis," Ryan said in April 2010. "Sovereign debt crises are popping up all over the world, and we are kidding ourselves if we don’t think it could come to us next."

With the passage of the spending bill last week, it's clear that Republicans have retreated on fiscal conservatism. It's an ominous sign for fiscal conservatives who were hoping to see legislative action this year on welfare reform or hope to see at least some measure of discussion about entitlement reform, which is the real driver of budget deficits and debt.

Sadly, Republicans can't even hold strong on one of their biggest accomplishment, the Budget Control Act, when given the choice of increasing defense spending. The irony is strong, though. Admiral Michael Mullin, who served as chairman of the Joint Chiefs of Staff, once warned, "The most significant threat to our national security is our debt." Republicans may have made the United States less secure in the long run by increasing spending and budget deficits, all for their precious defense spending.