Republicans Must Stop the Left's Newest Assault on Election Integrity 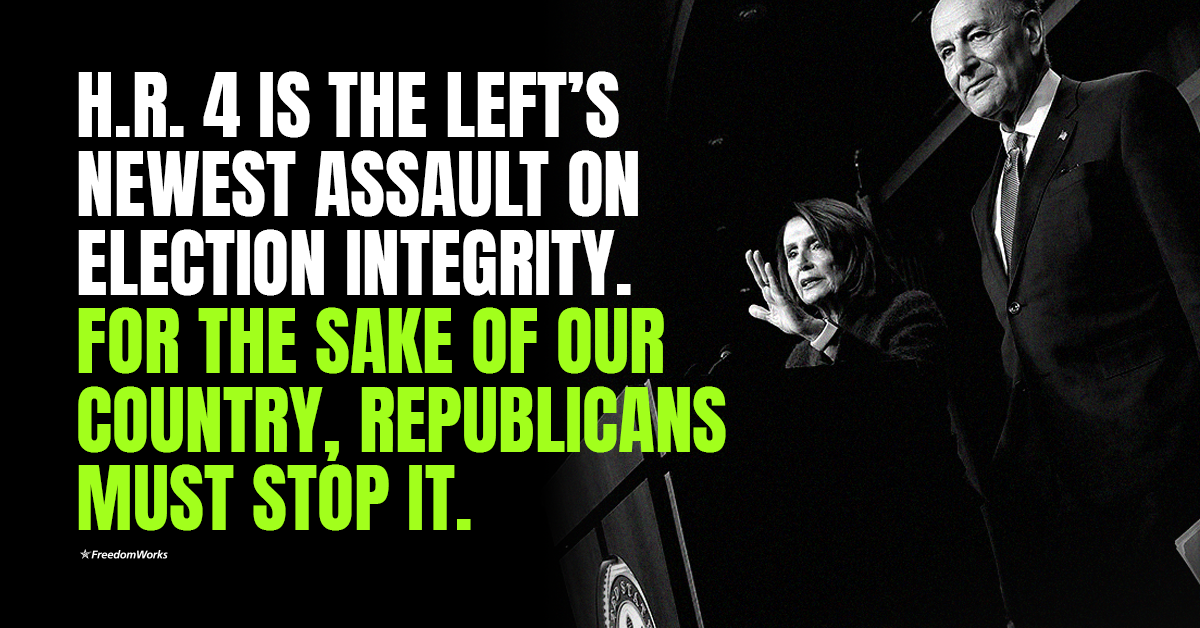 A few weeks ago, Democrats in Washington were on the verge of passing a sweeping piece of legislation that would have put them in the driver's seat to determine the outcome of elections. This unprecedented power grab, laughably titled the “For the People Act,” was thankfully defeated.

But now, America is facing yet another threat to election integrity from the far left.

It’s clear Democrats saw the For the People Act, or H.R. 1, as a way to transfer power away from states to leftist bureaucrats in Washington.

It was an integral part of the left’s plan to consolidate power prior to the 2022 midterms and the next presidential election. With motives as corrupt as this, it would be surprising if Democrats simply abandoned their effort to undermine our election system upon the defeat of H.R. 1.

Predictably, they’ve done just the opposite.

The left’s newest plan is to pass the John Lewis Voting Rights Advancement Act, or H.R. 4. This bill is just as dangerous as H.R. 1, and in some ways it’s an even bigger threat to election security.

H.R. 4 seeks to implement many of the same unpopular, reckless provisions that were included in H.R. 1. Every voter should know precisely what this legislation contains, as it will allow them to recognize the massive threat to election integrity it poses.

First of all, the bill puts the Justice Department in charge of changes to state election laws. President Biden and his leftist allies have shown an eagerness to weaponize the federal government against their political opponents while in power.

There’s no doubt that if H.R. 4 is passed, President Biden’s Department of Justice would use their new authority to go after every Republican state that resists the far left’s efforts to undermine our elections.

This is just the beginning. H.R. 4 would also allow the federal government to step in and block common-sense election safeguards like voter ID laws. Recent polls from Fox News and Monmouth University show that nearly 80% of Americans think voter ID laws are common sense.

While leading Democrats like Stacey Abrams have flip-flopped on the issue of voter ID in recent months, there’s no doubt the left will do all it can to ban it nationwide if given the power to do so.

Regardless of their outcome, these lawsuits would be used as justification by the federal government to take away a state’s authority to supervise their own elections.

All of this may be starting to sound familiar. H.R. 4 is strikingly similar to H.R. 1, so the left’s efforts to federalize elections likely aren’t surprising to the millions of Americans who have been following this debate.

It’s clear that the fight to protect our elections is far from over, and we’re seeing in real time how far Democrats will go to make sure they can maintain their grip on power.

Democrats think they can benefit from chaos at the polls, as we saw in 2020 when longstanding election laws were cast aside, ostensibly because of the COVID-19 pandemic.

That’s why they’re pushing harder than ever to make our elections less secure. If the federal government can prevent states from requiring voter ID, or legalize the corrupt practice of ballot harvesting nationally, there is no doubt that the left will remain in power for the foreseeable future.

That’s exactly why conservatives, and everyone who believes in secure elections, must stand up against H.R. 4.

Regardless of whether they’re on the right or left, every voter should all be able to trust election results.

If H.R. 4 is passed, there is no doubt that millions of Americans will question the outcome of every election going forward, particularly if it’s a close race.

H.R. 4 is the left’s newest assault on election integrity. For the sake of our country, Republicans must stop it.

FreedomWorks Statement in Response to House Passage of H.R. 1