Looking for information on Paul Ryan's budget plans and the "Ryan Roadmap?" Look no further. 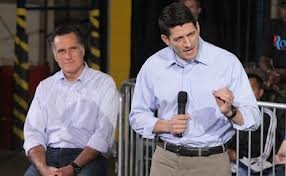 We've compiled this list of links to help activists, bloggers, and journalists learn more about the policy vision of Paul Ryan, the young conservative and legislative entrepreneur whom Mitt Romney has chosen as his running mate.

The three basic iterations of the Roadmap are presented in reverse chronological order, from newest to oldest.

The third distinct iteration of the Ryan Roadmap looked much like the second, but modified the Medicare reform section to preserve original, 1960s Medicare alongside Ryan's proposed new, competitive ("premium support") model, which would compete with private plans for seniors' business in a new Medicare "exchange" managed by the Medicare agency. (This approach is sometimes called "Wyden-Ryan," for its two co-authors Sen. Ron Wyden (D-Oregon) and Rep. Paul Ryan (R-Wisconsin).)

Roadmap 3.0 passed the House in the form of H.Con.Res.112 on March 29, 2012, by a vote of 228 to 191. Ten House Republicans voted against the resolution. No House Democrats voted for it. A more fiscally conservative alternative was also offered, by the House conservative caucus, the Republican Study Committee; but it failed.

The Senate rejected Roadmap 3.0 (H.Con.Res.112) on May 16, 2012, by a vote of 58 to 41. Five Senate Republicans voted against the resolution. No Senate Democrats voted for it. Three more fiscally conservative plans were also offered, by Senators Pat Toomey (R-Pennsylvania), Rand Paul (R-Kentucky), and Mike Lee (R-Utah); but all three failed. Senate Democrats did not offer a budget plan of their own.

The second distinct iteration of the Roadmap -- introduced after Republicans had taken control of the House and Ryan had become chairman of the House Budget Committee -- differed from the first interation in several key ways. It added a provision to fully repeal ObamaCare (which had been enacted in March 2010), and it dropped universal health insurance tax credits, Social Security personal accounts, and the increase in the Social Security retirement age.

Like the ObamaCare law, Roadmap 2.0 proposed to reduce Medicare spending by $500 billion over the first ten years, although notably by means of Ryan's "managed competition" reform rather than the Democrats' across-the-board Medicare payment cuts and bureaucratic rationing. The Medicare reform in Roadmap 2.0 was largely unchanged from its predecessors; but once all House Republicans voted for it, it immediately became the object of intense attack by Democrats, who (misleadingly) accused Republicans of "ending Medicare as we know it" and (falsely) of "ending the Medicare guarantee."

The income tax portion of the plan was thoroughly overhauled. Both the taxpayer choice provision for individuals and the VAT-like consumption tax for corporations were dropped. In their place, the plan generally described an individual and corporate income tax system that would be simpler and flatter than the existing code, with a top rate in both systems of no more than 25 percent. To avoid losing revenue, the plan assumed the elimination of numerous tax credits, deductions, and exemptions, but did not specify which ones. Mathematically speaking, to achieve a 25 percent top rate, virtually all existing credits, deductions, and exemptions would have to go.

Roadmap 2.0 passed the House in the form of the bill H.Con.Res.34, popularly known as the Ryan Budget, on April 15, 2011, by a vote of 235 to 193. Four House Republicans voted against the resolution. No House Democrats voted for it. A more fiscally conservative alternative was offered, by the House conservative caucus, the Republican Study Committee; but it failed.

The Senate rejected Roadmap 2.0 (H.Con.Res.34) on May 25, 2011, by a vote of 57 to 40. Five Senate Republicans voted against the resolution. No Senate Democrats voted for it. Two more fiscally conservative alternatives were also offered, by Senators Pat Toomey (R-Pennsylvania) and Rand Paul (R-Kentucky); both alternatives failed. Senate Democrats did not offer a budget plan of their own.

Roadmap 1.1, introduced in 2010, looked much like its predecessor, but added provisions to: 1) raise the Medicare retirement age to 69.5 by 2021; 2) index future increases in the Social Security retirement age to grow with projected lifespans, thus likely increasing it to age 70 by the year 2100.

The original Ryan Roadmap -- introduced in 2008, when Democrats controlled the House and Senate -- included a number of bold reforms to reduce spending and avert America's entirely foreseeable debt crisis. It constituted a comprehensive, integrated package, unified by an optimistic, conservative vision. Its reforms included the following: Accelerate the currently scheduled increase in the Social Security retirement age to 67, by 2021. For seniors aged 55 and under, gradually reduce the future growth of promised Social Security benefits (more so for higher-income retirees than for lower-income ones). Create optional Social Security personal accounts. Modernize Medicare into a competitive "premium support" model based on the existing Medicare Advantage program, for seniors then aged 55 and under, beginning in 2022. Block-grant Medicaid and SCHIP back to the states. Convert the existing tax-code subsidy for employer-provided health benefits into a "managed competition" system of universal health insurance tax credits coupled with health care "exchanges" and certain federal regulations. Establish spending reductions targets, to be enforced by sequesters (automatic, across-the-board spending reductions, should the caps be exceeded). The plan also overhauled the tax code, in two ways. It transformed the individual income tax into a Taxpayer Choice system, allowing taxpayers to choose between paying their income taxes under the existing tax code or under an alternative, simpler, flat-rate system. And it replaced the existing corporate income tax with a new, VAT-like consumption tax. The plan assumed that future tax revenues will remain indefinitely in the range of 18 to 19 percent of GDP.

Roadmap 1.0 did not specify any agencies for elimination. Nor did it balance the budget, except in the distant future, under certain optimistic assumptions. But it did reduce long-term borrowing sufficiently to forecast a spectacular reduction in the national debt as a share of national output, relative to current law, over the next four decades.

Thanks for the links. As I become more involved in our grassroots efforts to fire Obama, I will need such information.

Where are the links for people to find out more about Ron Paul? The Republican Convention hasn't been held yet!