SC Candidate Forum: A Testament to the Bottom-Up Grassroots Model

FreedomWorks teamed with South Carolina’s grassroots activists to host a two-hour candidate forum in the state’s 1st Congressional District. On Saturday, February 16th, 16 candidates vying to fill the seat formerly held by Senator Tim Scott met at the Embassy Suites Hotel in North Charleston for a substantive policy discussion. A range of individuals—state-level politicians, small business owners, local activists and a former governor—fielded questions on pressing political and legislative matters. While each candidate advanced a unique approach to dealing with America’s deficits and debt, all agreed that the nation’s future demands an appropriate solution. 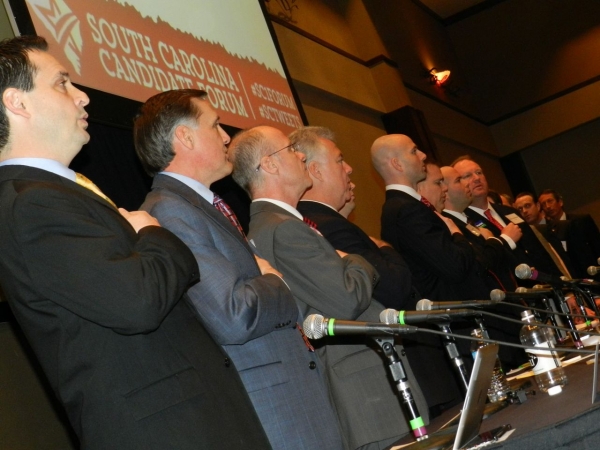 FreedomWorks President and CEO Matt Kibbe kicked off the afternoon by describing a battle for the direction of the Republican Party: “There’s a fight going on for the soul of the free-market, conservative, limited government movement. There are some guys in Washington—guys like Karl Rove—who think they should decide who our candidates are for Congress.” In contrast, events like this candidate forum offer testament to FreedomWorks’ bottom-up, grassroots model that emphasizes the role of the informed individual.

With over 300 engaged citizens in attendance, South Carolina’s electorate will command control of the election process. A small group of political consultants in the nation’s capital will not select the GOP nomination for the 1st Congressional District—the people, themselves, will make the call. FreedomWorks also streamed the forum in real-time using Live Events technology, helping to involve more citizens in the democratic process.

Each candidate received 60 seconds for an opening statement. Following introductions, moderators Easton Randall and Lauren Martel posed a series of rapid-fire questions for the candidates, touching on a variety of subjects including a balanced budget amendment, defense spending, crony capitalism, and school choice. Viewers following along on Twitter and the live-stream also had an opportunity to pose questions to the candidates. And at the end of the afternoon, each candidate was afforded one minute for a closing statement.

These forums have proven to be a critical instrument in FreedomWorks’ mission to repopulate the Republican Party with bold reformers in the mold of Mike Lee, Tim Scott and Ted Cruz. Grassroots activists select better candidates than the political elites in Washington D.C, because they understand the issues that matter most. With any luck, South Carolina’s candidate forum will help activists coalesce around one contender—the best candidate for their constituency.

With the help of South Carolina’s engaged base of activists, the candidate forum was a fantastic first step in electing a suitable successor to Sen. Tim Scott. To preserve the future for the next generation, America must chart a new course—and the next representative from the 1st District must be a leading member of this growing freedom movement.