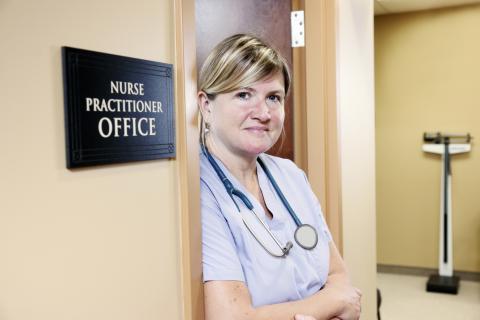 In most states, she's not allowed to write you a prescription.

In my continuing crusade against the evils of occupational licensure, allies have been hard to come by. Most people take for granted the idea that licensing laws protect consumer welfare against unqualified professionals, and view any challenge to their legitimacy as some form of dangerous lunacy. This is particularly true in the medical profession. While the absurdity of requiring licenses for hair braiders or interior decorators may be relatively easy to convey, medical practice has such a high potential for danger that arguing for any reduction in regulations strikes people are reckless.

In a new working paper from the Mercatus institute, however, Edward Timmons joins the fray, demonstrating that many licensing restrictions on medical providers exist not to protect consumer welfare, but to limit competition among doctors, resulting in higher prices and less choice for consumers.

In his piece, Timmons focuses on scope of practice laws, which limit the types of procedure a person can perform. A physician’s assistant or a nurse practitioner are generally barred from performing many of the services of a general practitioner. Perhaps the most conspicuous difference in these practices is that, in most states, only full fledged physicians are authorized to prescribe pharmaceuticals. It’s understandable why there might be some hesitation in expanding prescription authority for dangerous drugs like oxycontin, especially given the country’s current focus on opioid addiction, but there are plenty of non-addiction medications, such as penicillin or blood pressure medicine, that millions of people need.

Under current law, these people are forced to clog up doctors’ offices in order to get their prescriptions. Since doctors’ time is finite, this results in reduced access for everyone else, not to mention higher costs. Loosening of scope of practice laws would allow nurse practitioners and others to fulfill the need for prescription refills while allowing physicians to concentrate on more urgent matters.

One of the major problems with the health care sector is that would-be-reformers tend to focus only on one aspect fof the incredibly complex system while ignoring others. For example, ObamaCare is focused almost exclusively on the demand side of medicine, and in particular the insurance market. Even if that law had not been a catastrophic failure - which, make no mistake, it has been - it would still only be addressing one piece of the puzzle. The supply side of medicine is equally important, where a slew of federal and state regulations restrict the ability of people to provide medical services for those that want them. Politically, this has not been a fruitful area of reform, because there’s no one silver-bullet policy that will make everything better. These laws and regulations have to be tackled one by one, and that doesn’t make for a good sound bite. But a thorough reexamination of medical licensing and scope of practice laws would certainly be a good start.